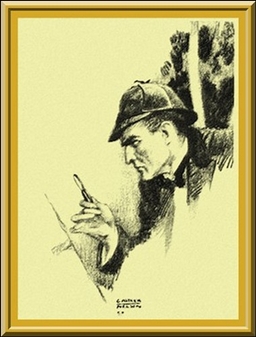 Part of the fun of being a Sherlockian (I use the term to mean someone who has read the stories and delves into them, studying and possibly writing about them: not having watched the BBC television show Sherlock and expounding the wonders of Benedict Cumberbatch) is speculating on the stories. In a post last November, I posed that perhaps Holmes was actually fooled by Lady Brackenstall in “The Adventure of The Abbey Grange.”

I don’t think that actually happened, but in Playing the Game, I laid out what I thought was at least a plausible scenario for it. Similarly, I pondered the possibility that Holmes set himself up in the blackmailing business after matters were concluded in “The Adventure of Charles Augustus Milverton.” Now, I don’t believe what I wrote in that one at all, but it was fun and it’s not impossible (just preposterous).

So, I ask you, is it possible that Holmes had a blind spot regarding the fairer sex and that he once again was duped by a pretty woman?

Though frankly, if you’re reading this post and you haven’t read “The Problem of Thor Bridge,” I’m a little perplexed. But click on this link and read it. It won’t take long.

Neil Gibson admits that he no longer loves his wife, Maria. “My love faded,” he says. He attempted to “kill her love,” or to “turn it to hate.” But Maria, terrible wife that she was, remained in love with the man whom she left her county and family for. She adored Gibson just as she had twenty years before when they met. He was harsh, even brutal towards her, but she remained “as devoted as ever.”

The stage is set for the third party to enter and complete the love triangle. Grace Dunbar answers an ad for a governess. She is by all accounts beautiful and Neil Gibson brings her aboard. Did Maria Gibson protest this? Probably, but to no avail. A rival has moved in. There is no mention of a suitor for Dunbar, and we can speculate that a live-in governess is probably not a woman of means. 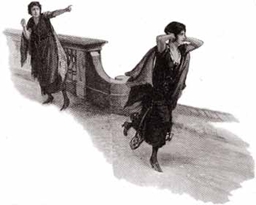 Gibson, who has been trying to drive off his wife and treats her cruelly, is instantly attracted to this attractive new woman in his life. She probably gets on well with the children, which might make her even more desirable, though from what we know of Neil Gibson, that probably wasn’t too important.

Maria Gibson, now alone far from her homeland, unloved by her husband, watches this seeming succubus now win over her children, day by day. Not knowing what to do, she simply watches the erosion of her life.

Meanwhile, Gibson secretly woos Grace Dunbar. His forceful personality and loads of money make him difficult to resist. Either willingly or grudgingly, Dunbar gives in to his attentions and becomes his mistress. Maria Gibson, like Lady Brackenstall in “The Abbey Grange,” is an impediment. Her peculiar condition; that of being alive, keeps the two illicit lovers from the life they wish to lead together. Gibson already has riches; he just needs to get rid of his wife to live happily ever after with Grace Dunbar. Maria Gibson must die.

But how to achieve the desired end? Gibson’s life is a story of success. He will dispose of his wife in a way that does not risk his future with Dunbar. The two lovers concoct a bold plan.

Neil Gibson makes it known to his wife that he has a meeting that evening. He is his usual rude self and tells her nothing more.

The next step is to leave a note, ostensibly to him, where Maria Gibson will find it. The note reads “I will be at Thor Bridge at nine o’clock.” You can bet that she will go there to confront her husband and this woman.

Gibson gives Dunbar one of a pair of pistols to hide in her room, which she does secretly. Dunbar openly goes to the meeting, making sure that she is seen on the way. Neil Gibson also makes his way to the bridge, though unobserved. Maria Gibson is there, waiting, when Dunbar arrives. She is surprised that her husband is absent, but she unleashes a blistering verbal assault upon the interloper to her household. Dunbar attempts to both stoke the fires of passion in her rival while also avoiding a physical confrontation.

Neil Gibson approaches from behind his wife, unnoticed as she unleashes her sound and fury. He reaches her unnoticed, though this is not vital. It does make things easier and he shoots her in the head. Gibson and Dunbar then stage events, disposing of the gun in exactly the fashion Holmes deduced. Maria Gibson is dead, the bridge is chipped and the gun is in the water. ‘Wait a minute,’ you ask. ‘Surely the bridge was chipped by accident. That doesn’t help the killers.’ 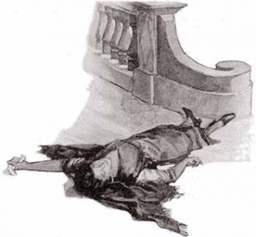 Au contraire. The chip in the stone bridge is as vital to the plan as the note with Grace Dunbar’s name on it. Gibson and Dunbar expected Maria Gibson to bring the note with her to the bridge, to be found on the body. She likely waved it in Dunbar’s face during her tirade.

It is a disguised suicide. Gibson can’t expect the local police to find the chip in the bridge. Grace Dunbar will be arrested. Sherlock Holmes is brought into the case to find evidence removing suspicion from Dunbar. Money is no object. Holmes, the pre-eminent consulting detective in the world, will surely notice the chip. Assembling the pieces of the puzzle, he conducts the experiment described by Watson, resulting in discovery of the water-logged pistol and the release of Dunbar.

Neil Gibson and Grace Dunbar murder Gibson’s wife, Maria. They make it appear as if Dunbar is guilty of the crime. Gibson then hires Sherlock Holmes, whose brilliance leads to the exact results the American millionaire sought. Poor Maria Gibson comes off looking like a sad, desperate woman. Whatever sympathy she might have expected is forfeited because she attempted to frame the ‘innocent’ Grace Dunbar.

After a suitable mourning period, Gibson weds Dunbar. The facts are still as Watson presented them, but in reality, Sherlock Holmes has been outwitted in this case.

It’s Elementary – I’ve only ever seen one episode of CSI, but it was Who Shot Sherlock. The solution to the murder comes directly from this story.

I really wish that Peter Cushing’s 1968 version of this story had survived.

Back in those days, to save money, the BBC routinely “wiped” tapes and recorded with them again. Most of the episodes in Cushing’s Holmes series suffered this fate and seem to be lost.