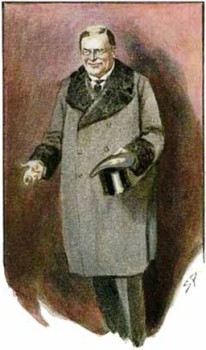 Far more than with any other character, Sherlock Holmes has been treated as if he had really lived. It’s not just that people believe in the character as they read the story. That’s usually the case in good fiction.

But there are hundreds of books that treat Holmes and Watson as if they were alive. Speculation about Holmes abounds. No other character’s life is explored in such detail, expounded upon and speculated about.

This treating Holmes (and Watson) as if he were a real person is called, ‘Playing the Game.’ And there’s no shortage of Holmes fans that have done it in new stories and scholarly writings about the great detective. An example of my own follows.

If you haven’t read it before, I strongly suggest you do so before reading the rest of this post. It won’t take you very long. The fifty-six short stories are quick reads.

Milverton is a master blackmailer. No one is better at it. Sherlock Holmes tells Watson that Milverton is the worst man in London. For someone who seemingly knew about every type of depravity and ruffian in the city, that is quite a statement.

Me thinks he doth protest too much. Was Holmes really so disgusted by blackmail? Or was it Milverton himself that displeased him?

Holmes informs Watson that he intends to burgle Milverton’s house to obtain the documents so compromising to Lady Eva Brackwell. Watson assumes that he will assist. Holmes tells him “You are not coming.”

Watson objects and Holmes responds with “You can’t help me.” Watson continues to insist and Holmes, who had “looked annoyed,” gives in and claps Watson on the shoulder, looking to make the best of a bad situation. But why is it a bad situation?

Holmes has already infiltrated the Milverton household by seducing Agatha, a maid. He must have been quite charming, since she became engaged to him after only a few meetings.

Securing the knowledge he needed, Holmes is ready to move forward. I assert that he intends to sneak into Milverton’s house, kill him, steal all of the incriminating documents in the office, and then engage in a second profession.

Holmes will use the documents to secretly blackmail the victims, nicely supplementing his income as a consulting detective.

Watson can only report Holmes’s motives as they appear to him. Were Holmes not shackled with Watson’s company, a different story might evolve, such as the following: 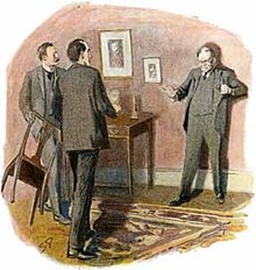 In addition to his first-class, up-to-date burgling kit, Holmes brings a gun. Perhaps the nickel-plated jimmy is accompanied by a nickel-plated revolver.

Holmes knows that the ‘beast of a dog’ Milverton keeps is locked up by Agatha, who is expecting Holmes (code name, Escott) for a late-night assignation. Sans Watson, he gains access to the house in the same manner recounted in the story (removing a pane of glass and reaching inside to open the greenhouse door).

He silently crosses to a door, passes through it into another room and enters a short passage. He listens carefully at the door, enters and here events can follow one of two paths: either Milverton is in the room or it is empty.

If Holmes heard more than one voice in the room, he would wait until only Milverton remained or the room emptied.

If Milverton is in the room, Holmes brandishes the gun and then knocks him unconscious. He opens the safe and takes all of the documents he can carry, secreting them about his person and/or putting them in a pouch he brought for that purpose.

All that remains is to kill Milverton, making it appear as if his death was a burglary attempt gone awry, or an affair de coure with tragic consequences.

If the room is empty, Holmes opens the safe and takes the documents as described above. He then makes a noise that draws Milverton into the room. He shoots him and stages the scene as above.

Milverton is dead and no one knows that Holmes now has all of the incriminating materials. He can stretch his blackmailing efforts out across years.

With his fine reputation in the community and his seemingly limitless contacts in the seedier side of London, he is perfectly situated to ensure his own anonymity in his lucrative side business.

If any Sherlockian can establish a plausible case that the Milverton affair occurred before the Great Hiatus (1899 seems to be the most common belief), perhaps the real enmity between Holmes and Moriarty sprang from the former running a criminal enterprise that should have rightfully belonged to the latter.

Thus, I posit that Holmes went to Appledore Towers to kill Milverton, abscond with all his documents and set up in the blackmailing business. Now, do I believe this? No, of course not! But it’s fun to play the game.

This story was used as the basis for the final episode of season three for the BBC Sherlock,starring Benedict Cumberbatch as Holmes. Before that, a two-hour version was made for Jeremy Brett’s Holmes series and there have been others. It’s a popular story because of its slimy villain.

I’d imagine keeping up this Jekyll-and-Hyde persona – Supersleuth by day, Blackmailer by night – would generate its own problems. Holmes the detective tries to expose the culprit. Holmes the blackmailer would try to blackmail him or her. It’s doable, though-

The Case of the Missing Mojo

You describe all Holmes’s subsequent cases but some have a different outcomes*- Holmes doesn’t solve them. Watson is mystified and uses his own limited powers of detection to get to the bottom of the mystery. A horrifying truth emerges: Holmes secretly identified the culprit in all the cases, but chose to blackmail some rather than identify them – those who might prove useful to him. Why? He’s building an empire to equal that of his nemesis Moriarty, and this is how he recruits his new employees. Why? His infatuation with Irene Adler means he has gone over to the dark side.

* or any that are relevant to Holmes’s new storyline. The cases that Holmes’ doesn’t solve would be significant, as each unsolved case would reveal the specific skill-set he’s looking for and – by extension – Holmes’s masterplan. With the qualification that some of his richer victims may simply be a source of start-up capital.

Heh. I recall some sort of quote by Holmes along the lines of, “The world is fortunate I chose to work for the law rather than become a criminal.

He certainly would have been the most successful one of all. It’s believed that Moriarty was partly based on Adam Worth, a criminal mastermind. Holmes would have made him look like a piker.

Realistically, Holmes would never become a master criminal because of some stupid infatuation or for the money. His reason would have to be idealogical.

The ‘Holmes as thief’ idea was at the root of an episode of the Sherlock Holmes series starring Ronald Howard. Though it was a trick, of course.

BTW, while many of the scripts were bad and the series was cheaply made, Howard is an underappreciated Holmes. He played a younger, more humorous Holmes than the ones before. Ian Richardson would remind me of Howard years later. The entire series can often be found for $5 on DVD and is worth it.