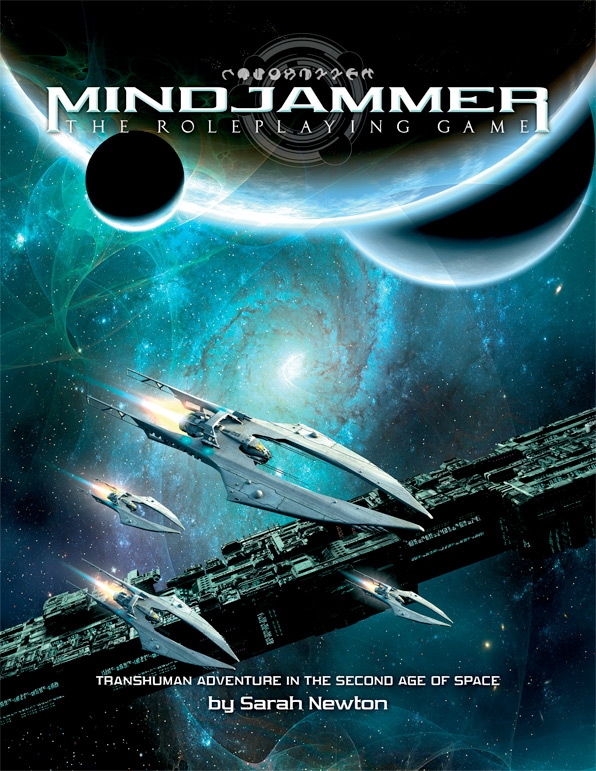 Longtime Black Gate visitors and readers might remember a time, long ago, when  I gushed about a great new FATE powered science fiction role-playing game, Mindjammer. Back then, it was an expansion for the excellent space opera setting Starblazer Adventures.

Now it’s an animal on its own, and was nominated for two Ennies (the role-playing award handed out each year at GenCon) just this year. I can see why.

I was already impressed with Mindjammer. Back in 2010 Sarah Newton did a fabulous job creating strange new societies and making the far future gameable, including the concepts of neural implants, synthetic humanoids with thanograms (deceased human personalities), sentient starships, and other impressive ideas.

The new edition of Mindjammer has more than doubled in size. And while some of that is because it’s no longer an expansion, but a book that is complete in itself (with all the FATE rules customized for the setting) a lot of it is because Newton took Mindjammer concepts and expanded them even further.

Character creation, ship design,  — every rule, really — is tailored specifically for Mindjammer‘s setting, and in even greater detail than before. I was already taken with the planetary/setting generation section last time. She takes it even further, making it that much easier to randomly generate places and situations that will evoke awe in play.

The book itself is gorgeous. It’s a thick hardcover (complete with bookmark!) and the inside front and back cover have lovely full color maps of important planets in the Commonwealth.

Near the back of a book is another color section featuring important planets of the sample space subsector used for play.

If you’re at all curious about a role-playing game that simulates the far future as it might one day be rather than the rocket blasting, ray gun toting space opera games we so often see (not that there’s anything wrong with them!) Mindjammer ought to be your first stop.

And lest you think that it’s somehow bereft of fun because it is a little more plausible, rest assured that it oozes adventure. Scenario hooks are sprinkled throughout the text, and story ideas blaze up from nearly every page.

I had the pleasure of being GM’d by Sarah a couple of years back. The game rocks!