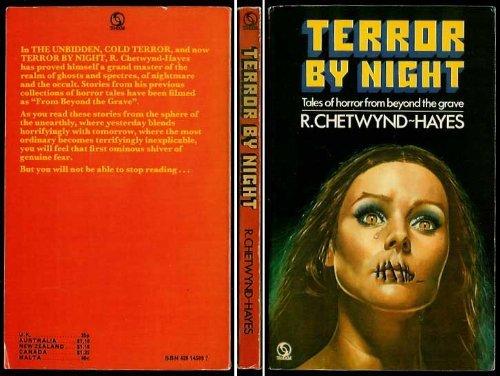 I’m reasonably familiar with the horror and SF genres, but I have to admit that the name R. Chetwynd-Hayes didn’t ring any bells. But the kind of tacky cover — and the fact that this collection dated from 1974, before the great horror boom of the Eighties kicked in — was enough for me to take this one out for a spin. Chetwynd-Hayes wrote about ten novels and many more collections during his long career, most of them in the horror genre but some leaning more toward SF.

I’d place most of the stories in this collection in the category of solid but not exceptional, with the exception of a pair of stories that stood out. I liked it well enough that I’ll be keeping an eye out for more of his books in the future. I’ve listed all of the stories but only reviewed the ones I found interesting.

It was totally coincidental that I was reading a werewolf story at the exact time of the recent blood moon eclipse. Werewolves and vampires normally don’t do much for me but by the time I got far enough into this story to realize what it was about, the author had me on the hook. His protagonist has been plagued by a flat tire while on a bike trip and sets out to find a tea room he’d seen a sign for earlier. Chetwynd-Hayes does a great job of creating a creepy atmosphere, so much so that by the time the other characters turn up it’s almost an anti-climax. But as werewolf stories go (keeping in mind that I’m no authority on the topic) it’s not a bad one.

After a fairly somber werewolf story things take a turn with this ghost story with a decidedly whimsical bent. The Earl of the title has been haunting the castle he once inhabited and only the daughter of his descendant can see and interact with him. Turns out the current Earl is having a run of bad luck and the castle is about to be sold to cover his debts. A plan which the old Earl doesn’t exactly approve of.

“Where Yesterday: A Modern Fairy Story”

Another somewhat whimsical tale that takes a decidedly fantastical view of the nature of time. It’s all about a man who somewhat casually expresses a wish to have more of it and gets what he wished for.

One of the more interesting stories in the collection, by my reckoning. It deals with a creature out of Scottish legends and another better known supernatural entity who end up wreaking considerable havoc on a Scottish village.

“Lord Dunwilliam and the Cwn Annwn”

The other standout, this one finds an arrogant lord lost in a blizzard and coming upon the hut of a peasant and his lovely and mysterious daughter. All is not quite what it seems, and it doesn’t go so well for the lord… and that’s about all I’ll say about this one. Except that it’s worth a read.

“The Monster”
Hit and miss with this one. It gets off to an ordinary start with a young girl being harried by her fanatically religious guardians and then takes a turn into territory that felt a little like The Wicker Man. Unfortunately The Twilight Zone twist ending knocked things back down a few notches.

“Under the Skin”
“The Echo”
“The Colored Transmission”
“Housebound”

William I. Lengeman III’s last review for us was The Human Zero. He holds forth at www.wileng3.com.

Interesting – I remember Chetwynd-Hayes principally as an anthologist. He edited the Fontana series of ghost stories and the Armada ‘Monster’ series.

There were two Amicus anthology movies based on his work, FROM BEYOND THE GRAVE and THE MONSTER CLUB. The studio’s style was pretty much sputtering out at that point, but a creepy episode or two was still to be had.