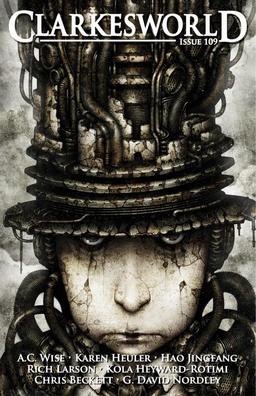 Did you know that there are only three genre fiction magazines that completely support themselves from the revenue they generate? These are Analog, Asimov’s, and the Magazine of Fantasy & Science Fiction, collectively known as the Big Three. Others, like Tor.com and Subterranean (now closed), are supported by the revenue of their parent companies. Below them are four more groups: the non-profits (like Strange Horizons and Beneath Ceaseless Skies); the hobbyists or beginners (typically characterized by low or no pay for authors); the aspirants (they pay authors SFWA-qualifying rates or better, but haven’t found reliable way to cover that cost); and the conceivable (the aspirants that have learned to generate enough revenue to cover costs, but not adequately compensate their staff)…

Lately, I’ve started seeing projects to resurrect dead magazines or save those that couldn’t get enough subscribers to sustain their ambitious goals. It’s uplifting to see our community rallying around these causes, but are we setting ourselves up for a fall in the process? Are we simply delaying the inevitable, like what happened with Realms of Fantasy? (For those who don’t know, Realms of Fantasy was a print magazine that kept coming back from the dead because there were people passionate enough about it to want to see it continue, but not enough to make it a viable business.)

When people debate the future of short fiction magazines in our industry, it tends to turn grim pretty quickly, and Neil’s article is no exception. Still, it’s impossible to argue with his final reasoning: if you care about the future of short fiction — and you definitely should — the most important thing you can do is try new magazines, find a few you enjoy, and support them.

In his most recent Short Speculative Fiction Review Column here at Black Gate, Learned Foote called out Hao Jingfang’s tale in this issue for special attention.

In this month’s Clarkesworld, I very much enjoyed the short story “Summer at Grandma’s House” by Hao Jingfang, originally published in 2007, and translated into English by Carmen Yiling Yan. You can read it for free right now at Clarkesworld.

Briefly, what it’s about: a young man drifting aimlessly through life who visits his grandmother for the summer. This place is not what you’d expect: “The coffeepot is a penholder, the penholder is a lighter, the lighter is a flashlight, the flashlight is a jam container.” The story has to do with what he learns about the meaning of life in this house… I’m particularly moved by this story because it’s about destiny and the meaning of life in the most un-melodramatic way imaginable. It has something to say, a message if you like, but it goes about its didactic task with warm characterization and — most crucially — it’s a story that makes sense.

The main character’s aimless, and his aimlessness concerns everybody, including him. When he goes to live with his grandmother, his mother encourages him, but with implicit criticism in her words: “Find someplace to fix up your spirits… and come back ready for another go.” The mother’s message is clear: There’s something wrong with you, kid.

However, Grandma makes an art out of aimlessness. She’s a brilliant inventor who works with reverse transcription enzymes. As a scientist, she “rejects any form of teleology,” such that “eyes grew eyelashes to keep dust out.” We come from a long line of pointless mutations — so why ask what our destiny in life is? Or why not ask?

It’s an age-old theme of science fiction to deal with our place in a big, scary, meaningless cosmos. This story fits firmly in the genre, not so much for the ways it pushes the boundary of science (though Grandma is an innovator), but for the questions it asks about how we live our lives in the universe that science reveals.

We last covered Clarkesworld with Issue 108.

As I’ve commented before on Black Gate. I’m a fan of short stories. I like that they don’t have the bloat of novels especially trilogies or series. I can also read the entire story in one sitting.

I have recently supported SFF magazines that provide short fiction. I’ve bought every issue of Grimdark (an e-magazine), issue #31 of the recently restarted Weirdbook, and Scrolls of Legendry #1.

I think it’s ironic that the future of short fiction in SFF looks so grim given its past with magazines like Weird Stories and writers like Robert E. Howard.

> I have recently supported SFF magazines that provide short fiction. I’ve bought every issue of Grimdark (an e-magazine),
> issue #31 of the recently restarted Weirdbook, and Scrolls of Legendry #1.

Very glad to hear that, NOLAbert.

Which one would you recommend for someone who wanted to try a new fantasy magazine?

Well, I’ve only read the first story and poem in Weirdbook #31. So, it’s hard to recommend without a more complete read. I will say that I really liked John Fultz’s story “Chivaine,” a great mythic story. That first poem didn’t grab me, but I like the idea of a fantasy magazine that includes poetry (and artwork).

I really enjoyed Scrolls of Legendry #1, but will acknowledged it has a particularly narrow focus. Recommending it, which I do, depends on whether the reader would be interested in the focus. The zine is half reviews of either older sword and sorcery books or new adaptations based on older sword and sorcery tales. The rest of the zine is a short story by Jeff Black called “The Heaviest Sword.” The story was great as was the cover art. I also really like that the format is a print zine. Look forward to the next one.

Grimdark is an emagazine that is just over a year old with 5 issues now. Issue 1 had two great short stories by Mark Lawrence (Bad Seed) and Mike Gelprin (The Neutral). Issue 2 didn’t have a stand out story or article for me. I thought Aaron Fox-Lerner’s “Drone Strikes for Fun and Profit” had a great premise, but I didn’t really find the conclusion to the story to my liking. The R. Scott Baker story (two-part with the second part in issue #3) was unimpressive to me. I know he is highly regarded, so maybe it wasn’t the best introduction for me to the Second Apocalypse world. Issue #3 had the great short story “The King Beneath the Waves” by Peter Fugazzotto. I enjoyed this story so much that I contacted Peter to let him know and got a free enovella in return (available to anyone who subscribes to his email list).

Although I’ve liked the interviews in Grimdark to some extent, mostly the nonfiction hasn’t been anything too impressive. I just started issue #4 and I did see that John Fultz has a nonfiction article that I have high hopes for.

So, in a nutshell if the focus of Scrolls of Legendry appeals to you, then you can’t go wrong. And Grimdark has had some exceptional short fiction, so I think it’s worth it too. I have high expectations for Weirdbook #31, Fultz’s story meets that expectation, but I haven’t read enough of it to recommend it yet.

I’m not sure where Heroic Fantasy Quarterly fits into Clarke’s hierarchy of short fiction magazines. Truth is that while we make a little money from advertising, it is a very little money indeed.

When we set up the magazine we spent quite a bit of thought on this and ended up deciding that our lives were a lot easier if we just made up any shortfalls out of our own pockets. Thus we are not constantly hustling for funds and constantly pestering people for their change and whatnot. Plus, we view HFQ as a hobby– a hobby we are happy to invest in.

We did provide paypal buttons to our authors for about two years, but as far as I know it didn’t generate much of anything for them.