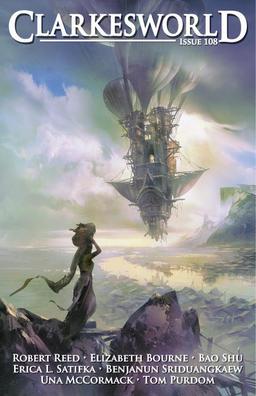 Neil Clarke’s editorial in the latest issue of Clarkesworld is entitled “The Sad Truth About Short Fiction Reviews.”

The sad truth about short fiction reviews is that the overwhelming majority of them have little-to-no impact on readership. After monitoring the incoming traffic for the online version of this magazine for nine years, I can say that the typical review has a statistically insignificant impact on the readership of a story or issue. The only notable exception to this has been reviews on high traffic sites, like io9 or Tor.com, that focus specifically on a single story. As the number of stories in a review increases, there’s a dramatic drop-off in story readership… Shouldn’t reviews of good stories have the effect of encouraging people to read the story?

In a discussion on his editorial here at Black Gate, Neil elaborated on his thoughts:

A review that doesn’t send new readers is functionally equivalent to emailing your thoughts to the author. Nothing wrong with that, but there are reviews that send the author a message and readers to the story. I’m saying that the we should all aspire to the former and that most reviewers aren’t. That’s the sad truth I was referring to in the title.

“The Next Generation of DNA Sequencing” by Dan Koboldt
“Traitors and Tough Decisions: A Conversation with Seth Dickinson” by Chris Urie
“Another Word: On Sunshine and Shadows” by Jason Heller
“Editor’s Desk: The Sad Truth About Short Fiction Reviews” by Neil Clarke

We last covered Clarkesworld with Issue 107.

I remember one commenter castigating Puppies for pushing stories from racists and homophobes ( meaning he did not mention the quality of stories, just presumed opinions about authors ). I challenge him to writew a comment that likevise now coindemn Clakesworld.

Meanwhile Jay Maynard keeps getting flack and insults for his award proposal. World we live in.

Yeah, that is Requires Hate.

I had a chuckle a few months back when I first saw some of the loudest “anti-bullies and bigots” publish her. Just proved to me how big of hypocrites they actually are.

At Clarkesworld, we consider the story for publication, not the author. Some people have trouble separating the two. Publishing someone’s work is not an endorsement of everything they do, just that story. The only place the author’s personality comes into play is whether or not they can behave professionally in our dealings with them. The overwhelming majority can.

We have taken criticism for this approach, but plan to stick with it.

I’ll take you at your word Mr Clarke, and I would like to make it clear, I wasnt referring to you or your publication, but to another.

The “we look to the story, not the author” practice doesnt get much traction in the world of sf&F literati…I bet you would be burned in effigy if you were to publish a Vox Day story.

It isn’t hard to connect the dots and figure out who you are talking about. That publisher also publishes a prominent puppy some of their employees disagree with on various issues. As a company, that’s behavior that lines up with my statement. It’s not as unique as you might think.

The world of SF&F literati is a lot bigger than those who scream the loudest (on any side).

Mr Clarke, the world of SF and F literati – why nobody mentiones Horror? What kind of separatism is that ? – does not, sadly, appear to have much to do with SF or F or H nowdays. Everything is about politics, politics, politics.

This month I read a contents of a magazine similar to yours which contained a article about toxic ness of masculinity or somesuch. So, pardom me, as I do not saee how atext like that has a place in SF, F and H magazine.

Anyways, you have the right to publish whomever you wish. I have the right not to read whatever I do not want to read or support. I applaud your stance. Can you perhaps point to some prominent puppy – of either emotion – that you have published?

I was actually talking about – and to repeat, with all gramaticall and spelling errors – I remember one commenter castigating Puppies for pushing stories from racists and homophobes ( meaning he did not mention the quality of stories, just presumed opinions about authors ). I challenge him to writew a comment that likevise now coindemn Clakesworld.

My experience with the horror community is limited to the overlap it has with the SF/F community. I won’t pretend I know what’s happening with them.

Again, as I said, if you only listen to the loudest voices on any side you’d get the wrong impression. Likewise, one story or article shouldn’t paint an entire publisher or publication as only being a certain way. I can counter your “one commenter” with a disgruntled subscriber who emailed me to say they were dropping their subscription because we published someone they felt they couldn’t support. It can be distressing to see these things, but it doesn’t necessarily represent the entire community.

I don’t keep track of who is or isn’t a puppy. Life’s way too short for that. Sure, it’s hard to miss who their leaders are, but beyond that, I can’t be bothered. Those labels aren’t helping anyone. I know we haven’t published any of their leaders, but then, they aren’t submitting stories to us either. They are just as welcome as anyone else.