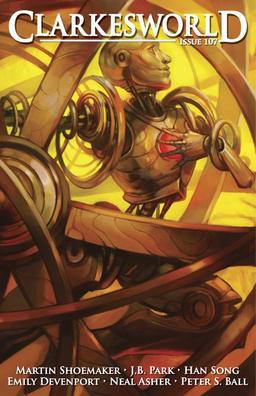 Mark Cole’s article in the latest issue of Clarkesworld is on a topic near and dear to us old-time SF fans: the influence (for good and ill) of the legendary John W. Campbell.

In September of 1959, Jason Howley walked into the Golden Casino in Reno, Nevada, carrying a small, black, plastic box. Within a matter of minutes, he’d won over three hundred thousand dollars. When the device was opened up by investigators, they found nothing in it but a plastic lens, two silver contacts, white paint, and a series of diagrams drawn in black ink.

Regular readers of Astounding Science Fiction recognized it immediately when they read “David Gordon” (Randall Garrett)’s story, “…Or Your Money Back” : it was a version of the Hieronymus Machine, a “psionic amplifier” promoted by Astounding’s editor, John W. Campbell…

One thing more than anything else ushered psychic powers into the mainstream of SF: the influence of one of the genre’s greatest editors, in the pages of one of the most distinguished SF magazines of the Golden Age.

The influence of John W. Campbell and his work in Astounding.

Read Cole’s article “Fans Are Slans”: A Study in Campbellian Influence for the complete story.

We last covered Clarkesworld with Issue 106.

This issue’s cover, “Descendant,” is by Julie Dillon.

Our mid-August Fantasy Magazine Rack is here. See all of our recent fantasy magazine coverage here.