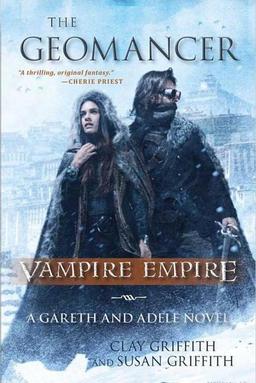 Clay and Susan Griffith are the authors of The Vampire Empire trilogy from Pyr, set in an alternate future in which a horrible plague of vampires swept first over the northern regions of the world in 1870, and the popular Crown & Key trilogy from Del Rey. Now they’ve launched a brand new urban fantasy series set in the Vampire Empire universe, featuring the vampiric couple Gareth and Adele.

The uneasy stalemate between vampires and humans is over. Adele and Gareth are bringing order to a free Britain, but bloody murders in London raise the specter that Adele’s geomancy is failing and the vampires might return. A new power could tilt the balance back to the vampire clans. A deranged human called the Witchfinder has surfaced on the Continent, serving new vampire lords. This geomancer has found a way to make vampires immune to geomancy and intends to give his masters the ability to kill humans on a massive scale.

The apocalyptic event in Edinburgh weakened Adele’s geomantic abilities. If the Witchfinder can use geomancy against humanity, she may not have the power to stop him. If she can’t, there is nowhere beyond his reach and no one he cannot kill.

From a Britain struggling to rebuild to the vampire capital of Paris, from the heart of the Equatorian Empire to a vampire monastery in far-away Tibet, old friends and past enemies return. Unexpected allies and terrible new villains arise. Adele and Gareth fight side-by-side as always, but they can never be the same if they hope to survive.

The Geomancer: Vampire Empire will be published by Pyr on November 3, 2015. It is 319 pages, priced at $17 in trade paperback and $11.99 for the digital version. The cover is by Chris McGrath.