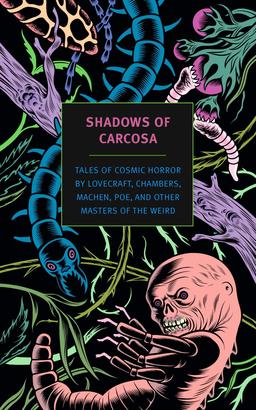 I think there’s something about October that drives publishers to repackage classic horror tales for a new generation.

Earlier this week we looked at Leslie S. Klinger’s new anthology In the Shadow of Edgar Allan Poe, which collects tales published between 1816-1914; today it’s D. Thin’s handsome new book from New York Review Book Classics, Shadows of Carcosa: Tales of Cosmic Horror by Lovecraft, Chambers, Machen, Poe, and Other Masters of the Weird, published on October 6th. It collects tales from roughly the same era, 1833-1927, all with the theme of the cosmically weird.

“The true weird tale has something more than a secret murder, bloody bones, or a sheeted form clanking chains. An atmosphere of breathless and unexplainable dread of outer, unknown forces must be present; a hint of that most terrible conception of the human brain — a malign and particular suspension or defeat of those fixed laws of Nature which are our only safeguard against the assaults of chaos and the daemons of unplumbed space.” —H. P. Lovecraft

This collection features some of the greatest masters of extreme terror, among them Edgar Allan Poe, Ambrose Bierce, Bram Stoker, and Henry James, and includes such classic works as Arthur Machen’s “The White People,” Algernon Blackwood’s “The Willows,” and of course Lovecraft’s own weird and hideous “The Colour Out of Space.”

Shadows of Carcosa: Tales of Cosmic Horror by Lovecraft, Chambers, Machen, Poe, and Other Masters of the Weird was published by New York Review Book Classics on October 6, 2015. It is 368 pages, priced at $15.95 in trade paperback and $7.99 for the digital edition. The cover is uncredited, but it sure looks like Charles Burns to me.

I agree, it looks like Charles Burns as the cover artist.

“I think there’s something about October that drives publishers to repackage classic horror tales for a new generation.”

And those horror works that are out of copyright!

Ain’t that the truth!

Cntrl+C, Cntrl+V, email to printer in Cathay! Hmm, I ought to check out some of these things to see if they have any of the typo mistakes and disclaimer text you can find from the gutenburg/wikileaks…?

BTW – John, here’s a link, more progress on the Buck Rogers CopyWRONG issue http://www.geek.com/news/new-buck-rogers-movie-happening-if-a-court-decides-the-name-is-public-domain-1638019/ Really be a good discussion here given the Solar Pons/Sherlock Holmes issue and my comments on the Conan stuff! Hope this isn’t spamming you but since you have all urls on a delay approve you can wipe it if you want – but if they topple it in court, paves way for a Conan non-REH approved project and other stuff, no? Be nice to have modern writers do the pulp stuff they loved as kids before the pulps become more dated than the “Penny Dreadfuls”?