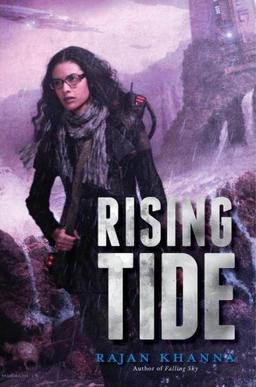 Rajan Khanna’s first novel Falling Sky, the tale of a post-apocalyptic North America filled with zeppelins, a plague-ravaged populace, and a pirate air city, was called “Like Hemingway meets The Walking Dead” by Tad Williams. Me, I didn’t need to wait for the reviews — I was sold at “pirate air city.”

The sequel, Rising Tide, arrives in two weeks, and it continues the tale of Ben Gold and Miranda, who has developed a test for the zombie virus… but when an old enemy attacks, there may not be time to perfect it.

Ben Gold sacrificed his ship in an effort to prevent pirates from attacking the hidden city of Tamoanchan. Now Malik, an old friend turned enemy, has captured Ben and Miranda — the scientist Ben loves. With Miranda held hostage, Ben has to do Malik’s dirty work.

Miranda has plans of her own, though. She has developed a test for the virus that turned most of the population into little more than beasts called Ferals two generations ago. She needs Ben’s help to rescue a group of her colleagues to perfect the test — but first they must rescue themselves.

When a terrible new disease starts spreading across Tamoanchan and people start dying, it seems there’s something more sinister afoot. Then an old enemy attacks. Can Ben fight off the invaders? And will it be in time to save anyone from the disease?

Rising Tide will be published by Pyr on October 6, 2015. It is 267 pages, priced at $17 in trade paperback and $11.99 for the digital edition. The cover is by Chris McGrath. Learn more at Rajan Khanna’s website here.