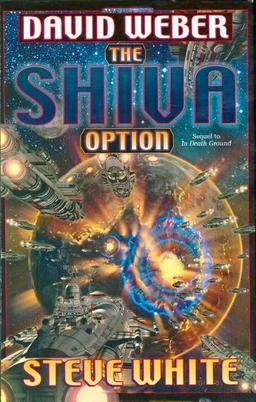 Task Force Games, based in Amarillo, Texas, was one of the very best board game companies in the business in the 80s, especially for science fiction fans. They published the majestic Federation & Empire (and its follow-up, Federation Commander), Kings Bounty, Godsfire, Battlewagon, Armor at Kursk, Musketeers, and the RPGs Crime Fighter, Prime Directive (based on Star Trek), and the glorious Heroes of Olympus — among many, many others — before the company was sold to Might & Magic developer New World Computing in 1988, and then went out of business.

Of course, who could afford big games like that? Not me, that’s for sure. But that’s okay, because Task Force Games was also a pioneer in the microgame market, with a line of truly stellar Pocket Games, starting with Starfire in 1979. Starfire was one of the most successful microgames ever released. It sold a zillion copies, went through six different editions, and is still being sold today by Starfire Design Studio. It was so popular it eventually inspired a series of novels by David Weber and Steve White, including the New York Times bestseller The Shiva Option.

Anyway, Task Force Games had a huge hit with their Pocket games line. Shipped in zip locks bags (eventually shrinkwrap), and priced at $3.95, the games were designed to be easy to learn and quick to play. All told they released twenty-two, all but three with science fiction or fantasy themes, including many that are still highly regarded today. The most successful, like Starfire, Star Fleet Battles, Armor at Kursk, and Swordquest, eventually graduated to  full-fledged boxed editions, but the zip-lock versions were fully playable (and a lot more portable).

The first three Pocket games to be released were Starfire, Asteroid Zero-Four, and Valkenburg Castle (which, unlike the first two, wasn’t numbered). Here’s a scan of the backs of all three: 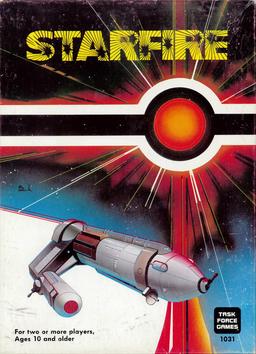 Apologies for the plastic distorting the image a little on Valkenburg Castle. My copies have all been in the shrinkwrap for over 30 years, and I’m not taking them out now.

Task Force Games is generally acknowledged as the second major player to jump into the microgame industry, following Metagaming, who released Ogre in in 1977. They were followed by SPI, TSR, Steve Jackson Games, and FASA, before microgames eventually died out at the end of the 80s. There’s a nice survey of the entire microgame genre at The Maverick’s Classic Microgames Museum here.

One of the great things about Task Force’s pocket games was that they were sort of a testing room for innovative game designs. Designers could try out all kinds of things, without the heavier pressures that came with a $20 boxed game. When these simple games were a hit, as they were with Starfire and Star Fleet Battles, the designers expanded the rules with sequels — also pocket games, naturally. Starfire had two Pocket Games sequels before being released as a boxed game.

The boxed version, containing the original and both expansion, was released in 1984 (at right).

The second Task Force Pocket Game, Asteroid Zero-Four, was also released in 1979. Unlike Starfire, it’s generally forgotten today, but it was a fun little two-player game that extrapolated the Cold War into space, simulating a battle between Russian and American asteroid bases.

Much more memorable is Valkenburg Castle (1980), a surprisingly faithful board game adaption of a traditional dungeon crawl. Players take the role of young Lord Hobart van Valkenburg, rightful heir of the abandoned Valkenburg Castle, returning at last to his monster-infested ancestral home in an attempt to wrest it away from the sinister creatures who now inhabit it — including the powerful boss monsters who lair at the deepest dungeons levels. Valkenburg Castle never had an upscale boxed edition, which I think is a shame.

Here’s a few pics to show you all the goodies you got for $3.95, starting with Starfire, which came with a counter sheet and a rather boring hex map: 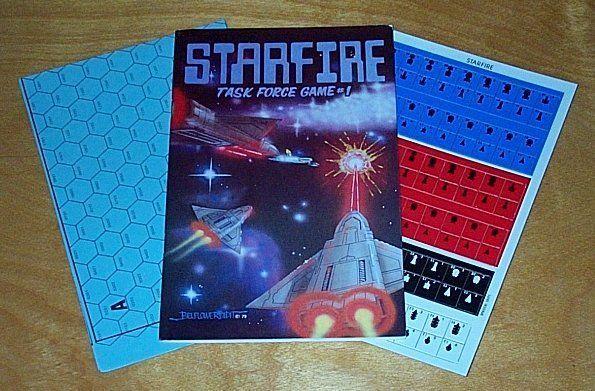 Here’s one segment of the much more interesting asteroid map for Asteroid Zero-Four: 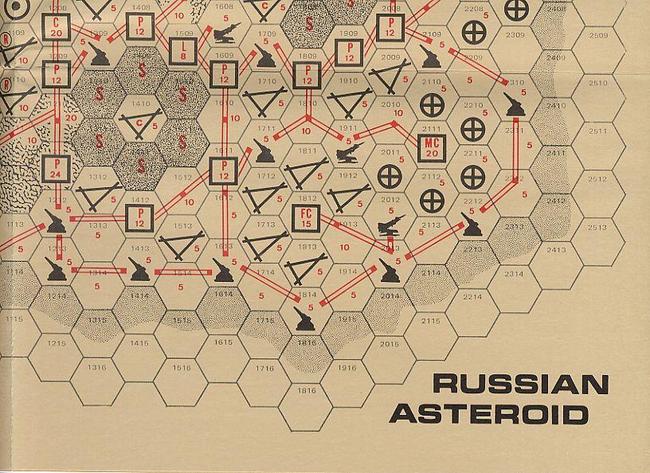 And here’s everything that came with your copy of Valkenburg Castle, including a flyer advertising more from Task Force Games: 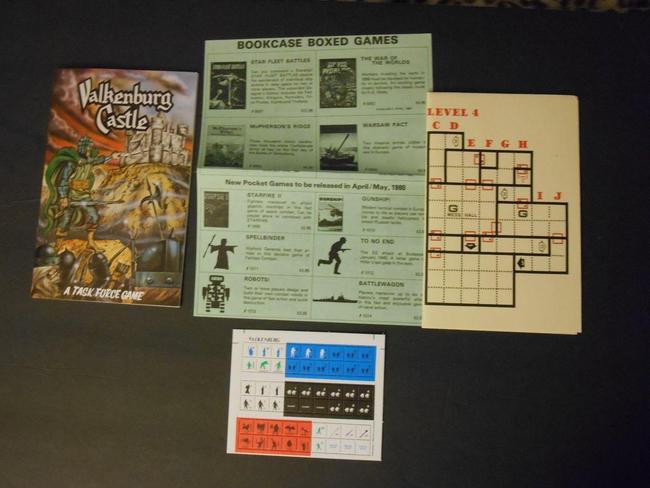 A closer look at the counter sheet: 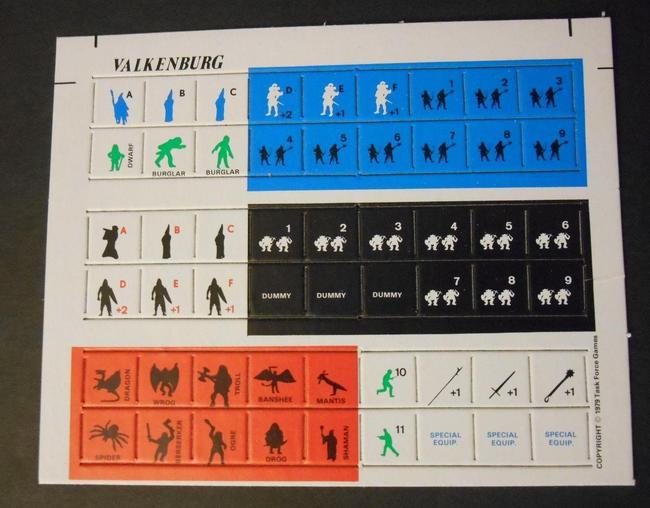 And a glimpse of half of the map: 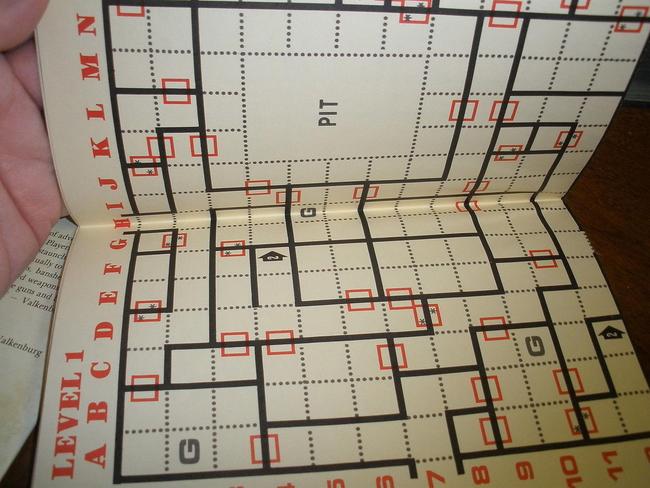 We’ll continue our tour of Task Force Pocket games next time with a look at Cerberus: The Proxima Centauri Campaign, Star Fleet Battles, and Prochorovka: Armor at Kursk.

See the complete catalog of Task Force Pocket Games over at GameBoardGeek.

I had a bunch of these. Few were great, but all were good solid games and good value. Starfire, thought, was (and is great). I haven’t played in ages but I do look at the page for the current version of the game. http://www.starfiredesign.com/starfire/

Fletcher, wasn’t there an attempt to computerize Starfire at some point? Or perhaps make it playable over the internet?

I liked Starfire more than Star Fleet Battles, mainly from the custom-building of ships aspect. Nice to know that it is still available, even digitally.

Amarillo Design Bureau, Steve Cole’s new company, is also keeping a number of the old Task Force microgames afloat, some with the aid of SJG’s Warehouse 23 outlet. So, Asteroid Zero-Four (which I swear must be related to the movie Moon Zero Two), Valkenburg Castle, Prochorovka: Armor at Kursk, and a few others are digitally available, too.

John – I think there was but I’m can’t remember if anything came of it. That could have been a blast.

Right you are! I had a look, and found a link for the PDF version of VALKENBURG CASTLE:

Here’s the page that collects the six currently available electronic editions (you have to scroll all the way down to the bottom), under OTHER GAMES:

> John – I think there was but I’m can’t remember if anything came of it. That could have been a blast.

It’s a little dated now, but this page:

11/23/2002 – Its been a while so I better add some updates on Starfire:
Starfire Design Bureau and Digital Gamers plan to release Starfire Online consisting of 4 new online products for the Starfire system starting in mid 2003.
Starfire Tactical Combat – An online version of the Tactical game, Space Master Aid – Generate star systems and all the other functions of running a campaign, Premium Space Mastered Campaign –
Play the full Starfire system in a private campaign of up to ten players, and Starfire RTS – Experience the challenges and rewards of running an interstellar empire in real-time in a shared, persistent universe with thousands of other players.
ELITE, the Galactic Starfire expansion is almost done, just a bit of rewriting left and it will be available as a purchased PDF. ELITE takes the Science Levels out to SL-25, adds some new optional tech, and re-writes some GSF rules for clarity.

However, the link they give is dead.