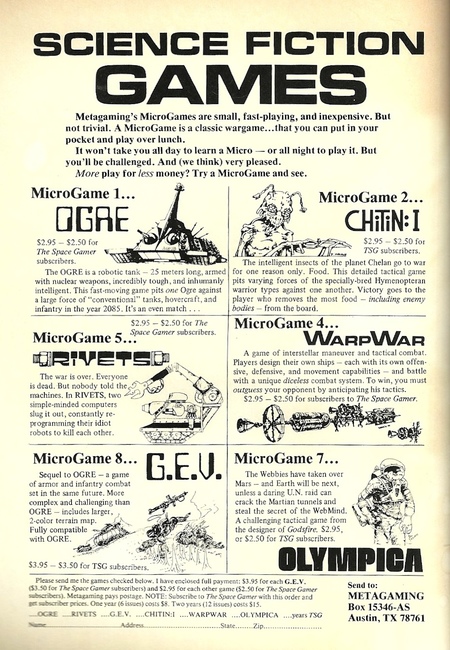 I’ve been writing a lot about board gaming recently. It’s been a big part of my life ever since the late 70s, when I responded to an ad for a line of new “microgames” from a company called Metagaming.

I saw the above ad on the inside cover of Analog magazine, which I started reading with the April 1997 issue, when I was 12 years old. Responding to ads in comics and magazines was something you did in the 70s; don’t look at me like that. Honestly, it was perfectly normal. You mailed a check to some address in Texas, and four weeks later a tiny package arrived in the mail containing X-ray glasses, sea monkeys, or a Polaris Nuclear Submarine. Seriously, the US Postal Service and your mother’s checkbook were all you needed to access all the wonders of the world in the 1970s.

Well, the wonder that attracted my attention in the Fall of 1978 was an advertisement for SCIENCE FICTION GAMES from a company called Metagaming (click on the image above, from the inside cover of the October 1978 Analog, for a high-res version). I’d already taken my first steps into the hobby games market with the classic wargames of Avalon Hill, including Panzer Leader and Starship Troopers. But they were massive, requiring half an hour or more of set-up, and four to six hours to play. These mini-games looked portable and promised to be “fast-playing and inexpensive… a classic wargame that you can put in your pocket and play over lunch.” 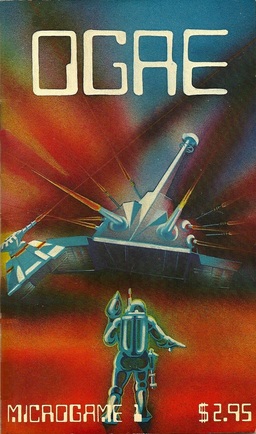 My friends and I played chess over lunch at school. But the thought of being able to play something more interesting fired my imagination.

In fact, Metagaming ads fired my imagination, period. They had games about desperate battles against robotic tanks, warring insect races, post-apocalyptic battles between robot armies, interstellar wars, and more. All for just $2.95 each (and Metagaming paid the shipping!)

It was all too much to resist. I saved up my babysitting money, gave my mom $2.95, and she wrote out the check for me. I think the first games I bought were Melee and Wizard, two brilliantly compact proto-role playing games designed by Steve Jackson. My friends and I played those games to death every chance we got — at lunch, after school, even during breaks.

The next one I ordered was Ogre, another Steve Jackson design, and the very first Microgame. Melee and Wizard were popular enough in their own right, but it was Ogre that really launched the mircogame phenomenon. As our Monday blogger Bob Byrne noted in his recent review of Steve Jackson’s Munchkin:

Those of us old enough to remember micro games recognize the name Steve Jackson as the creator of Ogre. This tiny little “board game” with the flimsy cardboard pieces launched the micro game market.

Indeed it did. Metagaming eventually published 22 microgames, covering a wide range of genres, before going out of business in 1983. Games like Chitin, WarpWar, G.E.V, Lords of Underearth, and Rommel’s Panzers.

They were also instrumental in helping kick off the solitaire RPG trend in the late 70s, with such classic solitaire (or “pre-programmed”) games as Death Test, Death Test 2, Grail Quest, Treasure of the Silver Dragon, and many others. Read Howard Andrew Jones’s fine 2011 survey of solitaire mini-games here.

Metagaming didn’t survive long, unfortunately, but they had a huge impact on the industry. Well before they went out of business, competition sprung up from most of the major games companies as microgames became a whole new branch of gaming. Companies that quickly jumped on the bandwagon included SPI (with Demons, DeathMaze, and the classic The Creature that Ate Sheboygan), Task Force Games (Starfire, Swordquest, and the top-selling Star Fleet Battles), Steve Jackson Games (whose hits included Car Wars, Necromancer, and Illuminati), and the marvelous Heritage Games, with the supreme achievement of Western Civilization, Barbarian Prince.

FASA also dipped a toe in the water, publishing half a dozen Star Trek-themed microgames. Even the mighty TSR got into the act, experimenting with microgames with such titles as Vampyre, They Invaded Pleasantville, and Saga. 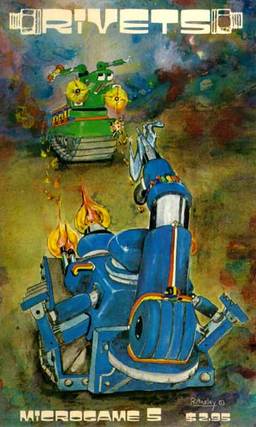 Metagaming may have been dead by 1983, but their legacy lived on in a very real way. Their most talented designer, Steve Jackson, struck out on his own in 1980, founding Steve Jackson Games and eventually taking two of his most popular titles, Ogre and G.E.V., with him.

One of Metagaming’s early marketing ideas was reduced prices for subscribers of their house organ, The Space Gamer magazine. It certainly worked on me, and I subscribed early. The Space Gamer was the essential publication for fans of science fiction gaming, and microgames in particular, and — next to Dragon magazine — was the most widely admired publication in the industry. When he left Metagaming in 1980, Steve Jackson acquired the magazine, and kept it going for another five years.

The economics of game publishing gradually changed over the next ten years, and by the early 90s, microgaming was effectively dead. So were virtually all of the companies who had fueled the boom, including SPI, Task Force Games, Heritage, FASA, and, of course, Metagaming. TSR, near bankruptcy itself, was acquired by Wizards of the Coast in 1997. Only Steve Jackson Games has survived, and it hasn’t published a true microgame in many years.

Recently, microgames have become highly collectible — especially the early editions of those games which survived in new or expanded forms, like Ogre (resurrected with a nearly million-dollar Kickstarter campaign in a massive 14-pound Designer’s Edition in 2012) and Melee and Wizard and their solitaire sequels, which were gradually morphed into The Fantasy Trip, a full-fledged RPG.

Ten years ago, as I was browsing eBay for copies of The Fantasy Trip games I could possibly afford, I stumbled on a company doing brand new pre-programmed adventures: Dark City Games, run by George Dew. George has been keeping the flame of solitaire mini-games alive for over a decade, with a fine line of innovative and brilliantly designed solo SF and fantasy titles in the spirit of Death Test. If you’re at all interested in solitaire fantasy games, I highly recommend Dark City.

Over the next few weeks, I hope to look at some of the favorite mircogames from my youth, especially releases from Metagaming, Task Force, Heritage, and SPI.

There are several sites out there devoted to microgames, including places where you can download complete PDF copies (like the Heritage Dwarfstar site). One of the best sites is the Classic Microgames Museum, which I highly recommend.

OGRE was such a favorite of mine.

Played lots of Rivets, Warp War, Ogre and GEV back in the early eighties. Later played several of the TSR mini-games as well. Good beer & pretzels games (does anyone say that anymore?).

It’s a sterling example of beautifully simple game design, no question. There are precious few games that have survived the test of time the way OGRE has.

I still have my original copy of Chitin. It’s time for another play!

The weird thing is that my local Half Price Book has gotten several copies of 3 different Metagaming micro games in. And they are unpunched prints from the 80s I picked up three different wargame ones.

Though I’ve lost or given away my other micro games over the years, I’ve still got a copy of “Revolt on Antares.” And the pieces haven’t even been punched out, to boot.

I’m sitting at my desk, staring at my original copy of Melee, and wondering if there isn’t a niche market for “pocket” games like this anymore…?

I wonder if to some extent they’ve been supplanted by card games these days?

I had a copy of Warp War many years ago; long since gone. I remember being in the hobby shop (a larger store probably in the Bay Area when I was visiting my grandparents) and having to choose just the _one_ game I could buy. Agony.

[…] and imaginative science fiction wargame Chitin I: The Harvest Wars.  I ordered it after seeing the advertisement in Analog magazine in 1978. The brief text of the ad […]