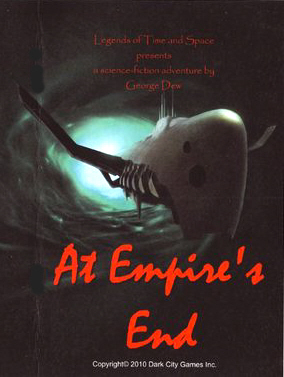 Back in January Dark City Games announced the release of their latest solitaire fantasy adventure, Emerald Twilight, by Bret Winters. I seized the opportunity to order the handful of Dark City titles I didn’t have, including Oasis and At Empire’s End, both by George Dew.

They’ve all proved worth the money, but the one that has captured my imagination immediately is the science fiction adventure At Empire’s End. Here’s the blurb:

Growing up on the periphery is not easy. It’s a tough life, and to survive, you have to know how to deal with ruffians, swindlers and thieves. For excitement, and to pay the rent, you make your living as a bounty-hunter. The risks are great, but the payoff can be tremendous.

Your quarry this time is a dangerous pirate, armed and ruthless. Initially, his ventures were an irritation to the locals. But as his greed and daring grew, he garnered the watchful eye of the meagerly-equipped local authorities. Your mission, should you choose to accept, is to capture “The Duke” and bring him to justice. But you must hurry. The provisional government is weak, and with each of “The Duke’s” raids, society falls further into chaos.

You must find “The Duke” and neutralize him before it is too late.

At Empire’s End includes complete self-contained rules for solitaire play (the “Legends of Time and Space” rules), counters, a beautiful color map, and 302 programmed paragraphs. It is also fully suitable for one to four players, and can be run with a game master.

To promote the game Dark City Games created S.O.S, a short solitaire SF role-playing game, which we reprinted in its entirety here on the Black Gate blog in 2010. Check it out.

You can learn more about some of their earlier games on our summary page, and on this page of collected reviews. Or you can order At Empire’s End for $12.95 directly from Dark City.