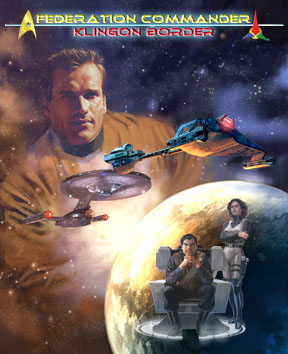 In honor of the US release of Star Trek Into Darkness this week, I found some of my favorite Star Trek games in the basement, and hugged them.

Took longer than you might expect. Turns out there are a lot of decent Star Trek titles. Over a dozen board games, for example — starting with West End’s terrific 1985 contributions, the paragraph-based Star Trek The Adventure Game and the more family-friendly The Enterprise Encounter, all the way up to Wizkids’ 2011 deluxe releases, Reiner Knizia’s solitaire/cooperative mission game Star Trek Expeditions and the strategic space exploration/ship-to-ship combat title Star Trek – Fleet Captains. Not to mention last year’s oddball Star Trek Catan from Mayfair Games.

Let’s not neglect the role playing games, starting with FASA’s classic 1983 Star Trek The Role Playing Game and the updated RPG from Last Unicorn Games in 1999. And of course, numerous card, deck-building, and collectible games, like Star Trek HeroClix from WizKids.

That’s not including dozens of computer and video games, starting with SSI’s unlicensed Apple II space-combat title The Warp Factor (1982), to the text-based The Promethean Prophecy (Simon & Schuster, 1984) and the classic adventure games from Interplay like Star Trek: 25th Anniversary (1992) and Judgment Rites (1993). I could go on, but my fingers are tired already.

But the great-granddaddy of Star Trek games has to be Star Fleet Battles, which began as a 1979 pocket game released in a zip-lock bag by Task Force Games and has grown into one of the largest franchises in table-top gaming, with countless expansions and variants from a small handful of publishers over the last three decades.

The title which got the warmest hug during my basement walkabout, and likely the one I’d grab if I were to be marooned on a lonely asteroid with a group of fellow Star Trek gamers, was Federation Commander: Klingon Border, a Star Fleet Battles mega-game which challenges you to take the helm of a Constitution Class Heavy Cruiser and hold the border during a massive Klingon invasion. 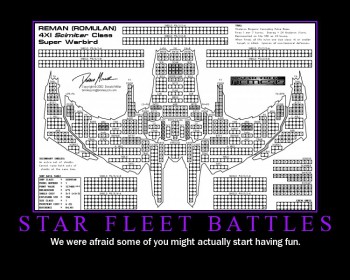 Federation Commander began as a desire to have a more simplified, streamlined version of Star Fleet Battles.

Star Fleet Battles was extremely popular but, man. Was it ever complicated. You could pick up and play the original pocket game in minutes, but after several major expansions and revisions to meet growing player demand for more complexity, it had moved a long way from its fast-action roots.

The typical ship template at right, for a Romulan Bird of Prey, should give you an idea of how much you had to keep track of during combat (click for a bigger version).

Imagine managing all aspects of the Enterprise — effectively taking on the roles of Kirk, Spock, Uhura, Scotty, Chekov and Sulu — and then doing that for multiple vessels simultaneously, and you’ll understand why Star Fleet Battles quickly became known as a game for grognards only.

Federation Commander is based on Star Fleet Battles, and retains a lot of the rules and game dynamics, but it was designed to be much more accessible — especially for newer gamers, or those who wanted to play a complete game in under an hour.

Gameplay was streamlined by severely reducing record keeping, and the record sheets used to record starship damage were smaller and laminated, to allow use of a dry erase pen (believe me, this helped a lot).

The Impulse system was also reduced and simplified, and a strategic game added that allowed players to simulate fleet engagements.

Federation Commander was developed by Amarillo Design Bureau Inc. It’s essentially a tactical starship combat game designed to represent engagements between factions in the Star Fleet Universe, including the United Federation of Planets and the Klingon Empire.

Because the original license for Star Fleet Battles was based only on the original Star Trek — including the 1966-69 TV series, the animated series, and written contributions prior to 1979 — it does not include any of the motion pictures or subsequent TV series, including Star Trek The Next Generation or any of the recent films.

The Star Fleet Battles universe has built up a substantial fictional canon of its own, including original creations such as the Hydran Kingdom and the Interstellar Concordium, and in effect it diverges from the fictional universe created for the movies and TV series after 1979. 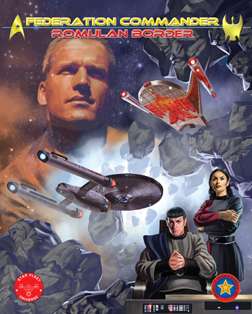 I always admired the vast ambition of Federation Commander. The events and fleet actions chronicled take place around the time of the “General War,” a massive conflict in the Milky Way involving virtually all of the star-faring cultures in the original series, such as the Klingons, Romulans, Gorn, Orion Pirates, and the Tholian, Hydran, and Andromedan empires.

But for me, the game was really about chasing a Gorn battle cruiser across the map at warp 5, shouting “Stand still, you big green lizard!”

While you only saw the Gorn in one episode of the original Star Trek (the classic “Arena”), the Gorn Confederation are a major adversary in the game. They’re also a favorite in the expanded universe, featuring in numerous novels and comics, and they play a major part in the new video game Star Trek.

And if you haven’t seen it already, William Shatner and his Gorn adversary from “Arena” star in a brief rematch in a hilarious promo for the video game.

For serious gamers, there’s also a line of Squadron Boxes, which replace the cardboard counters with a range of miniatures, adding a lot of visual appeal. Everybody loves miniatures, and I guess Star Trek fans are no different.

All very nice, but Klingon Border is already packed full of everything you really need. It’s a complete game with a 60-page rulebook, reference play sheets, a huge assortment of map boards, countless ship cards, and counters which come in two sizes. Most of the counters are for Federation and Klingon units, but it also includes Kzinti, Tholian, Gorn, and other vessels. 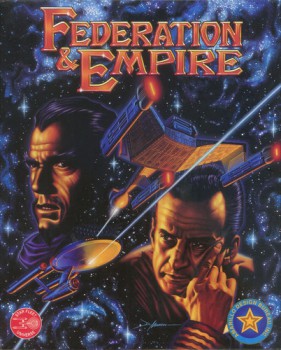 To add to the fun, the vessel from the episode “The Tholian Web,” an Orion pirate raider, a few freighters, base stations, star bases, and an honest-to-god space monster — the feared Planet Killer — are also included.

Federation Commander: Klingon Border was released in 2005. It was designed by Stephen V. Cole and published by Amarillo Design Bureau. It is for 2 − 8 players. It is still in print, with a cover price of $59.95.

I’m a fan of the streamlined rules of Federation Commander — I guess I’m a fan of anything that allows me to quickly saddle up and start firing photon torpedoes at Gorn, really.

But it’s not the only game that I think got the strategic-level engagements right in the Star Trek universe. Any list of the best Star Trek games should also include Federation and Empire, Stephen V. Cole’s ambitious campaign system for Star Fleet Battles.

Federation and Empire is a sprawling empire game, in which players command one or more races, rather than fleets.

The timeline is much longer and players act out extensive campaigns that capture the historical tensions (and massive conflicts) between the Federation and its opponents in the Star Trek universe.

Federation and Empire is the base set for a series of products. There were three expansions: Carrier War, and two modules: Special Operations and Marine Assault.

Federation and Empire was released in 1986, with a deluxe edition in 1990. It was designed by Stephen V. Cole and Amarillo Design Bureau,and published by Task Force Games. It is for 2 − 8 players. It was re-released in 2010 and is still in print, with a cover price of $59.95.

[…] haven’t played the original Druid, but I’m a big fan of West End Games, including their Star Trek titles, Bug-Eyed Monsters, and especially Junta and Eric Goldberg’s masterpiece, Tales of […]