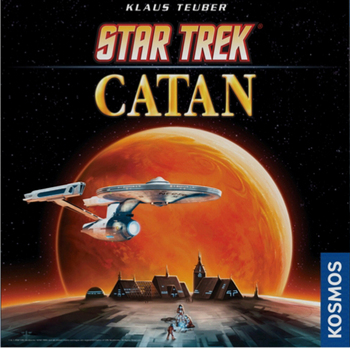 You heard me. Star Trek Catan. The game of building, trading, and… well, I’m not sure exactly. But the moment I saw that cover graphic of the starship Enterprise hovering over a futuristic medieval village (uh, what?), I knew I had to have a copy.

And now I do. I’m still puzzling over it, to be honest. Exactly how the Star Trek license in any way enhances the basic mechanics of a resource-trading colonization game that sold 15 million copies in its original incarnation is still very unclear to me.

But it comes with 60 little model spaceships, including replicas of the Enterprise. 60! In a bunch of different colors. The rules are almost superfluous at this point. I was happy the moment I unpacked the box and started pushing little starships around the board, making warp engine noises.

Here’s the box copy, since you may pay more attention than I did:

SPACE… the Final Frontier. The many resource rich planets within the limits of Federation territory await exploration and settlement. Build outposts and star bases to extract the resources. Using your fleet of starships, establish supply routes that enable you to boldly go further into deep space. Avoid resource shortages by trading with your opponents and Federation neighbors. If your opponents venture too far into your space, though, you might need to divert the Klingons to drive them away. because in the end, only one can be the Federation’s greatest hero. Take up the challenge!

Star Trek Catan transports the timeless game concept of the world’s most acclaimed board game — The Settlers of Catan — into the exciting Star Trek universe. The popular characters of the Starship Enterprise come into play through novel new “support cards.” Build, trade and settle where no one has gone before. Since 1966, millions of Star Trek fans all over the world have watched the adventures of the Starship Enterprise, Captain Kirk and Mr. Spock. And since 1995, millions of enthusiastic players all over the world have played Klaus Teuber’s The Settlers of Catan — a board game classic. It’s time to bring them all together on the Final Frontier.

I suppose at this point I should admit that I’ve never played The Settlers of Catan.

Yes, I know it’s the most popular board game since Monopoly. But my chief interest is in science fiction and fantasy games, and Catan is about trading lumber for sheep. (“Who’s got wood for sheep?” Yeah, I’ve heard all the Catan jokes.)

Near as I can figure out, this version of the game puts a very thin Star Trek veneer on the classic design, and otherwise doesn’t mess with it. Cynically speaking, it’s a just way to wring money out of dumb Star Trek fans.

Like me. The moment I saw the beautiful Catan map with little plastic starships, I desperately wanted it.

Put a game of lumber trading and road-building in outer space, and suddenly I really want to play it. Man, whoever thought up this idea is some kind of genius.

The box comes packed with tons of fabulous toys, including 19 hexagonal planet sector tiles that fit together a zillion different ways, a frame, 60 starships (Did I mention those? 60!), 28 lonely space outposts, 16 “habitat rings” that magically upgrade puny frontier outposts into the heavy-duty starbases from Star Trek 3, a Klingon battle cruiser (yeah!), a bunch of cards representing Kirk, Spock, and other crew members, and over 100 other cards. No idea what they’re for, but the pictures are cool.

Plus a rule book and almanac, neither of which I’ve opened. I’m not done playing with the little plastic starships yet. Zoom, look at them cruise around the board. Warp 7, Scottie! 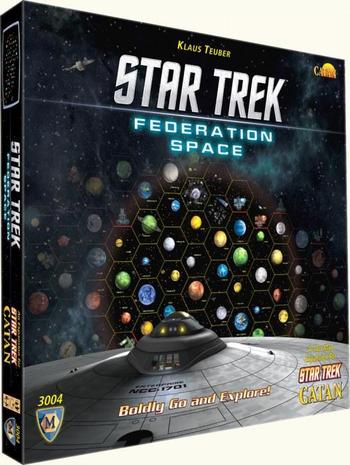 There’s already an add-on to the game, which tells me the designers are serious (that’s the acid test, right?) Star Trek Federation Space adds depth and complexity to the basic game, and allows you to follow in Captain Kirk’s footsteps as he explored the galaxy (just avoid the planet with the flying bats that stick to your back. Brrr, those things always creeped me out).

Truthfully, it was the product description for Federation Space that put me over the edge, and really told me this was a game I had to have.

During its original mission, the Enterprise, Captain Kirk and his intrepid crew visited many strange new worlds and discovered many new life-forms and civilizations. Now you and your friends can Boldly Go and explore this galaxy too. Follow in Kirk’s “footsteps” with this 2 map expansion set. Based entirely on the “Known Galaxy” map seen in Kirk’s ready-room itself, these maps allow you to settle the famous worlds of Federation Space using pieces from your Star Trek Catan base game.

IN THIS EXPANSION YOU GET: 2 full color maps depicting the Known Galaxy known as Federation Space. 4 individual scoring tracks — 1 for each player. 4 sets of scoring markers — 2 for each player. 18 Victory Point tokens — New ways to score. 1 Almanac with 1 page of rules and 20 pages of planet and episode descriptions.

You catch that? This is a copy of the known galaxy map in Kirk’s ready-room. Now you can follow him around the galaxy. Come on, you’ve wanted to do that for 30 years.

(But when you get to Cestus III, don’t beam down for dinner with Commodore Travers. It’s a Gorn trap! Just nuke the site from orbit. You’re welcome.)

I don’t have Federation Space yet. But trust me, it shall soon be mine. In the meantime, I am slowly learning what the basic game is all about. Other than an expensive sandbox that lets you play with 60 starships (and one Klingon battle cruiser) on a star map. Not that that’s not worth the price all by itself, mind you.

As soon as I have a chance to actually play the game, I’ll let you know.

Star Trek Catan was designed by Klaus Teuber (designer of The Settlers of Catan), and developed by Kosmos. The English version was published by Mayfair Games in 2012. It was designed for 3-4 players and has a list price of $54.99.

“But it comes with 60 little model spaceships, including replicas of the Enterprise. 60! In a bunch of different colors. The rules are almost superfluous at this point. I was happy the moment I unpacked the box and started pushing little starships around the board, making warp engine noises.”

Possibly the greatest paragraph in board game review history…

“Star Trek Catan” is actually superior to basic “Settlers of Catan” because of the addition of the “support cards” system. This enables you to call upon Kirk, Spock, McCoy, Sulu, Scott, Uhura, Chekov, Chapel, Rand, or Sarek for help, but only one at a time, and only for a turn or two (so everyone gets a chance for support from the best helpers). The competition for supporters adds a layer of player-to-player interaction absent from the base game, which improves it substantially.

Thanks. I knew that paragraph would connect with true Star Trek fans. We’re the ones who mentally make swish noises whenever an elevator door opens.

Thanks Lawrence! I should have sub-contracted the entire review out to you. I bet you pushed the miniature starships around the board a few times when you unpacked it, too.

Are you the same Lawrence Schick who is Lead Loremaster for Elder Scrolls Online?

I’m not a trekkie so I can’t relate to this, per se.

However, I’m a huge fan of the card game Dominion, which is *supposedly* finished with making additional expansion sets.

I’m waiting for (and dreading) the day when Dominion comes out with a Star Wars or Lord of the Rings expansion set. Or–I hate the very thought–one of those university of X style monopoly versions. There’s something incredibly mercenary about this sort of marketing.

But I’m sure I’ll be a sucker for buying (at least) one of them.

I hear a lot of good things about Dominion, but have never played it. You should do a review for us — I’d love to understand what all the fuss is about.

Sound effects? Real geeks (like me) add their own scoring . . .

I have two versions of RISK, the weird ’80s one where the pieces are plastic roman numerals, and the upscale version with little cannons, calvary figures, and foot soldiers. Exactly same game. Which one do you think I prefer to play?

Not at all a Trekkie, John, gather the tar and feathers. Just thought the writing was superb, a perfect picture painted of a guy transplanted back in time to childhood and enjoyed the transformation immensely. I’d rather have a vivid series of images springing from the written word than grainy, stuttering videocam streams any day. Tip-top stuff…

Do a game review of Dominion?

I’ve never really been into THE VENTURE BROTHERS. But I can see I’m going to have to give it another look.

> Just thought the writing was superb, a perfect picture painted of a guy transplanted back in time to childhood and enjoyed the transformation immensely.

Thanks, Bill. It’s always easy to write when the joy is real.

Thanks, Lawrence. Good to have you with us. And I’m glad to see you’re still writing. I wasn’t aware of the Lawrence Ellsworth connection.

> Do a game review of Dominion?

Think it over, James. You know we need more reviews of great games.

If you want to see Star Trek Catan in action, Wil Wheaton played it on an episode of Tabletop.

(A series I highly, highly recommend to anyone who’s a fan of boardgames. And has enough disposable income to buy all the games they play after watching the episodes …)

Thanks Joe! A few people have recommended Tabletop to me now. And that’s all I need — something new to tempt me to buy board games. 🙂