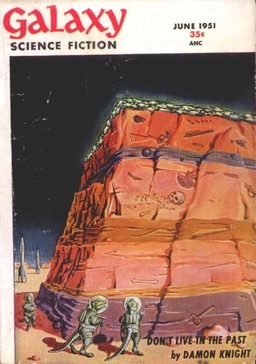 The June, 1951 edition of Galaxy Science Fiction featured several longer works: two novelets and the second part of a serial novel. That only left room for one short story.

In his editorial remarks, H. L. Gold writes of his discovery of science fiction and how his love for it helped him realize what he wanted for a career.

Unfortunately, the dream of editing as good a magazine as possible does not include production difficulties. Because buying paper these days is like being mugged on a dark street, GALAXY has been late much too often… Other headaches are distribution, newsstand display, rocketing costs, ruckuses over ads, sweating good stories into better stories, and improving art, which has been the biggest single gripe of readers.

Regardless of the hassles, Gold found a way to keep the magazine going, and the June issue is another strong showing.

“Hunt the Hunter” by Kris Neville — Ri and Mia act as scouts for humanity’s leader, Extrone, helping him to successfully hunt a farn beast. Extrone is an intimidating figure who will risk confrontations with hostile aliens for the chance at killing a farn beast, something so rare in the systems humanity controls. Ri and Mia try to hide their traitorous thoughts as they lead Extrone toward the beasts, hoping to complete their mission quickly before Extrone’s impatience leads to wrath.

I loved Extrone’s character in this story. By far, it overshadows everyone else, but it works. I could picture Jeff Bridges playing the role, if this was a movie, barking out commands and delivering the slow, menacing dialogue.

I read a little about Neville, and it seems he was one who quickly vaulted into several of the big magazines. But he apparently felt that his work extended beyond the accepted boundaries of science fiction at the time. So he withdrew from science fiction and instead wrote texts in the field of epoxy resins. Yes, I’m serious.

“Angel’s Egg” by Edgar Pangborn — David Bannerman’s journals reveal an interesting account of the recluse’s final days. And it all begins when he discovers the most unusual egg he’s ever seen.

There is a lot of emotion wrapped in this tale. The ways the story wraps journal entries with letters and librarian notes is well done. Pangborn, from what I’ve read, enjoyed writing speculative fiction with an emphasis on human emotion. And that has had a lasting impact on the field. 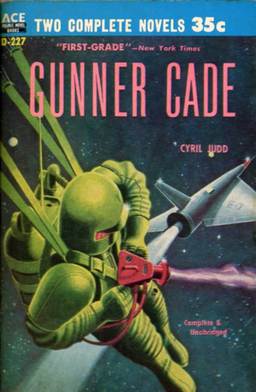 “Don’t Live in the Past” by Damon Knight — An accident in temporal shipments releases dangerous organisms in Earth’s past, sometime between the mid-Twentieth century and the late Twenty-First. To prevent their present from being altered, the governing authorities send Mazurin to observe and report. But while observing, Mazurin strands himself in the past. He faces the awful task of trying to mitigate changes to the future he knows and loves, yet he knows his actions can have subtle effects of their own.

The plot runs along pretty well and I liked Mazurin’s character. There’s a slight twist at the end (this is Damon Knight, after all), but there’s some foreshadowing that dulls the impact. Not a bad story, though.

“Mars Child” Part 2 by Cyril Judd (Part 1 appeared in the May issue) — Tony, the colony’s doctor, heads to Marsport to welcome the latest arrivals. Besides the new colonists, a famous journalist named Douglas Graham decides to join their small community for a short period. Tony hopes the journalist can help expose a plot against the colony — that Commissioner Bell and others are framing the colony for stolen marcaine. The reasons behind the setup are coming together — an increasing value of marcaine combined with interest in using the colony’s labs as a second factory.

Beyond the continued search for stolen marcaine (which may not even exist), Tony tries to help the parents of a newborn who struggles to eat. The child seems healthy, but he can’t understand the problem. Determined not to let another day pass without answers, Tony takes the child back to the hospital alone. And there he discovers the child’s remarkable trait — that it can’t breathe with an oxygen mask; instead, the baby breathes the Martian air.

The novel adds a lot of depth around the life on Mars and the pacing felt good. Graham has become one of the most interesting characters to me; Tony just seems too dour. This part of the novel made me think that perhaps I was wrong on some of my guesses about the marcaine theft, so I’m hoping I’ll be surprised by the ending.

Cyril Judd is the pseudonym of Cyril M. Kornbluth and Judith Merril. They only cowrote this and Gunner Cade (which was serialized in Astounding Science Fiction in 1952).

Matthew Wuertz’s last retro review for us was the May issue of Galaxy Science Fiction.

Man, you were quick getting this one out! I barely got in before your article went to page two. Fortunately (for me, anyway) I was ready.

Epoxy resins? I guess everyone has to have a backup plan. I had a much different take on “Hunt the Hunter” than you did. This could be seen as a classic SciFi theme, that of the Beta Male persevering over the Alpha, who is Extrone in this story. It might be overly simple to consider him a dumb jock, but I could not shake the image as I read the story. The ending was less than ideal for alpha and beta, and I thought it was funny how the only hint of the final sentence surprise was in the introduction. This was a fun read.

“Angel’s Egg” was certainly an emotional journey. As Bannerman unfolded the story of the egg through his letters, I was drawn in by the physical development of the creature, her emotional (and unique) attachment to her family, and the vague parallels to Bannerman’s own life. It is nice to see a thoughtful piece like this at what I consider the dawn of the more literate era of Science Fiction. Pangborn helped blaze the trail that preserved the genre and allowed it to evolve.

I usually like Damon Knight’s work, but “Don’t Live in the Past” came off as a little silly to me. The random words for unknown objects sent off serious alarm bells in my mind as I began this story, but I actually enjoyed learning what they were as the narrative progressed. Some of the incidents were much too convenient for my taste. Still, it was an amusing comic relief story in a mostly serious lineup.

I had to look up “dour” to see how you describe Tony, the doctor in “Mars Child.” That marks two words this week I came across for the first time (“laconic”). I agree that he has become “relentlessly sever, stern, or gloomy” (thanks, Wikipedia), but I see that as a necessity in his role as an indispensably skilled person in a world that is quickly falling to chaos. I find his serious demeanor admirable in the face of all of the situations, political and medical, that he is dealing with. I also enjoyed the appearance of Graham and the intrigue he brings to each scene. Funny how writers like to write about writers:) Like most developmental part-two-of-three serials, this story got a bit bogged down in details at times and seemed to be waiting for the other shoes to begin rolling (sorry for the non-laconic mixed metaphor). I did like the ending where we see evolution giving the baby the ability to breathe on Mars. I look forward to next month.

Good to see the topless woman ad on the back again. Four in a row next month?

Sorry about any typos. It is hard to edit when working in such a small box.

Thanks again Matthew. It is fun to share ideas. Do I have a full month to get ready for the next review, or are you going to jump in more quickly again? 🙂 Thanks again. GG

I spent a lot of time in an airport recently, so I was able to get a lot of reading in. So that’s why I’m a bit quicker with this review. 🙂

Thanks for your shared insight. I didn’t see Extrone as the dumb jock; I felt like he had intelligence. He was overconfident, but that made sense, given how he ruled over everyone.

I could see how Knight fans might not be as big on this tale. Again, I don’t think it’s a bad story, just not one of his better ones.

See you soon (but not too soon) with the next review, Gus!

I envy Gus for being able to follow along with you through these classic issues. I’ve been steadily collecting GALAXY for decades, and I look forward to having the time to read the early run. Your articles have really sharpened my interest, and when I finally do I’ll be re-reading your articles to compare notes.

Until then, keep up the good work!

Thanks, John! Feel free to comment on the articles after you read the issues, even in the distant future. So long as you haven’t closed my account by then, I’ll reply. 🙂

Ready when you are, Matt! I won’t start the next issue (August) of Galaxy until you post your next review (July). I am burning through the early issues of Imagination while I wait. Yikes. It is fun to read a B-list magazine sometimes, but haven’t I suffered enough?

Don’t worry, John. I am working my way through Black Gate too. I just finished issue 12. It’s like watching Firefly on Blu-Ray. Man, it is awesome work, but it just kills me more and more when I know the end is coming and way too soon.

Gus, I’ve finished reading it. I just have to find a spare moment to sit down and write the review. 🙂

Thanks for keeping up with me.