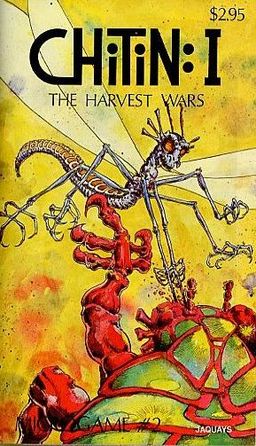 We’re back to reviewing the games that introduced me to fantasy and science fiction gaming. This is the second in a series, following my look at Steve Jackson’s classic Ogre earlier this month.

The second game I purchased from Metagaming (still by mail order, if I remember correctly) was Howard Thompson’s ambitious and imaginative science fiction wargame Chitin I: The Harvest Wars. I ordered it after seeing the advertisement in Analog magazine in 1978. The brief text of the ad read:

The intelligent insects of the plant Chelan go to war for one reason only. Food. This detailed tactical game pits varying forces of the specially-bred Hymenopteran warrior types against one another. Victory goes to the player who removes the most food — including enemy bodies — from the board.

Now, this was pretty cool. In 1978, science fiction games primarily meant things like SPI’s Outreach, and Avalon Hill’s Stellar Conquest. You got a bunch of starships and space marines, you plopped them down on a stellar map, and tried to blast the hell out of the other guy. Something like Ogre, in which one player took the role of an A.I.-powered supertank, was considered innovative.

Chitin, however, was genuinely different. There were no starships. No space marines. No planets ripe for the plucking.

There weren’t even any humans. Chitin was a true science fiction game — it placed you in an imaginative setting on a far away world, smack dab in the middle of a life-or-death struggle between two alien cultures.

Like all microgames, it shared a couple of appealing aspects with its predecessor Ogre: it could be set up, and played, in a matter of minutes. It was also about one-fifth the price of those big SPI and Avalon Hill games… no small thing when you’re an unemployed teen.

It was all too much to resist. My friends and I had played dozens of games of Ogre over lunch hour, and we were already looking for something a little different. Chitin, with its exotic alien setting and promise of a completely different set of rules and tactics, looked like it could be it. I mailed off my money and waited impatiently for it to arrive.

Chitin was Microgame #2, the second Metagaming title in the series. It was designed by Howard Thompson, edited by Steve Jackson, and first released in 1977.

The cover and interior art were by Paul Jacquays (click on the pictures above for bigger versions.)

The map and counters were simplistic and not very colorful, but they did the job. 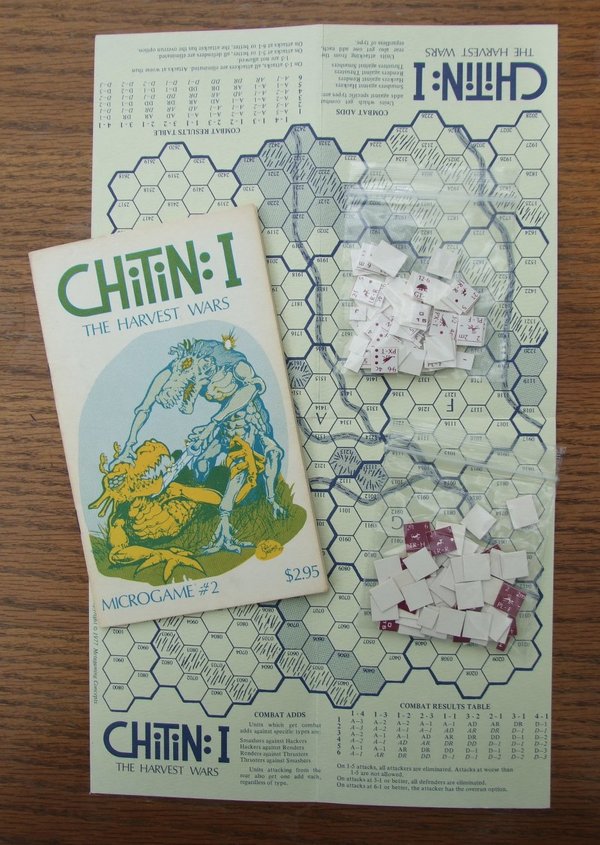 (Picture above by Eddy Richards.)

The second printing arrived in 1978, with a revamped cover and map. This was the version that came in the mail. 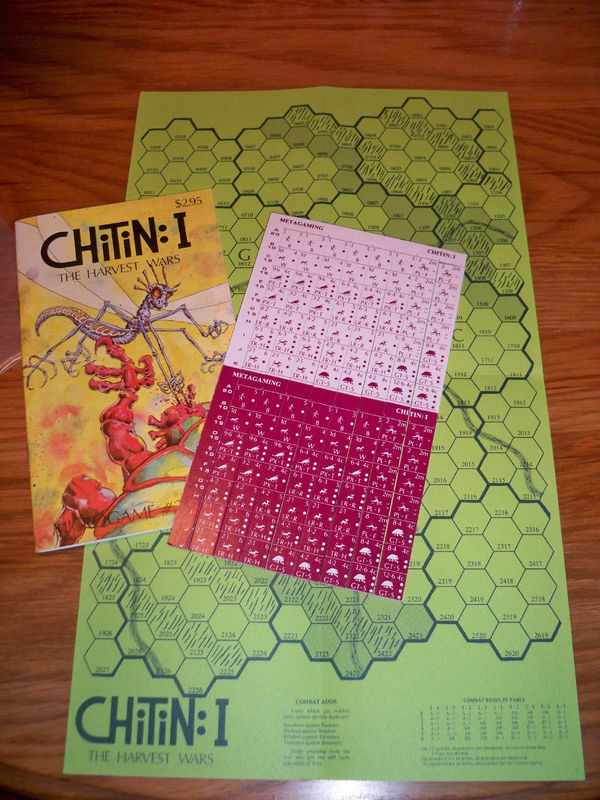 The rule book was a slender 16 pages and the setting, an alien world at the end of summer and the time of harvest, was highly imaginative, and reminiscent of classic SF. Howard Thompson cited Jack Vance’s The Dragon Masters and The Last Castle, as well as Frank Herbert’s Hellstrom’s Hive, for the inspiration in the Acknowledgements.

As promised, Chitin was easy to learn and a snap to play, with basic mechanics for combat and gathering food. Players controlled a variety of different insects in their quest to gather more food for the hive. 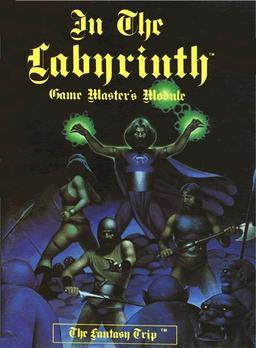 It didn’t take long to get pretty attached to your hive, either. Like Ogre before it, Chitin fired the imagination. Losing a war had pretty dire consequences for your insect colony. My most vivid memories of the game were in the hours after the board was put away, wondering what would happen to the losing side as summer ended and the hive retreated to face starvation and a long winter… would they survive to next summer? Or would a series of setbacks wipe out an entire culture? For a simple little game, Chitin packed an emotional punch.

So it’s not too surprising that one of the most intriguing aspects of Chitin I: The Harvest Wars was the fact that it was only a small part of a much more ambitious whole. The subtitle was “Tactical Combat from the Hymenoptera Game System,” and designer Howard Thompson had hinted several times in the pages of The Space Gamer at the impending release of his massively ambitious game covering all aspects of society and warfare on the planet Chelan. The thought of being able to play the complete life cycle of a hive — from birth to death, across multiple summers — was instantly appealing to anyone who played more than a few rounds of Chitin.

Alas, it was not to be. Metagaming fans waited for years for the game to materialize, but it never happened. The closest the game came to release was a 25mm range of insect miniatures, announced by Martian Metals, for a full-scale tabletop version. They were reportedly in the prototyping stage when Martian Metals went out of business.

The Hymenoptera bugs made a final appearance as monsters in the Metagaming role playing game The Fantasy Trip: In the Labyrinth.

Chitin, like most early Metagaming microgames, sold fairly well. After a series of poor sellers in later years, Metagaming went out of business in April 1983, taking most of the intellectual property with it; as a result, Chitin has been out of print for over 30 years.

But copies are still fairly easy to find; at any given time there’s as many as a half-dozen or so for sale on eBay. Expect an unpunched copy to set you back $15-20; complete played copies are usually less than half that.

This game was inspiring. I often faced my brother or wargaming friends in this struggle for food in Chitin and also for the doughnuts we brought to the gaming sessions.

I wonder if the creators of StarCraft had these bugs in mind when they developed the Zerg.

Why didn’t someone get the rights to this game and publish it again? Ogre is still a fun game.

Thanks for the memories John. I started writing science fiction after I played this game. We even made up new units and new rules for a campaign version. It was cool.

Thanks for the comments. Glad to find someone out there whose imagination was as fired up as mine was after playing CHITIN.

> I wonder if the creators of StarCraft had these bugs in mind when they developed the Zerg.

It’s funny — I thought the same thing the first time I played StarCraft! The Zerg reminded me a lot of the loyal insects in my little Chitin hive.

> Why didn’t someone get the rights to this game and publish it again? Ogre is still a fun game.

I’d love to see a new version. But by all reports, Howard Thompson has left the industry.

> I started writing science fiction after I played this game. We even made up new units and new rules
> for a campaign version. It was cool.

I never made my own rules for a campaign version, but I probably should have. I was convinced the broader Hymenoptera Game System would be epic, though.

Own this but haven’t played it in years. Like OGRE, I remember it as being quite fun, especially the harvesting bodies element.

John, you want me to write something up on Yaquinto’s French Foreign Legion? Ebay copies of that bad boy are getting to $200 now.

Holy cats! Seriously? And absolutely – that game deserves to be celebrated! (even if what you’ll be doing is getting people interested in a game they can’t have…)