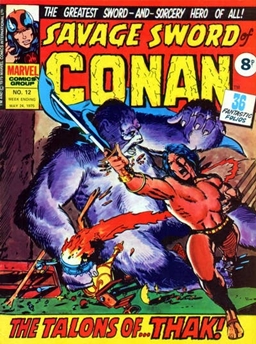 One of the cool things about being an active member in the Sherlock Holmes community is that I run across a broad spectrum of people with other common interests outside of the world’s first private consulting detective. Wally Conger and I have had back and forth conversations on versions of The Hound of the Baskervilles and other topics.

We may not agree on season three of Sherlock, but we do both enjoy reading Conan. So, I asked him to review “Rogues in the House,” which I knew he had just read. He was kind enough to do just that…

By the time Robert E. Howard launched into writing “Rogues in the House” in January 1933, he already had 10 Conan tales under his belt. He was very comfortable with the character.

In fact, upon publication of the story in the January 1934 issue of Weird Tales, Howard wrote to fellow writer Clark Ashton Smith:

Glad you liked ‘Rogues in the House.’ That was one of those yarns which seemed to write itself. I didn’t rewrite it even once. As I remember I only erased and changed one word in it, and then sent it in just as it was written. I had a splitting sick headache, too, when I wrote the first half, but that didn’t seem to affect my work any.

I wish to thunder I could write with equal ease all the time. Ordinarily I revise even my Conan yarns once or twice, and the other stuff I hammer out by main strength.

Howard didn’t write his Conan stories in chronological order. Instead, they were written and published as if the great barbarian were randomly and drunkenly spinning tales of his adventures around a campfire. The first written and published, “Phoenix on the Sword,” actually occurs near the end of the Conan timeline, when the Cimmerian was in his mid-40s and ruler of Aquilonia. It was followed by tales from his life as a thief, a pirate, a mercenary, a bandit, and a burglar, in no particular order. 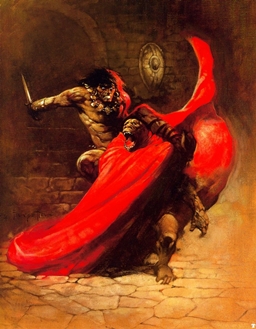 Even so, friends who decide to dig through the Conan saga sometimes ask me to recommend a “good starting place.” I always suggest “Rogues in the House.” It was the seventh Conan story published, although it was, as I said before, the eleventh written. And it’s set early in Conan’s career, when he was still thoroughly unhampered by any civilized morals.

Possibly because it “seemed to write itself,” the story doesn’t present as much world-building as many other Howard stories do, so it’s newbie-friendly. It’s a no-funny-business, rough-and-tumble action yarn, and it doesn’t aspire to be more than that.

It’s light on the magic common to many Conan stories; in fact, the principle villain, Nabonidus, is more scientist than sorcerer, even though he bears the title of Red Priest (Of course, the barbarian sees most of this science as a sort of witchcraft.). As such, the story is a good gateway to the other 20 tales that make up the Howard canon.

But even this simple, straightforward tale is stuffed with great plot devices — political intrigue, revenge, death chambers, a bloodthirsty man-ape, a blackmailing “magician,” and a unique companion for Conan. Hell, it even offers a rare comical Conan moment —  “Bewildered and half blinded [by drink], he missed the open door in his headlong flight, and dashed his head against the stone wall so terrifically that he knocked himself senseless.” You’d expect a scene like this in a Three Stooges movie, not a Conan adventure.

So if you’re looking for a spot from which to launch into Robert E. Howard’s stories of Conan the Cimmerian, I think none is better than “Rogues in the House.”

By the way, “Rogues in the House” was immortalized by the great Frank Frazetta with a painting for one of the 1960s Lancer paperbacks. It depicts Conan’s battle with Thak, the ape-creature, and once seen, it’s never forgotten.

Wally Conger has been a fan of all things pulp — from Edgar Rice Burroughs, to The Shadow, to today’s “new pulp” — since, like, forever. He’s a lifelong Sherlockian, has founded two Sherlock Holmes societies, and has even climbed very near to the top of the Reichenbach Falls. His blog can be found at wallyconger.com.

Definitely one of the best REH stories – and Dark Horse’s adaptation was brilliant.

I’ve been reading all of these Howard posts but I’ve been away from home so I couldn’t comment. I got to see the REH museum this summer during the Barbarian Festival. If you are a REH fan then you need to make the pilgrimage.

I think the Frazetta covers are the finest ever and I was initially attracted to the cover which led me to the stories. As you said, you can pick up a Conan story and there isn’t a series or a trilogy to work so it doesn’t matter where you start. I agree that “Rogues in the House” are a good place to start.

One thing I will say about the Conan series is that my first book I read was Lancer’s Conan of Cimmeria and the first story was Lin Carter’s “The Thing on the Monolith”. For me they were all great stories but the little blurbs at the beginning of the story about Conan’s adventures in between the stories were important. I liked the fillers and sometimes I think that look down on Lin Carter don’t appreciate what he did for Conan. I’m not sure if the series would have been revived without Carter. It was buried in the past. Carter also added both stories and I believe he did the blurbs as well. This brought a continuity that Conan never had before and made the timeline that we use today.

I also think that the Conan comics reached many would be Conan readers. Many of the Conan readers I know started off in comics and then transferred to the books and not the other way around as in my case. Roy Thomas, John Buscema, Ernie Chan, and a host of others brought more into the fold.

I totally agree with GreenGestalt that the Dark Horse adaption has been a welcome adaption and excellent work. They might be leading the next wave forward.

There’s no doubt that the Frazetta covers are legendary within the genre.

I too like the intro blurbs. I thought that those were by de Camp, not Carter, but I wouldn’t bet my house on it. Well, my house, maybe, but not a good one…

We know that REH was a fan of Arthur Conan Doyle. Here’s a good summary of “The Tiger of San Pedro”:

Notice the name of the exiled dictator? “Murillo”. Garcia’s “brutish” cook, apparently only barely articulate, is suspected of a murder. Murillo is the actual murderer. Murillo gets away, but is later murdered by “Nihilists”.

Does anyone else see here some names and elements (wildly and masterfully rearranged by Howard) which culminated in “Rogues in the House”?