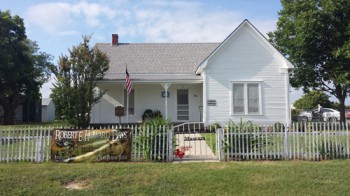 I’m not sure there’s quite anything like Howard Days, held each summer in Cross, Plains, TX. It’s a weekend celebration of all things Robert E. Howard and it’s helped to keep Howard’s legacy alive. Though I lived in Austin, TX for a few years, I never made it to Howard Days. So, I turned to the best fan journal (newsletter/fanzine…) I’ve ever come across, REH: Two-Gun Racounteur.

And founder Damon Sasser (2014’s Featured Guest) was kind enough to write a post about the 2015 Howard Days, which also featured a healthy (or perhaps, unhealthy) dose of H.P. Lovecraft as well. Thanks, Damon!

This past month on June 12th and 13th the annual Howard Days celebrating and remembering Robert E. Howard was held in Cross Plains, Texas. Even though it is a two day event, fans start drifting into town early in the week, with Thursday afternoon being sort of a soft kick-off for the weekend. The Howard House Museum was unofficially open allowing fans to wander through it and visit the gift shop.

A lot of folks ate dinner at the Cross Plains Senior Center on Main Street with the proceeds going to benefit the non-profit organization; this year a fish fry was on the menu. After dinner, the townspeople and Howard fans gathered to watch the Barbarian Days (the annual Barbarian Days Festival coincides with Howard Days and was held on Saturday).

After the parade, everyone gathered at the open pavilion adjacent to the Howard House, which is used during Howard Days as place to congregate and cool off – after all it is summer in Texas. 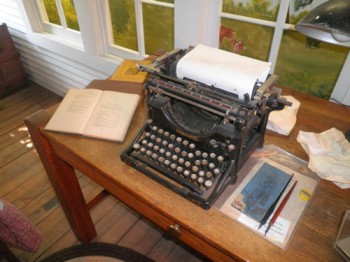 The next morning, coffee and donuts were provided at the pavilion for a small donation and event-wise things started popping. The Howard House Museum opened with docents present, there was a bus tour of the areas surrounding Cross Plains to places where Howard lived and hung out as a youngster and the Cross Plains Public Library opened and had on display a number of original Howard typescripts that Glenn Lord donated some years back.

Of course, there was the annual postal cancellation where you could get a letter or postcard postmarked with a special commemorative cancelation stamp. This year the stamp was designed by guest of honor artist Mark Schultz.

The topic of the first Friday panel was ‘Conan vs. Cthulhu,’ manned by Howard scholars Mark Finn, Jeff Shanks and author Scott Cupp. The panelists presented a lively discussion on how Lovecraft and Howard influenced each in their writings, particularly on the topic of integrating the Cthulhu Mythos in their stories.

Next on the agenda was a hot dog lunch at the pavilion, with the dogs coming fresh off the grill. Then everyone gathered at the Library (where most of the panels were held) for Rusty Burke’s interview of the guest of honor Mark Schultz.  The Robert E. Howard Foundation Awards ceremony was held immediately afterward hosted Burke and Bill Cavalier.

The panels and other activities allowed for some down time and a lot of people brought items to sell at the pavilion, the main hangout for Howard Days. The REHF Press was there, as was Mark Schultz signing books and prints. Skelos Press and a number of others were also selling their wares under the pavilion roof. Friday afternoon also included a bus tour to Howard’s grave in the Greenleaf Cemetery in Brownwood.

In the evening, folks congregated at the Cross Plains Community Center for the Silent Auction and Banquet, with guest of honor Mark Schultz giving a speech and slide presentation on his artwork and influences. He also discussed how his version Conan for the Wandering Star and Del Rey books evolved.

After the banquet, the ‘Fists at the Ice House’ panel featuring Howard scholars Mark Finn, Chris Gruber and Jeff Shanks was held at what was the town’s ice house in Howard’s day. At the same time fans were taking turns reading REH’s poetry from the front porch of the Howard House. This activity was repeated on Saturday night as well.

Friday evening wrapped-up with everyone gathering at the pavilion to talk Howard. The hardiest of the bunch stayed up until the wee hours of the morning before calling it quits.

The ‘A Means to Freedom: Letters of REH and HPL’ panel was the first of Saturday’s panels. Panelists Rusty Burke, Jonas Prida and Dierk Guenther discussed the friendship and correspondence between the two Weird Tales icons, highlighting their differing personalities and views on life.

All day Saturday the Swap Meet for REH items at the pavilion continued, along with the Barbarian Festival located just down the road the from the Howard House. Of course the Robert E. Howard House Museum and Cross Plains Public Library were also open for visitors.

After lunch panelists Mark Finn, Jeff Shanks and Patrice Louinet discussed ‘Robert E. Howard and Fantasy Gaming’ at the Library. There are currently two Conan games in the works, a board game from Monolith Productions and a RPG from Modiphius Games.

The final Saturday panel was an interview with special guests Brad and Jeff Howard, great grandsons of Dr. Howard’s brother, David Terrell Howard. Brad’s daughter Amanda was also present. Howard scholar, author and editor Patrice Louinet conducted interview and Jeff and Brad shared some family stories and showed the audience the Howard Family Bible and Dr. Howard’s copy of Jenkins’ A Gent from Bear Creek, which was in poor condition, but still only one of 13 known existing copies.

Usually after the final panel of Howard Days, everyone caravans out to the Caddo Peak Ranch about 8 miles West of Cross Plains. The Middleton family owns the ranch and each year hosts a Texas style chuck wagon barbeque on the property for the Howard Days attendees. The working ranch features two high peaks where Howard used to climb up and enjoy the view.

Howard fans can make that same climb with an assist from the ranch hands that drive folks halfway up on flatbed trailers. But due to some unforeseen circumstances, the event had be held at the pavilion this year. Still, a good time and great food was had by all.

If you could not attend Howard Days this year, there is always next year. Usually around the end of the year announcements start being posted on the REHupa website and the Howard Days blog regarding the guest of honor, subject matter of the panels and information on other events. If you are a true Robert E. Howard fan, Howard Days is the perfect place to meet and interact with like minded people.

I wrote a little photo essay after touring REH’s house at Howard Days a few years ago: http://www.raphordo.blogspot.com/2013/06/post-oaks-and-sand-roughs.html

I have a picture there of a postcard written from HPL to REH; in the picture it’s too small to read, but, amusingly, it’s written very much in the Lovecraft style. The place is definitely worth visiting; I believe arrangements can be made to tour the house any time of the year.

How many people are usually visiting the event? It isn’t exactly in a central location or in the neighborhood of other famous attractions.

Usually about 150 attend Howard Days over the 2 day event. It does take some determination to get there, but it is well worth the trip. This year folks came from as far away as Japan and France, and all points in between.