It’s that time again, folks: the short story roundup! June was a pretty good month, with some nice work from lesser-known (to me, at least) authors as well as some bigger names. A good sample of work from the spectrum of heroic fiction.

While there’s not a lot of action in either of Swords and Sorcery Magazine Issue 41‘s two stories, there is some very good writing.

The first, “Wind Song” by Kevin Cockle, is my favorite story this month. The narrator is a member of a class that possesses the special talent to control djinns, which are then used to power flying ships. His nation has fought great wars against the Kyberi, a people who fly dragons into battle. In the past the dragon-riders were often victorious, but now their enemies have developed weapons and stratagems to defeat them.

When the ship he directs is pursued by a dragon, the narrator finds he is able to make a psychic connection with its rider. From her he gains insights into the enemy he has never had before.

It’s a simple story with not much plot, but Cockle writes wonderfully.

The waters in the Bay of Nandorin are freakish clear – like stained blue glass – and one can see clearly the sunken hulks of long-ago warships littering the sea-floor like scattered toys. Though a man grown, I became a boy again whenever we made Nandorin, peering down into the pristine depths at the haphazard city of ghost-ships beneath. On the surface, stone towers stood like widely spaced square teeth across the mouth of the bay: their anxious sentinels craning their necks skyward to track our dragon-shadow.

The issue’s second story, “The King’s Blacksmith” by Cameron Huntley, is about the rise of a young and supremely talented smith apprenticed to the King’s own smith. Only they are able to work the magical materials that allow the creation of the royal house’s enchanted weapons. It’s a story of dark discovery and features some top-notch world-building. 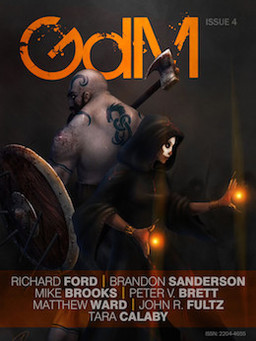 Next up is Grimdark Magazine #4. As editor Adrian Collins proudly points out, the magazine is now a year old. Sure, unlike the free goodness of Heroic Fantasy Quarterly and Swords and Sorcery Magazine, you have to pay for this one, but so far, it’s been worth the $2.99.

“Brazen Dreams” by Matthew Ward is about a hunt for lost technology in outer space. It’s a nasty little tale of a thief, her mentor, and scoundrels trying to outwit one another within the depths of a hollowed-out asteroid.

The next story is an excerpt from the the novel, A Crown for Cold Silver by Alex Marshall. A knight and the band under his command have arrived in a small mountain village with obvious bad intentions. There’s not much plot to this tale, but there are intriguing hints of the larger world Marshall’s characters inhabit. Interestingly, Alex Marshall is a pseudonym for an author already published in several other genres.

“Ashes” by Tara Calaby is a depressing account of what happened after Cinderella married Prince Charming. Told from Cinderella’s, the Prince’s, and the Fairy Godmother’s points of view, Calaby’s prose is very good. But I wasn’t especially moved by the story, being little more than an a simple inversion of happily-ever-after into quite-unhappily-ever-after.

Mike Brooks’ “Redemption Waits” is another science fiction story. Ichabod Drift and his crew of ne’er-do-wells are trying to swoop in and get their hands on some illegal weapon plans before the competition arrives. It’s just the nice bit of action-packed caper story that I’m a sucker for. This same band of thieves stars in Brooks’ novel, Dark Run.

There’s another excerpt, this time from The Liar’s Key by Mark Lawrence. There isn’t much story but it does provide a nice taste of Lawrence’s style. I’ve read Prince of Thorns, for one, and it’s great.

The longest story in this issue is “The Halfwyrd’s Burden” by Richard Ford. Oban Halfwyrd is a Warden, one of an order of warriors that patrol the border between the Free States and barbaric Golgartha. While in a wild frontier town, Oban finds himself facing a Dead Priest. The priests follow the Lord of Crows — the Old God of the dead — and deliver justice for the common people when official channels fail. A chase across back alleys and out to the verge of the forest comes to an abrupt end with the sudden appearance of a band of bloodthirsty barbarians. There’s a great sense of place, in this case the cold, dangerous edge of civilization out near where vicious enemies lurk and strange forces linger. Events in this story are expanded on in Ford’s Steelhaven novels.

Not content to supply the world with just fiction, Grimdark Magazine also carries interviews and essays. In fact it’s one of these that’s the real highlight of the issue: an essay by Black Gate alum, John R. Fultz, titled “The Mud, the Blood, and the Years: Why Grimdark is the New Sword and Sorcery.” Not only does he make a pretty convincing case for grimdark indeed being the new swords & sorcery, he gives a very good history of the genre. With terrific enthusiasm he tells of the birth, rise, and fall of the genre that inspired the creation of the likes of Black Gate and my blog, Swords & Sorcery: A Blog.

There’s also an interview with Brandon Sanderson, author of the Mistborn and The Stormlight Archives series. My aversion to long series composed of thick books has kept me away from any of his novels, but based on this conversation I suspect I might enjoy them nonetheless.

According to our illustrious leader, John O’Neill, “Black Gate is becoming an important site for short fiction writers, and people who blog about short fiction.” I’m hoping that means there’s a growing audience for the stuff. Just remember, new stories keep coming only as long as there’s a market for them, so go read them and let the editors and authors know what you think.

So that’s the lot for this past month. In fact, that’s my lot for the month. I’m taking the rest of July off. I’ll be back for another roundup in August, then off again until September.