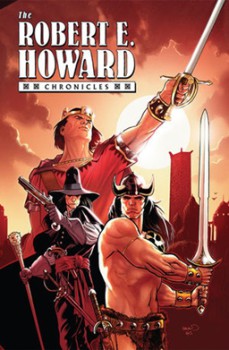 Our summer of Robert E. Howard is just rolling along here at Black Gate. The latest entry delves into the comic book/graphic novel world of Howard’s works. I don’t know much about this area, but even I’m aware of Roy Thomas.

Bobby Derie is going to take us on a tour focusing on the non-Conan adaptations of Howard’s works. You’re going to learn about a quite a few you’ve missed. So, on we go!

The Golden Age of Comics passed Robert E. Howard by completely. The Silver Age treated him almost as poorly, save for in Mexico, where La Reina de la Costa Negra spun out the fantastic adventures of a blond Conan as second-mate to the pirate-queen Bêlit, and “The Gods of the North” found a few pages in Star-Studded Comics #14 (Texas Trio, 1968), and Gardner F. Fox borrowed liberally from Conan in crafting “Crom the Barbarian” for Out of this World (Avon, 1950).

In an era when DC Comics and their contemporaries felt no qualms stealthily adapting the horror and science fiction stories of H. P. Lovecraft, Arthur Machen, and Ray Bradbury without permission or credit, they apparently did not touch the evocative weird tales of Robert E. Howard; neither did the sport comics or westerns or detectives.

In 1970 when Marvel Comics licensed the character of Conan the Barbarian from Glenn Lord, acting as the agent for the Howard estate, they were on unsure ground; up until this point, Marvel had mostly worked on their own characters and properties. Yet the barbarian proved an unexpected success as the issues wore on, with writer Roy Thomas receiving permission even to adapt some of Howard’s original Conan stories to the comics, including such classics as “The Tower of the Elephant” and the novel The Hour of the Dragon.

The success of Conan led Marvel to license additional of Howard’s characters for adaptation — Kull of Atlantis, the Pictish king Bran Mak Morn, and the Puritan adventurer Solomon Kane — as well as the creation of original spin-off characters, most notably Red Sonja, based in part on Howard’s Red Sonya of Rogatino.

These are Howard’s barbarians, who in one form or another have been published almost continuously for forty-five years, in dozens of comic series, one-shots, magazines, graphic novels, and newspaper strips.

Yet for all that Robert E. Howard’s fame may largely rest with his barbarians, they were not his only characters. In his twelve years as a pulp writer he took a stab at nearly every genre there was: science fiction, detective stories, spicy stories, weird fiction, sports, westerns, even confessionals.

Readers who think themselves well-versed in the Howard milieu just from his barbarian comics have often missed out on the exploits of boxer Kid Allison, Sailor Steve Costigan, occult detective John Kirowan, western bumpkin Breckenridge Elkins, El Borak, Black Vulmea, Wild Bill Clanton, and Irish adventurer Turlough Dubh O’Brien among a dozen other of Howard’s characters… at least, under those names, as Roy Thomas relates:

I decided it would be fun to do what L. Sprague de Camp was doing in some of the books, which was to take a non-Conan story and turn it into a Conan story by changing the hero to Conan and bringing in a supernatural element if there wasn’t one and changing a few things around.
— The Dark Man Vol. 5, #2, 92

In this way were adapted such stories as “The Gods of Bal-Sagoth” — originally a Turlough Dubh O’Brien story — in Conan the Barbarian 17-18; “The Shadow of the Vulture,” “The Blood of Bel-Shazzar,” “The Garden of Fear,” “The Grisly Horror” and other tales.

Conan, Red-Sonja, Kull, and other barbarians have stood in for El Borak, Agnes of Chantillion, Cormac Fitzgeoffery, James Allison, Kirby McDonald, and others of Howard’s heroes — and even if Thomas was not directly adapting Howard’s stories into Conan tales, he sometimes adapted L. Sprague de Camp’s adaptations, so that diligent readers of the old Conan comics were absorbing rather more of Howard’s stories than they might have guessed — albeit second or third-hand. 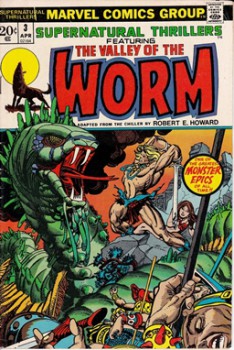 The success of the licensed Howard properties encouraged Marvel to try some adaptations of Howard’s other material, focusing mainly on his weird and horror stories: “Dig Me No Grave” in the revived Journey Into Mystery #1 (1972) (and again in Masters of Terror #2 in 1975), “The Monster from the Mound” and “The Thing on the Roof” in Chamber of Chills #2 and 3 (1973), Gil Kane’s superb adaptation of “The Valley of the Worm” in Supernatural Thrillers #3 (1973).

These early efforts seem tied to Marvel’s efforts at resurrecting a horror line in the face of the Comics Code Authority, but later coalesced around the black-and-white Savage Sword of Conan magazine, which sidestepped the CCA’s censorship and had a more dedicated audience. Here was adapted the seminal Cthulhu Mythos story “The Black Stone” (SSoC #74, 1982), “Old Garfield’s Heart” (SSoC #203, 1992, as “Old Garrod’s Heart”), and many other tales.

Bran Mak Morn found a home in these pages, as did Solomon Kane and King Kull, as well as a number of Howard’s poems, illustrated or adapted to comics for the first time. Still, for the most part the contents of Savage Sword followed the same formula in the Conan the Barbarian: sword and sorcery, or adventurous tales with a weird element.

Outside of Savage Sword, Marvel included a few adaptations in its Epic imprint. Roy Thomas and Tim Conrad’s take on Almuric, a science fiction hero Howard created in the vein of Edgar Rice Burrough’s John Carter of Mars, ran in Epic Illustrated #2-5 (1981-1982). Scott Hampton later adapted one of Howard’s most acclaimed horror stories in the graphic novel Pigeons From Hell (1988), since republished in Hampton’s own Spookhouse 2 (IDW, 2005) and the Mammoth Book of Zombie Comics (Running Press, 2008). 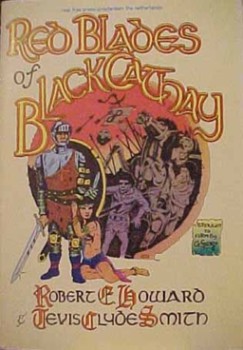 Other creators got in on the action, though still largely following Marvel’s barbarian-heavy line. Heavy Metal Magazine published illustrated versions of Howard’s poems “The Heart of the Sea’s Desire,” “A Word from the Outer Dark,” “The Ghost Kings” in 1973 (vol. 1, #3). Richard Corben and John Jakes adapted “The Valley of the Worm” as Bloodstar, published by Morningstar Press in 1976, later revised by John Pocsick and republished by Ariel in 1979, and serialized in Heavy Metal #45-52 (1982-1983).

The Real Free Press issued a standalone adaptation of Robert E. Howard and Tevis Clyde Smith’s Red Blades of Black Cathay in 1975. By the late 80s and early 90s, Dark Horse published mini-series adaptations of Kings of the Night (1989), Cormac Mac Art (1990), a collected edition of the Epic Almuric (1991) and Iron Hand of Almuric (1991).

To the little-known Conquest goes the honor of having first published adaptations of some of Robert E. Howard’s other fare; including the western The Vultures of Whapeton (1991), horror Lord of the Dead (1992), the spicy Songs of Bastards (1992), and more westerns in Blood and Thunder (1992).

Craig Hamilton published a comics art portfolio adaptation of Howard’s poem Sea Woman in 1992, and in 1995 Millennium comics – probably as an adjunct to their Lovecraft comics adaptations – took the odd step of publishing a comic book collection of Howard’s poetry titled Black Reaper.

Marvel ceased publication of all Conan and related titles in 2000; the era ended and other companies vied for the license. One of the most notable is Cross Plains Comics, a small publisher somewhat derided for the quality of their offerings, yet devoted to bringing the works of Robert E. Howard to print. 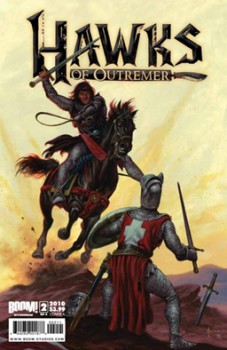 In 2003, Dark Horse Comics received the license to Conan and Kull as comics characters, beginning a new cycle of adaptations of Howard’s barbarian stories. However, in addition to the barbarians they have published a new adaptation of Pigeons From Hell (2008) and the anthology comic Robert E. Howard’s Savage Sword (2010-) has published both long-out-of-print material, like the adaptations of Bran Mak Morn from Savage Sword of Conan, but outstanding adaptations of Howard’s more obscure characters: El Borak, Dark Agnes, Sailor Steve Costigan, John Conrad, John Kirowan, Breckenridge Elkins, and the Sonora Kid, as well as never-before-adapted stories like “In the Forest of Villefere” and “Mountain Man,” as well as more of Howard’s poetry.

Comic readers are, after decades, getting a taste of a broader range of Howard’s talents and characters then ever before — and, however belatedly, other publishers are also recognizing the wealth of untapped Howard stories. BOOM! published an adaptation of Hawks of Outremer in 2008, and Eureka’s Graphic Classics line included Howard’s “Knife-River Prodigal” in Western Classics (#20, 2011) and “The Beast from the Abyss” in Canine/Feline Classics (#25, 2014).

No summary of Robert E. Howard in the comics would be complete without a mention of the influence of Howard beyond mere adaptations — from the first reference of Unausprechlichen Kulten [sic] in Marvel Premiere #4 (Marvel, 1972) and Marvel’s gradual incorporation of the Hyborian Age into their comics chronology to the spate of pastiches and parodies like the early issues of Dave Sim’s Cerebus the Aardvark, the influence of Howard and his creations on comics has been considerable.

Comic writer/artist Rachel Kahn even explored the personal influence of Howard’s characters in her series By Crom!, an autobiographical comic which features Conan the Barbarian as her spirit guide.

It has been said that Robert E. Howard has put much of himself in his characters and stories — and certainly his legend has become a part of the mythology of his stories, with writers and artists collaborating to pay homage to the man who created such enduring myths for the modern age. Howard himself is the ongoing subject of “The Adventures of Two Gun Bob,” a biographical comic strip by Jim and Ruth Keegan.

Taken from his letters and memoirs, these small episodes give the full flavor of Howard’s life and personality, and the authentic feel and power from them is reinforced by the care taken by the Keegans, whose scholarship and attention to detail in referencing Howard’s letters, memoirs, and surviving photographs provides fans with the nearest glimpse at the man that anyone living can hope for.

Bobby Derie is the author of the Collected Letters of Robert E. Howard – Index and Addenda (2015, Robert E. Howard Foundation Press) and Sex and the Cthulhu Mythos (2014, Hippocampus Press)

Like most I was drawn to REH (and most fantasy) by Conan but indeed it’s only the surface of his works. Good article!

GreenGestalt – Many of us at Black Gate love Conan. And I think REH’s Conan tales contain the some of the best writing in the entire genre.

But after I wrote my post on REH’s hard boiled private eye, Steve Harrison (link in the post above), I realized BG had never done a post on El Borak (there probably is one, I’m just too clueless to find it).

And that got me to thinking about all of REH’s “other” stuff that absolutely deserved to be talked about more. When Paul Bishop gave us that fine post on the boxing stories (Howard’s favorite genre, I believe), a light bulb went off.

So Black Gate decided to solicit contributors on a wide range of REH topics: primarily not Conan.

There will be a bit of Conan (including our next post, I believe). But ‘Discovering Robert E. Howard,’ at heart, is about celebrating the diverse talents of REH.

Cthulhu, westerns, historicals, horror: we’re going to try and tackle it all. Well, a lot, not all!

Hopefully, after the last essay has been posted, readers will have decided to check out some of Howard’s works.

This is an excellent post and a resource of comics work on Howard’s lesser known works. Bookmarked.