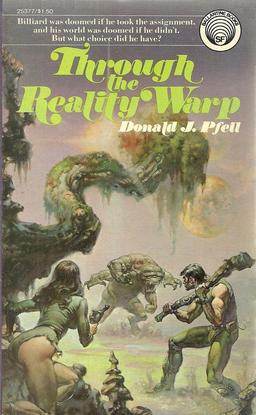 I have friends who wonder why I bother with old paperbacks. If there’s one thing tablets have made obsolete, it sure seems to be the need to collect books. Of course, I collect old paperbacks because I love them, not because it’s the only way to enjoy them. But in many cases, it really is the only way to get a copy of an old book. I type the words “There is no digital edition” at the bottom of at least a third of these Vintage Treasures posts (and about 15% of New Treasures, now that I think about it.)

The latest example is Donald J. Pfeil’s 1976 space adventure Through the Reality Warp. Pfeil is a minor SF writer with a brief career and only two other novels to his name, Voyage to a Forgotten Sun (1975) and Look Back to Earth (1977). Not one of his books was ever reprinted. If you have a Kindle or a Nook, Pfeil will remain ever a mystery. But copies of the Ballantine paperback start at $0.01 online — cheaper than that digital book you were going to order.

“You mean even if I succeed, it’s still a suicide mission?”

Latham Billiard stared at the four men standing before him… the four men who could not meet his eyes, the four men who were asking him to navigate a ship through a one-way black hole — into an alien universe — to destroy something totally unknown.

Billiard could not believe what he was hearing!

“If you don’t succeed,” the Guild General said, “It’s death for every living thing in our universe.”

What could a soft-hearted, thick skinned, cracker-jack mercenary like Billiard say? After all , it wasn’t every day a man was asked to save a universe he would never see again…

Through the Reality Warp was published by Ballantine Books in February 1976. It is 164 pages, priced at $1.50 in paperback. The cover is by Boris Vallejo. It has never been reprinted, and there is no digital edition.

After a long drawn out war with Youngest Wife (she is actually the only wife I’ve had) I agreed to a compromise to give up a lot of books. She laid siege on me subliminally with “Horde” shows and tried to tell me that I had a horde mental disorder. This got me riled because no body but no body wants to be like the poor sods who collect mountains of trash and my books aren’t trash! If you haven’t seen the TV show “Horders” you know that they have psychologists who tell the person about their mental affliction. Then they get all their junk and they have 15 seconds to decide to throw their stuff away or keep it. She has a psychiatrist friend who of course would back up anything my wife says. So there I was, outflanked, subliminal TV show themes, and a ton of books that her psychiatrist calls junk that I call treasure. So,in a moment of weakness, I agreed to part with my books with the compromise that I get to buy them on Kindle. I went through my bookshelves and cleared out any book that I couldn’t buy on Kindle. When I hesitated for more than 15 seconds when I saw cover art with tentacles on it the psychiatrist would scream, “See! HORDER!”. John, she doesn’t even think like that tentacles or she-babes in chainmail bikinis or any of that stuff is cool. Sadly I don’t have any friends who are art critics that could have rebutted psychiatrist-psycho woman and point out that Boris Vallejo is bitchin cool and not trash. Honestly, when I see a Boris Vallejo painting my mind grows numb and I want to have it. If there is a mental disorder for that then I’ve got it in spades.

The good news is that I’ve been giving my books away and I have tons teenagers who think I’m a hero. They frequently say, “Thanks Mr. Ape!” when they see that Boris Vallejo book cover which makes me have a man cry when I think of the loss. I often get a “Hey Mr. Ape, that book was cool! Do you have any more Conan books?” Which conflicts me to say “Scram kid!” because he ain’t touching my Frank Frazetta stuff, or to say, “Here, here is a good one. Do you think Conan will get out of the snake’s clutches?”

Meanwhile I get to savor itty bitty book covers on Kindle. Well that got me thinking. Why don’t publishers make bitchin cool displays for eBooks—just the covers. You do it with your monthly magazine spread and I think that your idea is on to something. For a buck or two you could have a collage of book covers and make them giant shape to scan the art or what have ya. Hell, if they can’t sell the book they might at least be able to sell the cover right?

I enjoyed VOYAGE TO A FORGOTTEN SUN to some extent, didn’t bother with any more Pfeil though.

As I recall, he was also the editor of the short-lived SF magazine VERTEX.

I think every serious collector has probably been confronted with the show Hoarders at some point.

I remember giving a tour of my house to a friend who owned a bookstore. She seemed surprised I had more books than her inventory. Her first comment to me when we were done with the tour was, “Have you ever seen the show Hoarders?” If a fellow book collector and seller doesn’t understand, then I guess there’s no hope.

I’m sorry to hear your wife made you get rid of so many books. She’ll be sorry after the coming economic collapse, when paperbacks are the only form of trusted currency.

> As I recall, he was also the editor of the short-lived SF magazine VERTEX.

Ah! I should have known that. Thanks for pointing that out.

I really liked Vertex. I had a heck of a time tracking down the issues (I eventually found most of them at Windy City Pulp and Paper, as I recall).

Vertex had a rep as a decent 1970s slick SF magazine, if I remember correctly. Quite a bit different from the straight-ahead adventure pulp I associate with Donald J. Pfeil. I would never have made the association if you hadn’t pointed it out.

> The happiest homes are ruled by the doctrine of Mutually Assured Destruction.

Good advice, Thomas. My wife had a quiet corner in the basement where she did her planting, until I overran it with magazines. Now she refuses to go down into the basement. There are always defeats, even in victory.

I just wish my mother would stop sending me links to news stories about people crushed to death in their homes under stacks of old newspapers. My newspapers always go out to the recycling.

That’s why I never stack books taller than my head. It’s only common sense.

I suppose the secret would be to just layer them evenly on the floor, at least until your head starts hitting the ceiling.

I’ve started to do that in the library. 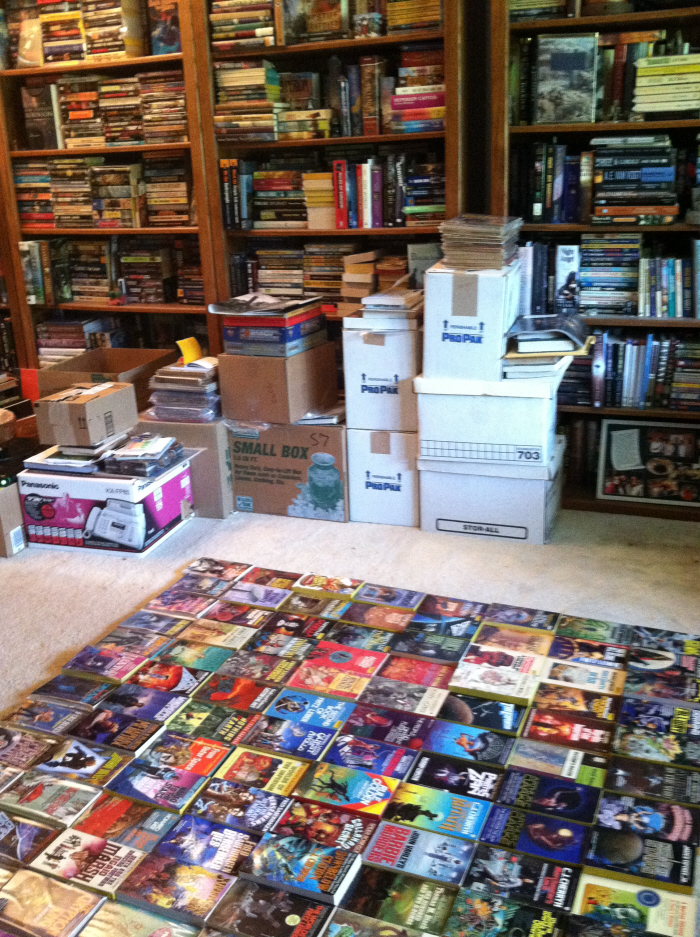 All right, what’s all this then?
Books and hoarding?
Lots of people are writing things here but nobody is laying down the Righteous Truth.

Hoarding is for junk. If you have 300,000 plastic pink flamingos you have a problem and should do something about it. There’s no use for them and people will pity you.

Books are different. They are not junk. If you have 300,000 books you don’t have a problem, you have a library. There’s endless use for them and people will envy you.

Seriously, you can imagine people saying, “Gorblimey, but that house has too many plastic pink flamingos in it.”

But can you imagine them saying, “Garsh, that library has too many books in it.”?

No. You can’t imagine it because nobody could possibly say such a preposterous, hateful, anti-life thing as that.

And if someone actually ever mananged to utter such cortex-shattering nonsense, I ask you, what kind of person would that have to be? Would they be anybody you’d want to share a root beer with?
I think not.

I tip my hat to you, Messrs O’Neill and Hocking.

(I keep wanting to say “tip my hats”, but that clearly wouldn’t be right.)

Don’t worry guys. It worked out. Thomas is right that MAD is beneficial to sustain a marriage. After clearing my bookshelves I bounced Youngest Wife on my knee and then paused in thought. I told her that it was so therapudic for me that she might want to try it with her shoe and purse hoarding problem. She had a terrific look of shock on her face and her eyes bolted wide. I haven’t seen a single episode of Hoarders since. She also organized her shoes into neat little racks which saved a lot of space. In addition she distracted me with home cooked meals and a lot of bunt cakes. I even found some kids nearby that will mow a lawn for books and I haven’t touched the mower in weeks.

Still John ::::sniffle:::: that basement of yours is so beautiful. ::::drying tears:::: It brings back memories. I hope Nick isn’t fretting about my collection. It is still intact and I keep them boxed and bagged so no worries there.

If your wife watches Hoarders—just be prepared is what I’m saying or bye bye Boris Vallejo.

This one was worth the price for that cover alone, if the scene appears in the book or not. I don’t remember ever seeing this in a book store.

As for the hoarder nonsense, if neatly shelved, stored or organized, and kept clean and neat, it’s a library, or collection, not junk and hoarding isn’t an issue. My wife, who makes quilts, has tubs of fabric, I, who read, have many shelves of books. No problem.

> No. You can’t imagine it because nobody could possibly say such a preposterous, hateful, anti-life thing as that.

You speak truth to power, Mr. Hocking! As usual.

I have these powerful words chalked into the sidewalk around my house, as a ward against badthink. 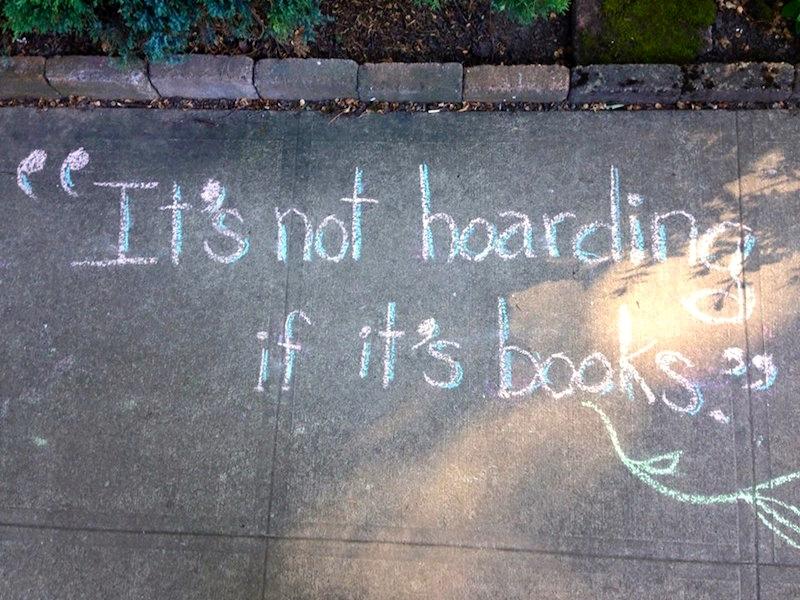 > Still John ::::sniffle:::: that basement of yours is so beautiful. ::::drying tears:::: It brings back memories. I hope
> Nick isn’t fretting about my collection. It is still intact and I keep them boxed and bagged so no worries there.

I’m glad to hear it, Ape. A collection sundered is a crime against our hobby.

> I tip my hat to you, Messrs O’Neill and Hocking.

Thank you, Joe. It’s the modest admiration of our peers that keeps us going.

> This one was worth the price for that cover alone, if the scene appears in the book or not.

I must admit that it’s the Vallejo cover that makes this book memorable. It was relatively early in his career.

> I don’t remember ever seeing this in a book store.

I don’t think I did either. I came across it this year, as part of a small collection of paperback I acquired.

Even the guy who wrote a memoir about spending a year owning only one of each kind of item he had (one shirt, one bowl, one sheet, etc.) couldn’t pare it down to one book. He decided he had one library.

Just don’t trick yourself into calling your collection an investment. Repeat after me: It’s only worth money if you’re willing to sell it.

> It’s only worth money if you’re willing to sell it.

Or if your heirs are willing to sell it. (Gladly and gleefully, in my case.)