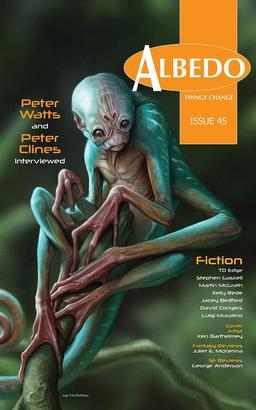 I’ve never tried an issue of Albedo One before. Honestly, I don’t know much about it — I’m not even sure if it is print or digital. I always assumed it was a magazine of hard science fiction (“An albedo… that’s, like, science stuff,”) of peripheral interest at best to Black Gate fans. But then I saw the marvelous cover for Issue 45, with the alien frog dude, and thought, maybe science isn’t so bad.

I wandered over to the website this morning, where I learned lots of interesting things about the magazine, including the fact that it features fantasy and horror — and it’s published in Ireland. Here’s a snippet from the About section.

As Europe’s westernmost outpost, we believe passionately that one of our roles is to bring unique and excellent speculative fiction written and published in other European and World languages to an English readership. To this end we have initiated a program of translations to and from English with our colleagues and partners beyond Ireland… As well as reviews by our regular columnists Juliet E. McKenna and David Conyers, each issue features in-depth home-grown interviews with the most interesting names in the speculative fiction genres…

Albedo One is published between two and three times a year… Issues are available in print and low-cost downloadable PDF format.

All that sounds marvelous to me. Clearly I have neglected this magazine for far too long. Time to correct that, starting with this issue. Thanks, frog dude.

Experience otherworldly love that cannot last, grant a daughter her dying wish on a desolated Mars, journey with an apocalypse survivor whose wife and daughter have been edited from his perception, and squirm at the deprivation behind the scenes of a child pageant.

Albedo One sure celebrates their Tangent Online reviews, too (see the graphic below), and I can’t blame them. Clancy Weeks’ review recommends much of the issue, including stories by Stephen Gaskell, Kelly Rede, Jacey Bedford, and David Conyers. 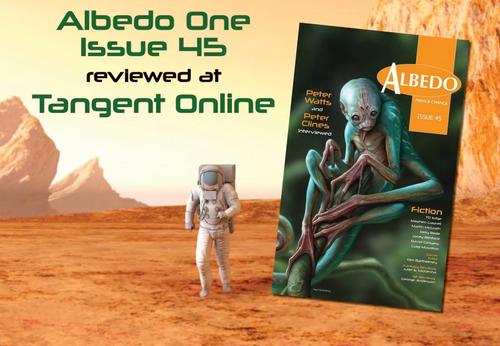 Here’s Clancy on the Conyers tale:

David Conyers, in his story “The Shaping Man,” gives us a look into a near future ravaged by world war fought with biological weapons. The viruses unleashed by both sides have the ability to erase — in real-time — objects or people from our perception. Trent Kinkaid has not seen his wife, Penny, or his daughter, Lily, since he first became infected, even though none of them ever left their home in the desert of Australia. As a husband and father, he is obsessed with protecting his family regardless of whether or not he can see their faces or hear their voices. He can perceive them only as formless shapes in his field of view, and the virus won’t allow even the character of their voices to be heard. Into this tableau Brian Volkmer comes, with knowledge of Trent’s world both without and within his compound. I am reminded of Cormac McCarthy’s The Road with Trent’s need to protect his family, and while I knew where this was headed from the beginning, that did not dampen the horror one bit when this story finally got there. Recommended.

Albedo One is edited by Robert (Bob) Neilson and published by Albedo One Productions/Aeon Press. A four-issue print subscription is €25.00 in Ireland, and €32.00 overseas. Individual issues are €5.95 for print, €4.00 for PDF, and €2.99 in MOBI and EPUB versions ($3.50 in the US). Back issues are available in their online store.

Issue #45 was published in September 2014. It is 153 pages; the cover art by Ken Barthelmey. See complete details on the issue here.

Our mid-June Fantasy Magazine Rack is here. See all of our recent magazine coverage here.