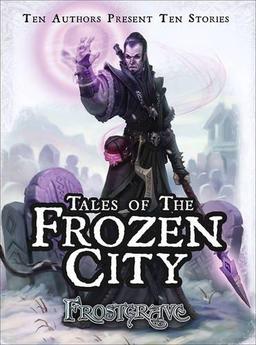 Joseph McCullough is the author of one of the most popular articles in Black Gate history, “The Demarcation of Sword and Sorcery,” which today is considered one of the defining texts on the genre. He’s published fiction in BG and elsewhere, and is currently Project Manager for Osprey Adventures.

Long ago, the great city of Felstad sat at the centre of a magical empire. Its towering spires, labyrinthine catacombs and immense libraries were the wonder of the age, and potions, scrolls and mystical items of all descriptions poured from its workshops. Then, one cataclysmic night, a mistake was made. In some lofty tower or dark chamber, a foolish wizard unleashed a magic too powerful to control. A storm rose up, an epic blizzard that swallowed the city whole, burying it deep and leaving the empire as nothing more than a vast, frozen wasteland. The empire shattered, and the magic of the world faded. As the centuries came and went, Felstad passed from history to legend and on into myth. Only a few wizards, clinging to the last remnants of magical knowledge, still believed that the lost city had ever actually existed. But their faith was rewarded.

After a thousand years, the fell winter has passed. The snows have receded, and Felstad has been uncovered. Its buildings lie in ruins, overrun by undead creatures and magical constructs, the legacy of the empire’s experiments. It is an evil, dangerous place. To the few hardy souls who inhabit the nearby villages, the city has acquired a new name, ‘Frostgrave’, and it is shunned by all right-thinking people. For those who seek power and riches, however, it is an unparalleled opportunity, a deadly maze concealing secrets of knowledge long forgotten…

This new fiction anthology collects ten stories of wizards and adventures as they venture into the ruins of the Frozen City.

Joe’s previous books with Osprey include Steampunk Soldiers and Dragonslayers. He wrote about his role as a Project Manager at Osprey here.

Frostgrave: Tales of the Frozen City will be published by Osprey Publishing on July 20, 2015. It is 48 pages, priced at $8.95 in trade paperback. There is no digital edition. Learn more at the Osprey website.

See all our recent reports on the best in upcoming fantasy here.

I got wind of this through Harold Page. It looks good. I’m interested in the miniatures game as I often play against my nemesis, Bob, in Warmachine. Bob is a tough competitor and some poor soul two weekends ago had the misfortune of meeting my warcaster on the field and I slaughtered him. The guy thought I was a good player and I tried to console him that I go against Bob a lot with a list similar to his so I was well practiced in countering his army. I bought a miniature game from Osprey which was their pirate battles miniature game. It was more of a beer and pretzel kind of game and not one of serious competition. Fun but not competitive. I’m looking forward to Frostgrave.

?? I wasn’t even aware they HAD a pirate miniatures game. I’l have to check it out!

I – of course – had an advance copy of it so I could write for this anthology. It sort of fills the niche that Heroscape once held, but is perhaps also reminiscent of the old Chainmail.

@John—my nemesis in minature wargames, Bob, gets a routine beat down to my Blackbeard crew. He may be tough at Warmachine but he fights like a land lubber on the high seas.

@MH Page—I loved your book on writing and it sparked me to give writing a go again. I also liked your earlier post here and your reference to HEMA. I recently found out that my youngest son is big into that and we plan to meet on the battlefield in a couple of weeks. He learned his lesson with me on paintball and I think he might kill me in MMA (he loves that sport) but I never told him that when I was young I won some fencing tournaments. Heh heh heh. I plan to teach him a thing or two and make him pay for his “dad is getting old” comments.