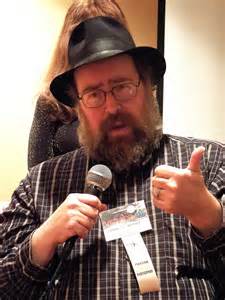 John C. Wright, the author of the Children of Chaos and Count to Eschaton series (among others), recently put up a post on his blog which contains the most sublime encouragement I’ve ever seen offered from one writer to another. I’ll admit that I felt a mist of manly tears come to my eyes while I read through his words.

If you’ve ever written, or considered writing, you owe it to yourself to read his post: “The Brazen Author of the Book of Gold.”

Wright includes some musings on the Muse at the end, but the beating heart of the post is the offset section.

He received a letter from a fan who said that the quality of Wright’s books had made him despair of ever writing anything good enough to be read, and thus put aside his ambitions. Wright responds, in part:

I know you mean it as a compliment, but my prose appeals, and is only meant to appeal, to a narrow audience.

If you are in that audience, I am very grateful.

But I will tell you my version of your story [about the scarf]. I was a bookish child, friendless, unhappy. In my youth, I read a book my David Lindsay.

If an adult read it, he would say that this book was written in an awkward, tin-eared fashion, with a main character who is a cipher without personality, on an adventure that makes no sense. There is no plot to the book: the hero travels through strange landscapes meeting stiff and highly symbolic figures, committing apparently pointless murders.

The book was not well regarded then or now. It sold less than 200 copies in its first printing. The writer Lindsay, who has been largely forgotten, died young in utter poverty of a disease caused by improper dentistry, that is, something that could have been easily prevented.

The book is A Voyage to Arcturus and it is one of the most important books in my life.

It shaped my youthful and hence my lifelong idea of what life was for and what reality was about.

It was magical to me, the very wine of the gods.

And yet, to everyone else, even perhaps to the man who wrote it, it is an incomprehensible, opaque, meandering, pointless book. In the eyes of the world, it is a worthless book.

Now, imagine that you are Lindsay and some child who will not be born for 40 years after your death is the only one who will read and understand and treasure your book — the book you think is lousy — is in my position.

Myself, I have more pity for that child, yet unborn, who will be your greatest fan, than I have for Lindsay, had he burned his computer, and decided not to write.

Do you understand? I cannot write the book that one child needs. You can. 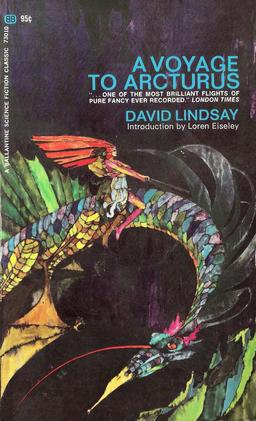 Reading that makes me remember how important The Queen of Attolia by Megan Whalen Turner was to me in my early teens, or how Andre Norton’s Brother to Shadows feels written on my heart to this day, it being the only book I bought a second copy of just to have one to read and one to loan.

It makes me recall how Gene Wolfe’s Long Sun novels seemed (and still seem) written directly to me.

And reading those words make me want to write, in the hope that somewhere, at some time, one of my stories could become someone’s treasured book.

Sean T. M. Stiennon is a writer, martial artist, and doer of mighty deeds who makes his home in Madison, Wisconsin. He has much to learn.

That blog post of his was the same positive vibe that I get when I read his stories. It pains me to see the left wing trolls rage mob against him and saying the worst things. I wish they could go by his philosophy of “I know the art of how to hate the writer and love the writing.” He points to Ayn Rand as being an aethist and an adulterer which goes against his Christian values but he likes her stories. This is something that I think should be everyone’s philosophy and I might have to rethink my boycott of Tor. I wonder how many HP Lovecraft fans know what sort of racist bigoted views that he held or that he once praised Hitler and Mussolini.
What happens instead is speakers for the left blasting Wright’s fiction in the most bigoted and mean spirited ways. They won’t even read his fiction in the Hugo voting because he bears the Castilia House brand and because of his known views. Sandifer painted him to be a dominionist which is absurd as his words which he says in his life and his actions are just the opposite. Sandifer wants to make him out to be a wild eyed Christian fanatic out to create the equivalent of an ISIS caliphate. The more they paint him out to be an inhuman terrorist the more frenzied the mob gets.

Considering how much fire he has received in recent history I find him to be resilient and consistent. I think Sandifer and those in his blind rage mob are the real monsters and the true fascists. I can see nothing that fuels their rage other than their bigotry. I saw a blog, I think it was Scalzi’s where I followed Wright after the initial Hugo flare up. He was viciously slandered and excoriated and then invited to debate. When Wright showed up his posts were deleted and he was still savaged. They just wanted to ambush him, kick him, and dance and claim victory. What cowards! I witness this with my own eyes and I was asked to verify comments made but they disappeared.

One of my favorite authors is Robert E Howard. His stories actually changed my life. Howard carried with him the racial prejudices that were common for his time. Charles Saunders of Imaro fame is also one of my favorites and he was a Howard fan and reader too. He seemed to be able to set aside and do what John C. Wright does. John O’Niell isn’t fond of what Orson Scott Card says about homosexuality yet I see that he posts reviews of Clarkesworld here on Blackgate despite his feelings toward the writer’s views.

This is a very brave post. I’m glad someone stands up for him. I might be too political for this segment so feel free to tell John to delete my post. I don’t want to unintentionally hijack it if this is not the direction you want to go. I’ll repost my positive opinion of what he wrote here and filter out the politics of the Hugos if that is more suitable and take your lead.

> John O’Niell isn’t fond of what Orson Scott Card says about homosexuality yet I see that he
> posts reviews of Clarkesworld here on Blackgate despite his feelings toward the writer’s views.

Clarkesworld is edited by Neil Clarke, who isn’t associated with Orson Scott Card, as far as I know.

Thanks for sharing this, Sean. It’s good to be reminded of how much an impression titles each of us hold dear impacted our lives. Quite compelling words from Wright.

There are many things that I’ve stumbled upon about you John. I understand that you were on the creation team of the Internet Explorer. That creation and others like it paved the way for my family’s wealth. My wife and two sons have made career starts from this software invention.

You had the pioneer foresight of the emagazine and you sought to bring that out in many corporations who did not have this vision. Now emagazines and publications have exploded onto commercial scenes and I wish that Black Gate was still in open operation to publication. I think it is marvelous that you promote those emagazines here at Black Gate.

I did not know at the time that the Rabid Puppies even existed when I voted for Black Gate for a Hugo nomination. I am saddened to see that they tainted your nomination and wasted my vote. I was encouraged that you held on as bravely as you could before bowing out of the nomination only to find that it was too late to be removed from the vote. Only for deep respect for you and the volunteers here will I not vote for you in the finals and honor your wishes not to be affirmed. I think hands down Black Gate is the strongest vote in your category.

Nitpicking a bit … A VOYAGE TO ARCTURUS is truly a famous weird SFish novel … yes, many describe it as “incomprehensible, opaque, meandering, pointless”, but it continues to attract a (small) readership. It’s by no means plausibly “worthless” in the eyes of the world.

Agreed. The book is highly regarded by many, even today.