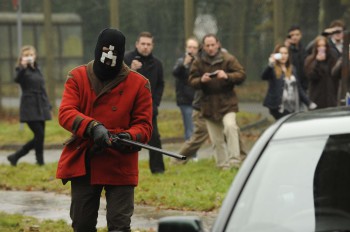 I don’t watch television. Or not, let’s say, broadcast television. Since the first X-Files video tape showed up, I have, instead, binge-watched episodic TV in irregular, spasmodic doses via VHS, DVD, and Netflix. I watch with my wife, and we’re not (to the shows) faithful: if a particular series bores us, we move on. Even Breaking Bad, after three seasons, felt like a joke gone on too long.

A British show made for Channel Four, Black Mirror is the brainchild of one Charlie Brooker — whom you haven’t heard of, either. The series aired in the UK from 2011 through 2013. Based on that time span, you’d think it was a fabulous success spanning dozens of episodes. Only half true. Black Mirror consists of six shows total (plus a 2014 “Christmas Special,” which I have yet to see), and each is self-contained, a hermetic “What If?” often compared to Rod Serling’s Twilight Zone. The reference is not especially apt, but like Velcro and old chewing gum, it’s a label that seems to have stuck. 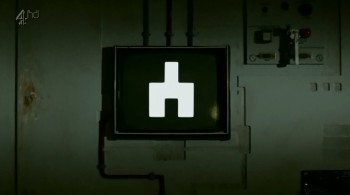 Without a hint of Serling’s reassuring presence as emcee and narrator, Black Mirror fixates on near-future scenarios dominated by hand-held or wall-mounted screens. (Interactive smart screens are the “black mirror” to which the title refers.) What elevates each forty-six minute installment above and beyond the often cynical offerings of other shows, films, etc., is the abiding commitment of the Black Mirror’s characters to seek out love and companionship at all costs. The stakes are high because these characters (unlike most of those around them) have yet to give up. It’s a simple hook, but mighty. Love, even in defeat, conquers all.

But don’t be fooled into thinking Black Mirror is either romantic twaddle or in any way an uplifting Hallmark card. One or two storylines allow ambiguous, hopeful endings, but by and large, the show functions as a punch to the kidneys. Wake up, it screams! Don’t let our world become like this! 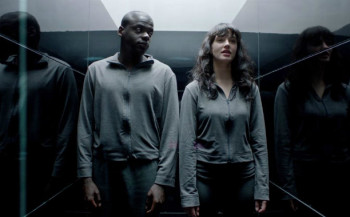 The first episode, “National Anthem,” is the only one without an evident sci-fi or speculative component. The set-up is deceptively simple: a sitting British Prime Minister is blackmailed by a hostage taker not with the usual demands of prisoner releases or troop withdrawals, but with an ultimatum that he participate in something very physical and unseemly­­ — on live broadcast television. “National Anthem” tests the limits of broadcast decency (its own, for example) while ferreting out important questions posed by “viral culture” and the louche, amoral limits of art and artists.

“Fifteen Million Merits” puts us in an upscale worker-drone world where failing to watch live-streamed video feeds costs you demerits –– and without merits, you can’t ever get out. Responding to a feature in a British newspaper, one reader rated it “the best hour of television I’ve ever seen.”

“The Entire History Of You,” charts the disaster our most intimate relationships would surely become if we had the power to re-watch not just selected (videotaped, for example) past events but all personal interactions, including those shameful mistakes never meant to be anything but private.

That’s it for season one. Trust me, my snippet (spoiler-free) encapsulations in no way do the actual episodes justice. 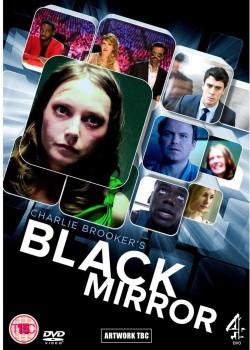 Why? Because Black Mirror employs top-notch, under-the-radar actors, superlative set designs, and truly superior camera work to create genuinely unsettling drama. The scripts, even when they make minor missteps, are marvels of efficiency. Hollywood take note: this is what you can pack into a short time span, and these are the thumps of my heart that you’re hearing as I re-live my favorite moments.

In the first season, male characters dominate. In the second season, women take center stage for the first two shows (“Be Right Back” and the pulse-pounding “White Bear”), relinquishing it only partially in “The Waldo Moment.”

“Be Right Back” is an emotional roller coaster. Just how badly would you want your dead spouse back? This combines the tears of Truly, Madly, Deeply with W.W. Jacobs and the cool horror of A.I., all filtered through the lens of smart phones and apps. It’s even better on a second viewing, with a script that ought to be used to teach master classes on how to set endless, effortless hooks.

“White Bear” is the rock-n-roll what-the-hell-is-going-on episode, and if on-line discussions are any guide, it seems to polarize viewers. Emily Nussbaum, of The New Yorker, writes “it’s still giving me nightmares.” (Her complete review is HERE.) Others found it pointless, and harrowing for the sake of harrow (if such a thing is possible). Me, I thought it did a sly job of intersecting the criminal justice “system” and “popular” entertainment. Despite a couple of faulty script details (easily solved — so why weren’t they solved?), it’s a pulse-pounder.

The series concludes with “The Waldo Moment.” No, not Where’s Waldo? This Waldo is, according to its animator (a foul-mouthed comedian), “a big blue bear.” And this cartoon bear, bug-eyed and vulgar, could very well derail everything we know about electoral politics. “The Waldo Moment” gives Aaron Sorkin a run for his money in terms of both pace and barbed dialogue, although it heads in the direction of, among other things, Blade Runner by the end. If it errs somewhat on the side of Socratic method, it prompts a debate for which I’m a sucker, and while I was cheering for both hero and heroine to find a way through, I completely support the episode’s stark, glitzy climax. 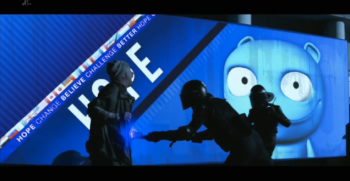 Yes, folks, live from Black Gate’s vast Indiana compound, it’s time for BREAKING NEWS: Black Mirror has jumped the Atlantic (and probably the shark). New episodes have been commissioned by Endemol, a Dutch corporation, for the U.S. market. They expect to air the results just around the corner, in 2016.

For more of my thoughts on television science fiction, may I refer you to “The Scariest Hour In TV History,” which focused on that glorious clunker, Space: 1999.

But trust me, Black Mirror is better. Far better.

You’ll be glad you did.

“Fifteen Million Merits” blew me away. SF is so rich a genre, and what we get on the screen – large or small – is generally so dumbed-down and devoid of all but visual interest as to be actually insulting (Prometheus!), but “Merits” felt like the best written SF, with a dark, coherent vision and cutting intelligence worthy of Tiptree or Ballard.

Thomas, I think Alice Sheldon would have LOVED this show. Thanks for weighing in, and so glad you’ve already had the BLACK MIRROR experience!

Black mirrors are traditional scrying tools. You find them in folk magic, in New Agey practice, and possibly (I want to check this claim out further) ancient references to Hecate veneration.

I’m not familiar with the show, but it’s definitely in their favor that they’ve likened embedded this reference to occult technique in their characters’ language about ubiquitous technological surveillance.

I’ll have to check this one out.

I want to watch more of these—but there is *so* much astonishingly good TV these days. So far, the only episode I’ve seen was “Be Right Back,” and I must admit I put that near the top of my “to watch” queue because I’ve had a long-standing love of Hayley Atwell since seeing her in “Cassandra’s Dream” and “How About You.” (Uh, let’s just say it’s her acting.) I think my wife was only able to convince me to watch “The Pillars of the Earth” miniseries (she’d read the book) because I knew Hayley was in it.

So was I pleased that Hayley was added to the Marvel Cinematic Universe? Yes, yes I was.

Sarah – As always, you are two steps ahead. Or at least two steps ahead of me! But I have no doubt that Mr. Brooker knew exactly what the various older meanings of the term would reference. No doubt at all. I’ll be very curious to hear what you think of the series.

Allen – Yes, TV is enjoying a Golden Age. As for Ms. Atwell, I’ll say this for sure: she’s a terrific actor. “Pillars” was lucky to have her.

I like BBC America’s “Orphan Black”. That is my pick for the Hugos this year. The lead actress is so distinct at her characters that you could turn off the screen and recognize who is talking in a conversation just by her voice. She is THAT good.

I’m looking forward to this series. I like to marathon a series and this looks like it will be a winner. Your selling point markrigney was your reference to the Twilight Zone. That is a bold statement. I’ll give it a look.

Wild Ape – Let us know what you think! And do bear in mind that while I’ve seen many references comparing BLACK MIRROR to the TWILIGHT ZONE, my own take is that it’s not really a very accurate comparison. But, human beings seem to like referents, so…

Haven’t seen ORPHAN BLACK. But it’s on the list!

I just watched the first two episodes of season 1–very impressive and compelling storytelling! I look forward to seeing the rest of the episodes.

However, not as family oriented as Twilight Zone–more “adult.”

I love that Black Mirror actually has something to say about modern society and the use of technology. Taking it on with a cynical eye, it makes you *think* and that seems to be increasingly rare. I can’t recommend it enough.
Bloody disturbing at times though.