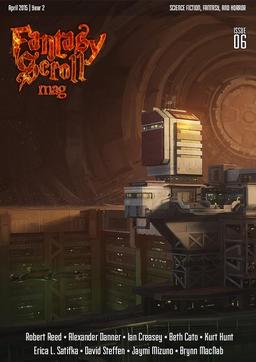 The sixth issue of the online-only Fantasy Scroll Magazine is now available.

Fantasy Scroll was launched with a Kickstarter campaign on April 23, 2014. It raised enough to fund a full year (four issues); all four issues were released last year, as promised. Since then it’s been continuing nicely under its own steam. It has supported itself by selling merchandise, launching a mobile app, soliciting donations — and through a Starlight Patrol of enthusiastic backers and supporters at Patreon who help keep the magazine going.

The previous issue was cover-dated February 2015; this one is April 2015. It seems to have switched to bi-monthly publication, which is great news.

Issue #6 includes nine short stories from Robert Reed, Ian Creasy, Beth Cato, and others, plus interviews and a handful of book and film reviews.

In his editorial, Iulian Ionescu reports that the magazine is experimenting with publishing longer stories (novelettes) for the first time.

I’m happy to present you with what I believe might be our longest issue so far. No, it’s not a double issue, it’s a regular issue, but the first story in the fiction section is actually a novelette. This is something new that we are trying out (we have another novelette scheduled for Issue #7). Does this mean that we are now accepting longer pieces? Not exactly. The novelettes will be published exclusively on a request-only basis, and at this point it’s not entirely sure if we will continue with them after Issue #7.

Fantasy Scroll Magazine is edited by Iulian Ionescu, Frederick Doot, and Alexandra Zamorski, and published bi-monthly in Mobi, epub, and PDF format; issues are also for sale through Amazon, B&N, Smashwords, Kobo, Weightless Books, and Google. Individual issues are $2.99, a 4-issue subscription is only $9.99. Learn more at their website. The cover this issue is “Mars Station” by Franklin Chan.

We last covered the magazine with issue 5.

See our April Fantasy Magazine Rack here, and all of our recent magazine coverage here.

Thanks for bringing this one to our attention! I just subscribed and sent them a fiction submission.