H. Beam Piper is one of my favorite Twentieth Century writers. He died a few months after I was born, on November 4, 1964, but his books are still in print today in handsome omnibus collections from his long-time publisher, Ace Books.  And if you’re willing to hunt for a few vintage paperbacks (and why wouldn’t you?), you can also find some terrific collections of his earlier novels and stories.

Let’s start with the classic series for which Piper is most remembered today: The Fuzzy novels (also published as The Fuzzy Papers), collected in the omnibus volume The Complete Fuzzy. An enduring favorite among Golden Age SF fans, the series began with Little Fuzzy (1962) and The Other Human Race (1964; also called Fuzzy Sapiens), and continued in Fuzzies and Other People, which was found among Piper’s papers and published two decades after his death, in 1984. 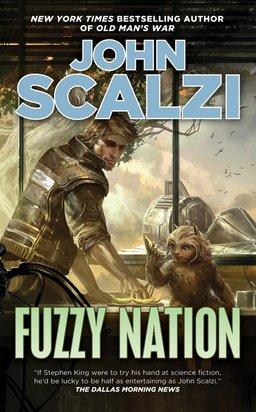 Here’s what I said about the series in my 2013 Vintage Treasures piece on the Science Fiction Book Club edition of The Fuzzy Papers:

Piper’s novels follow the adventures of down-on-his-luck space prospector Jack Holloway, who’s been exploring the planet Zarathrustra — a Class III uninhabited world run for profit by mining magnate Victor Grego. But everything changes when Holloway discovers the Fuzzies, curious little humanoids that almost seem to have the power to reason.

William Tuning was first with Fuzzy Bones in 1981, and Ardath Mayhar followed with Golden Dream: A Fuzzy Odyssey in 1982. Fuzzy Ergo Sum by Wolfgang Diehr appeared in March, 2011, and you may have seen the most famous example, John Scalzi’s Little Fuzzy re-telling titled Fuzzy Nation, published in May of the same year.

The entire series was kept in print for many years by Ace Books, who published the trilogy with a set of matching covers by Michael Whelan (see below).

The Complete Fuzzy was published by Ace Books on December 1, 1998. It is 454 pages, priced at $29 in trade paperback. The cover is by Michael Whelan. There is no digital edition, but the trade paperback is still in print.

A few years after The Complete Fuzzy was released, Ace bundled together two other books, Piper’s 1981 short story collection Paratime, and the complete novel Lord Kalvan of Otherwhen (1965) into a matching omnibus collection, The Complete Paratime. Here’s the blurb from the back of the book.

From H. Beam Piper, the creator of the Terrohuman Future History and the bestselling Fuzzy novels, come the parallel worlds of Paratime — collected for the first time in one volume.

Infinite worlds allowed for infinite evil — unless the doorway to those worlds was most carefully guarded. The Paratime Police are an elite force of men and women charged with defending a million unsuspecting Earths from their more developed—and more ruthless—neighbors in parallel continua. From the original Paratime, which introduced the unceasing struggles of the time-traveling heroes, to Lord Kalvan of Otherwhen, the last Paratime story of a state trooper’s conquest of an alternate Earth… The Complete Paratime is a grand science fiction experience.

Remember that “Terrohuman Future History” — we’re going to come back to that in just a second.

The Complete Paratime was published by Ace Books on March 1, 2001. It is 424 pages, priced at $27 in trade paperback. The cover is by Dave Dorman. There is no digital edition, but it is still in print. It collects the two books below; both with covers by Michael Whelan. 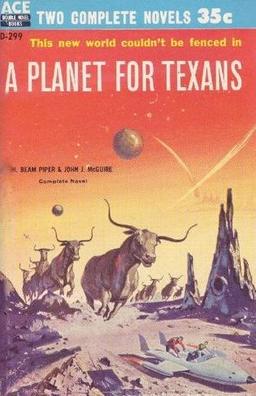 Finally, as long as we’re looking at omnibus collections of H. Beam Piper, I can’t resist showing you his earlier omnibus volumes from Ace Books.

Federation collects five short stories in Piper’s “Terrohuman Future History,” along with an introduction by Jerry Pournelle, “Piper’s Foundation.” One of the stories (the novella “When in the Course—”, a re-written Lord Kalvan of Otherwhen tale) is new, the rest appeared in Astounding/Analog and Galaxy magazine between 1957 and 1962.

Federation was published by Ace Books in February 1981, with a cover by Michael Whelan (note the small Fuzzy peeking out from behind the legs of the explorer on the cover, below).

The sequel, Empire, collects another five short stories and novellas written between 1954 and 1962, which follow the collapse of the Federation and the rise of the Empire. It was published by Ace in May 1981, with a cover by Michael Whelan.

Lone Star Planet was originally published as A Planet for Texans in 1958. It was written with John J. McGuire, and appeared as an Ace Double — with an absolutely marvelous cover, showing an intrepid explorer scrambling into his space roadster as a herd of giant alien cattle stampede towards him. This is what 1950s science fiction was all about. If you’re a serious collector, consider finding a copy of this one an advanced assignment.

A Planet for Texans was paired with Andrew Norton’s classic novel Star Born when it first appeared as an Ace Double. The cover (see right — click for a bigger version) was by the great Ed Emshwiller.

Four-Day Planet/Lone Star Planet was published by Ace Books in April 1979. It is 340 pages, with a cover by Michael Whelan.

Never read these books, but the first thing that springs to mind is the ewoks: maybe these creatures had their origins in the fuzzy sapiens?

Yeah, the similarities have been noted before. Lucas has said in the past that Endor, home of the Ewoks, was originally intended to be the Wookie home planet, but that didn’t work out for one reason or another, and so he “cut the wookies in half” and created Ewoks.

Still, the Fuzzy connection seems a likely source of inspiration to me, even if it was subconscious.

How about The Cosmic Computer, another Ace paperback with a Whelan cover, that was an expansion on one of his short stories.

Most of his stories are available for free electronically. The copyright lapsed due to some mess up with his death and estate.

> How about The Cosmic Computer, another Ace paperback with a Whelan cover, that was an expansion on one of his short stories.

A great old story! But it’s not in any of the omnibus collections I could find, sadly…

I loved the covers on THE COSMIC COMPUTER. I should do a Vintage Treasures post on it.