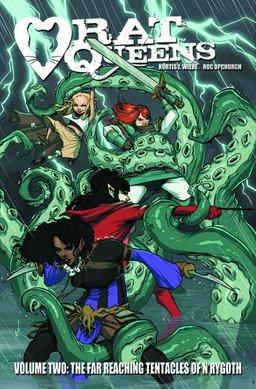 Rat Queens, Volume 1 was nominated for a 2015 Hugo — and all on its own, too, without having to rely on a slate or anything. (I wonder if we’ll have to put that qualifier on all future Hugo nominees.)

The Rat Queens is a darkly comedic “sass-and-sorcery” graphic novel, featuring a pack of booze-guzzling, death-dealing battle maidens-for-hire in the business of killing all god’s creatures for profit. It follow the adventures of four Dungeons and Dragons archetypes, Hannah the Rockabilly Elven Mage, Violet the Hipster Dwarven Fighter, Dee the Atheist Human Cleric and Betty the Hippy Smidgen Thief, as they hack their way through dungeons and strangers things, in this modern spin on an old school genre.

A brand-new, booze-soaked tale of the Rat Queens reveals a growing menace within the very walls of Palisade. And while Dee may have run from her past, the bloated, blood-feasting sky god N’rygoth never really lets his children stray too far. Collects issues #6-10 of the smash-hit series, plus extras.

Volume 1, Sass & Sorcery, was released on April 8, 2014, and is still available — at the low introductory price of $9.99. It’s definitely the best starting place if you’re not familiar with the series. I bought it last year, and it was quickly snatched up by all the comic-reading bipeds in my house.

Rat Queens Volume 2: The Far Reaching Tentacles of N’rygoth was written by Kurtis J. Wiebe and illustrated by Roc Upchurch and Stjepan Sejic. It will be published by Image Comics on May 19, 2015. It is 136 pages in full color, priced at $14.99. There is no digital edition.

Volume 1 was a lot of fun; I’m really looking forward to V2.

I changed my vote after reading this. This is my pick for my first and probably last Hugo award. I got the book in from Amazon and it was a fun ride from start to finish. I’ve seen the others they fell flat to this one.

I’m pretty sure there will be a digital edition, too. After all, all the individual issues + Vol. 1 are on Comixology. Really liking it, with Vol. 1. Sass and Sorcery became my most favourite sub-genre.

> I’m pretty sure there will be a digital edition, too. After all, all the individual issues + Vol. 1 are on Comixology.

Yeah, I couldn’t understand the lack of a digital edition. Perhaps it’s being sold exclusively though some other outlet, rather than Amazon and B&N?

> Sass and Sorcery became my most favourite sub-genre.

It’s a tiny sub-genre at the moment. But here’s hoping it grows!

Yeah, I just want to point out that my selection is build upon facts and qualities of comic reading that I applied to all the works done. I voted for the Sad Puppy candidate but I’m not above shifting my vote during the finals. It is a very feminist piece but so what–it is a fine read, the storyboarding is solid, the writing is captivating and the art work is so good that the artist brings out with single panels more world building than any other nominee. The panel of the Four Dave’s is a good example of what I mean. The criticism of the Sad Puppy supporters is that we can’t recognize good fiction when it is in opposition to some core beliefs. I guess that is just how wife beating white supremacists are expected to roll. Well, this Sad Puppy gives it Puppy paw jazz fingers applause.