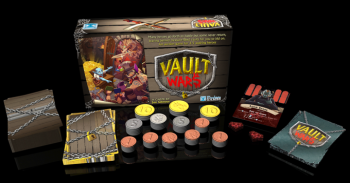 Floodgate Games has a successful track record of Kickstarter projects, starting with their fun time-travel technology-creation game Legacy: Gears of Time. After Legacy and its expansion, Floodgate Games created Epic Resort (Amazon), an unorthodox game set within a traditional fantasy world. In Epic Resort, you run a resort vacation spot where adventurers spend their time to recuperate and heal between adventures. You accumulate gold and hire workers, and then win with victory points gained by building attractions at your resort and having heroes heal up to full health. The twist of the game is that occasionally monsters attack your resort, and the heroes must stop them, which can result in new injuries or even death.

Something of a thematic (and artistic) sequel to Epic Resort, Floodgate Games’ new Kickstarter Vault Wars  asks what happens when heroes die and their vaults of equipment go up for auction, so that other heroes can gain the benefits of a fallen heroes’ previous efforts. You can find out more about the game and its related stretch goals on Kickstarter, but one of the best ways to get a feel for the game (if you have about a half hour) is by watching this video of a walkthrough play of the game. It features a lot of strategic choices and, as it mimics an auction, is built around the idea of bidding and bluffing. One of the stretch goals that’s coming up is a Worker Expansion, which allows players to hire workers that give special one-time bonuses within the game.

The Kickstarter project has passed its funding goal of $10,000, and the opportunity to back the project ends on March 27. The game is slated for delivery in August 2015. Kickstarting price for the basic game is $20, while $45 will get you a deluxe edition with metal coins. Higher cost tiers include copies of Epic Resort and Legacy: Gears of Time, for those who are interested in those games as well.