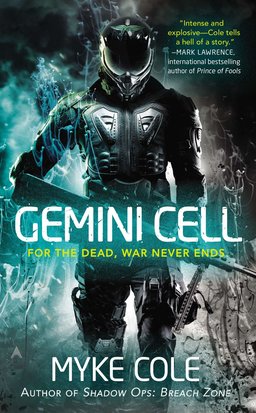 Myle Cole carved out a unique niche with his popular Shadow Ops novels, ultra-realistic military SF crossed with superheroes. Along the way he picked up a reputation for telling intricate, fast-action stories with rich characters.

So I was very intrigued to receive a copy of his newest novel today. The first in a Shadow Ops prequel series, Gemini Cell is set in the early days of the Great Reawakening, when magic first returns to the world and order begins to unravel. Featuring a Navy SEAL forcibly returned to duty from beyond the grave, Gemini Cell looks like another epic adventure as only Myke Cole can tell.

US Navy SEAL Jim Schweitzer is a consummate professional, a fierce warrior, and a hard man to kill. But when he sees something he was never meant to see on a covert mission gone bad, he finds himself — and his family — in the crosshairs. Nothing means more to Jim than protecting his loved ones, but when the enemy brings the battle to his front door, he is overwhelmed and taken down.

That should be the end of the story. But Jim is raised from the dead by a sorcerer and recruited by a top secret unit dabbling in the occult, known only as the Gemini Cell. With powers he doesn’t understand, Jim is called back to duty — as the ultimate warrior. As he wrestles with a literal inner demon, Jim realizes his new superiors are determined to use him for their own ends and keep him in the dark — especially about the fates of his wife and son…

Gemini Cell will be published on January 27 by Ace Books. It is 366 pages, priced at $7.99 in paperback and $6.99 for the digital edition. The cover is by Larry Rostant.