Anyone else out there grow up immersed in the adventures of those Real American Heroes, the Joes? Back in the early ’80s, via the Larry-Hama penned Marvel comic, the Hasbro toys, and the television cartoon, they were a big part of my landscape.

There was one member of the Joe team who, if he were real, might be reading Black Gate today. Which G.I. Joe team member read science fiction and comic books? Click on the “READ MORE” tab for the answer… 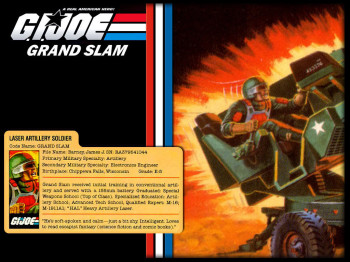 The answer is Grand Slam, the Laser Artillery Soldier. According to the note on his File Card:

Sounds like he’d be an interesting Joe to hang out with. And he got to shoot laser cannons.

If you’re feeling nostalgic now for your old Grand Slam action figure (1982), he typically fetches around $15 – 20 on eBay in good condition with his helmet/visor and file card. If you want  the H.A.L. (Heavy Artillery Laser) cannon he originally came packaged with, you can find that for another $15 – 20. You want ’em both together in the original box? Be prepared to fork over triple digits.

I was in the Army from 1982 to 85, and I don’t see anyone I knew in that poster. I must have been stationed at the wrong post.

That’s because they were always off battling COBRA, and of course they had their own secret headquarters — the “Pit.”

btw, in all seriousness, thank you for your service. There really is a world of difference between the pre-teen comic-fantasy versions of the Army and the real deal.

One cannot fail to note that since the Laser Artillery Soldier read escapist literature, this is just another piece of evidence showing that SF&F fans are all actually violent people!

I think it’s kinda funny that a guy who reads “escapist fantasy” has a day job in which he fires lasers at COBRA — arch-nemesis organization always trying (and failing) to take over the world. He fights nefarious villains like Cobra Commander, Destro, and Zartan alongside characters like Snake-Eyes.

Not sure what constitutes escapist fantasy in escapist fantasy, but I just want to point out that when I was in Iraq with the infantry in 2005, when guys were off mission lots of them played “Call of Duty”. Seriously.
Myself, I played lots of Halo 2, which is “escapist” in that it’s aliens shooting at you, not other humans.

I wonder how many active duty guys back in the day read G.I. Joe comics or, before that, Sgt. Rock etc. — enjoying the escapism of the good guys always winning (and hardly ever dying — not the main characters, anyway)? In a sense it would be similar, I suppose, to how readers of romance novels recognize that the wish-fulfillment way in which everything works out in a Harlequin is not a real reflection of the reality they know.

I should note that Joe writer Larry Hama does have a military background, and did try to draw on that to inform some realism into the Joe comics — constricted, of course, by the fact that he was writing for kids in order to sell toys.