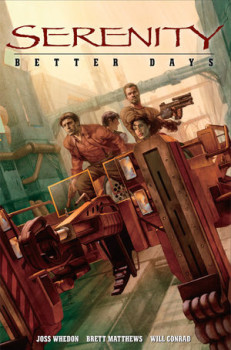 Next week will mark the release of the hardcover collection of the Serenity: Leaves on the Wind (Amazon) limited series, which marks the first official story set in the post-film Serenity ‘Verse.

However, this is actually the fourth collection of Serenity comics. I previously reviewed the Serenity: Those Left Behind comic story, which was published before the release of the film Serenity. Two additional stories have been released as comics to tell further adventures of the Serenity crew since the film came out, but these were telling stories that took place before the film.

The second limited series to get collected together, Better Days tells the story of a mission that goes surprisingly right for the Serenity crew. It sets them on a path where they all might be able to live their wildest dreams. More importantly, though, the series is set before the events of Serenity – so the series includes characters who don’t make it out of the film alive. We get yet another glimpse of some of our favorite characters all together.

Each character gets some good moments in this series, including a priceless scene where Jayne is joyously recognized as the hero of Canton. (Actually, Jayne gets a few great moments. There’s also a scene where he asks Simon to teach him some of the finer points of engaging a companion. Plus Adam Baldwin wrote the Introduction.)

Unlike Those Left Behind, this series focuses less on secondary characters from the show. The bad guys and contacts are all new, but given that this is a 3-issue limited series, that also means there just isn’t a lot of time for them to be developed. By necessity, the villains are a bit cardboard, but still interesting.

The second edition of Better Days includes some extra short stories and one-shot comics beyond the limited series: “The Other Half,” “Downtime,” and “Float Out.” If you want to buy it, be sure you aren’t getting a copy of the first edition, which lacks these extras.

One of the biggest mysteries out of the television series was the backstory of Shepherd Book, played by Ron Glass. The story of his background was finally told. Not in a limited series, but in a slim volume written by Zach Whedon, based on an outline provided by his brother Joss.

Of the Serenity comics, this is simultaneously the most significant and the least fulfilling. First, the reason it’s significant:

It reveals the full background of Shepherd Book, from childhood until the film Serenity, with all the major turning points in his life. This follows a backward storytelling model, similar to the film Memento, where the scenes take place in reverse order, and as you see earlier scenes it changes the way you interpret the scenes that come later.

First, it’s very short. The comic itself comes in at 48 pages, but it spans a period of nearly 50 years. By necessity, each scene is very brief. There’s not much depth within the story itself, so the emotional punch of the series comes from thinking about Shepherd Book from the series in light of this backstory. If you were just given this book and read it, it would be hard to care at all about the story told within its pages, despite some interesting plot twists and the clever storytelling style.

More importantly from my standpoint, though, is that the backstory doesn’t quite fit exactly with what is known about Book’s background from the series. It doesn’t answer all of the questions that I would like to have answered.

One of the most significant clues about his background comes from the episode “Bushwacked,” where Book provides his identification credentials and is immediately deferred to by Alliance officer Commander Harken. Prior to The Shepherd’s Tale, many fans (including yours truly) assumed that Book had once been an Alliance Operative, like the one who appears in the Serenity film. Though we don’t have details, the clear implication of “Bushwacked” is that Book’s background has some strong tie into the Alliance–and this is definitely part of the backstory presented in the comic.

The problem, though, is that his ties to the Alliance do not end well. Though I suppose the argument could be made that he is technically a retired Alliance officer himself, I would expect a very different reaction from an Alliance officer who stumbled upon him. Harken’s deferential reaction in “Bushwacked” seems completely unjustified.

Overall, The Shepherd’s Tale would have been much improved by a little more length that would have granted Zack Whedon the opportunity to give us a feel for the character and why he acted the way he did. A scene set in the middle of “Bushwacked,” for example, where he and Harken had a brief exchange to flesh out why Harken reacted the way he did, would have been welcome. Each other scene could have used an extra two or three pages as a welcome addition, so we could have really seen Book in these other situations, understood why he made the choices that he did. I understand that comics are expensive to produce, but I think the extra space would have taken it from a fun addition to the canon to an essential story that was crucial to read in its own right.

But that is probably asking for too much. Given how Firefly ended, I suppose that fans should feel lucky that we get even this explanation of Book’s mysterious origins. Though it may not be the most satisfying comic, those who loved Book will treasure the ability to understand how Book fits into the universe, the forces that made him who he became, and why he decided that a crew of headstrong outsiders, thieves, and rebels might be worth spending some time with.

And we do have that new series coming out in hardcover … which I’ll take a look at next week.