Normally, I do my darndest to avoid topics that aren’t entertaining, at least on some level. I mean, anyone who has ever dropped by the Black Gate headquarters knows we’re nothing around here if not fun. In fact, I’ve heard tell that somewhere in the fine print of the Black Gate bylaws, our leader John O has expressly forbade the broaching of subjects such as politics, religion, or the addictive properties of Robotech.

Then again, you need only be a regular reader here to know anything with the faintest odor of a “rule” amounts to an open invitation to take copious liberties – just ask serial violator Scott “Art” Taylor.

Which is why when I got wind of this little gem, I literally had no choice but to share.

You may have already seen it elsewhere – since it was posted on Youtube November 9th, it has received over 5 million hits. It was clearly filmed at some sort of convention (not the sort Goth Chick News would be invited to cover) and the presenter was an exhibitor who was offering a “show special” for $10. What that special actually was is kind of haunting me in light of the presenters’ subject matter.

There really isn’t anything more to say in way of introduction, mainly because I still remain a bit speechless. So go ahead and watch… 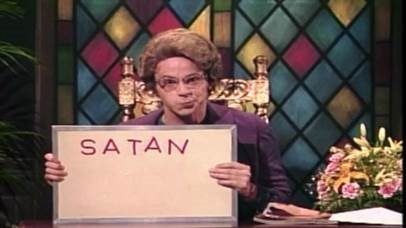 So there you have it – definitive proof that Satan is marketing his own special brand of concentrated evil in the form of Monster Energy Drinks. No wonder they make me feel so special, particularly when mixed with Satan’s other elixir – vodka.

Frankly speaking, I spend my “day job” working with marketing people and trying to picture that crowd utilizing Hebrew text and witchcraft symbolism, or even knowing where to find some is a stretch of my imagination.

Note: It was easy enough to check out the Monster Beverage Company’s press releases and annual reports, since they are a public company. While MBC did enter into a “strategic partnership” with Coke in August of this year, I did not find Satan anywhere on the board of directors or among the senior management staff.

So what do you think – about any of this? Post a comment or drop a line to sue@blackgate.com.

This reminds me of rumors of the band name KISS standing for Kids in Satan’s Service.

Follow up: I reached out to Monster Beverage Corporation’s PR department to see if they had any response to the viral nature of the Church Lady’s video.

The response I got is probably along the lines of what Gene Simmons thought of “Kids In Satan’s Service.”

Oh and Art – you and your serial violations are welcome in the underground offices of Goth Chick News at any time. As long as you keep bringing the lattes and adult beverages.