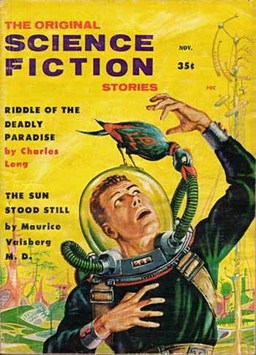 Recently, our esteemed editor John O’Neill blogged about having bought a set of copies of The Original Science Fiction Stories… so it occurred to me that a Retro-Review of a couple of those issues might be interesting. And here it is — something I wrote a few years ago, slightly polished.

Perhaps a long article about Robert A. W. Lowndes’s editorial career would be interesting. His career was rather odd. Off and on for some two decades, he edited two magazines in various combinations: Future, and Science Fiction Stories. For a time, they were the same magazine, called Future Combined With Science Fiction Stories.

Actually, for a couple of different times, they were the same magazine under that title. Charles Hornig was editor for the first few issues of both magazines, from 1939-1941, then Lowndes took over and, as far as I can tell, he was the only editor until the magazines finally limped to an end in 1960.

There were two main phases of publishing these titles: from 1939 through 1943, then from 1950 through 1960. I don’t think there is another example of a single editor being associated, for so long, through so many title changes and hiatuses, with the same publications. He apparently never had much of a budget to work with, either. The publisher, I suppose throughout these magazines’ history, was Columbia Publications. (In the 60s, Lowndes edited one more magazine, the Magazine of Horror.)

I’ve previously covered an issue of Future Combined With Science Fiction Stories, (elswhere … perhaps I’ll resurrect it here sometime). At hand today are two very late issues of Science Fiction Stories, both among those billed as The Original Science Fiction Stories. The first magazine I have is actually one of the UK editions, published by Strato Publications, Ltd. It is billed as No. 7, with no date. The contents are exactly those of the November 1958 American edition (Volume 9, #4). I have no idea exactly when this issue was printed in the UK.

The cover is by Emshwiller. Interior illustrations are by Freas and Emshwiller and a couple from people I don’t recognize. The features are a short quiz about the nationalities of famous physicists, an editorial by Lowndes about the difficulty of making a living as an SF writer, and a letter column combined with a reader rating summary. The letter column is a bit odd — it consists first of a reminiscence by Lowndes of the recently deceased Cyril Kornbluth, and a very sarcastic response by Isaac Asimov to (I assume) a previous letter by an idiot who accused those who believe in time dilation and other relativistic effects (including Asimov, who must have had an article describing relativity) of being “possibly NKVD men sent directly by the Kremlin.”

There are four stories included. According to Miller/Contento, “The Sun Stood Still”, by Maurice Vaisberg, M.D., is a novella, but I don’t agree: my word count is only 13300. Another novelette is Charles Long’s “Riddle of the Deadly Paradise” (12000 words). The two short stories are George Osborne’s “The Isolationists” (3300 words), and Diane Detzer’s “The Tomb” (4700 words).

At first blush, these are four Very Little Known Writers (VLKWs). But, as an investigation of Miller/Contento reveals, two are not so little known at all. “Charles Long” is a pseudonym for Frank Belknap Long. And “George Osborne” seems to have been a semi-accidental pseudonym for Robert Silverberg. Miller/Contento lists the byline as an editorial error — I assume the story was meant to be by Silverberg’s more usual pseudonym “David Osborne.” The indifferent Doctor, Vaisberg, and Ms. Detzer, on the other hand, seem legitimate LKWs: these are the only stories under their names in Miller/Contento.

“Riddle of the Deadly Paradise” is a fairly standard SF mystery about why a seemingly wonderful planet for colonization has led to complete extermination of all settlers. A young man joins a scientific expedition to this planet. Just by coincidence, the beautiful and fiery woman he ran away to space from is one of the scientists. Just by luck, I’m sure, the young man figures out the (not very surprising) real problem, saving the girl in the process. Marriage at 11, and she’ll be HAPPY to be barefoot and pregnant in the kitchen, you betcha.

“The Isolationists” is a slight story about a man sent to an unmapped planet to convince the inhabitants to join Earth’s Confederation. Naturally, the aliens want no part of this, and naturally, they are powerful telepathic beings well capable of enforcing their wishes. As I said, slight, but competent. (Silverberg was never less than competent.) Detzer’s “The Tomb” is about the Leader of a colony on Mercury, who has taken over and imposed a Fascist government. He is dying, and he plans to build a wonderful Tomb, in which he will bury all who know him, to avoid any unsavory stories getting out. But the only possible architect is his onetime friend, who turned against him when he became an oppressor. Do you think maybe the architect figures out a way to foil the Leader’s plans? Is the Pope Polish? Do you think things are very convincing? I hope not. 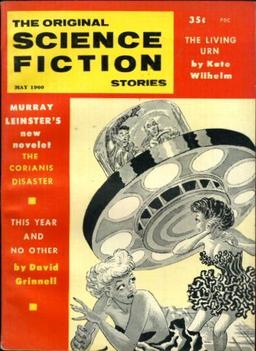 Finally, Maurice Vaisberg’s “The Sun Stood Still” is, as the title might hint, an SFnal version of the Biblical story of Joshua. The SFnal element is time travelers from a post-Atomic-War future who wish to alter past history so that Israel does not exist. So they plot to send a man back in time to foil Joshua. From the beginning, it’s obvious that an effect of the time travel will be to make the sun stand still. What’s disappointing is that the effect Vaisberg comes up with is so INCREDIBLY lame. This was one of those stories that, from the beginning, cause a little voice to whisper in my ear “Could this be it? The WORST STORY EVER?” Maybe not, but certainly a contender. Besides the silly plot there is unutterably clumsy exposition — literally pages of characters talking, telling the reader the world situation, as well as just plain silly politics, and absurd characters. Truly an awful story, and a pretty bad issue of this magazine.

The other issue I have is the May 1960 issue, which turns out to be the last ever issue of either Science Fiction Stories or Future. This issue has five stories. The cover story is a novelette by Murray Leinster, about 15000 words, “The Corianis Disaster.” There are four short stories: “David Grinnell” (Donald Wollheim) offers “This Year and No Other” (3100 words), Kate Wilhelm contributes “The Living Urn” (2800 words), Donald E. Westlake, about ready to abandon science fiction, has “Travellers Far and Wee” (1200 words), and finally there is a reprint, “The Alien Vibration” (5000 words), by artist Hannes Bok, which first appeared the February 1942 Future.

The cover and the only interior illustration are by Kelly Freas, for “The Corianis Disaster.” Features include A. Bertram Chandler discussing what we would call “Murphy’s Law” but which was then still called “Finagle’s Law” (misspelled Fingale on the title page — on purpose???); a silly parody in verse of Robert Sheckley’s Immortality, Inc., by Bret Hooper; an editorial; and a letter column plus reader rating.

“The Corianis Disaster” is a competent but uninspired story of a spaceship carrying a number of important passengers that gets lost in space. It turns out that it has jumped time tracks somehow, and that ends up in a universe with a duplicate of itself, and all its passengers. Which is a bad thing! But the plucky characters find a solution.

“This Year and No Other” is a crime story, about a journey by time machine to the far past, where the time travelers find a valuable vein of uranium. Unfortunately, one of them decides to grab it all for himself. The good guys, though, find a way to indicate his guilt to the future — or his present. Not a bad idea, but clumsily presented.

“The Living Urn” is another crime story. A disreputable art collector wishes to steal a rare “living urn.” But it turns out, in a nice twist, that he can thus be useful to the authorities, who want that object safely delivered to Earth. Minor but nicely done. “Travellers Far and Wee” is also slight, a tolerable little thing about people apparently charged with driving around New York and New Jersey forever, with the duty of being those annoying drivers we all deal with. And “The Alien Vibration” is a wild story about a man who ends up in another dimension, with beautiful women and strange fairy-creatures — another world, not our own, but who is the creator? OK, but a bit too illogical for my taste.

Not too bad an issue of a minor magazine — and it’s kind of sad that, all unannounced, this was the end for a long-lived if irregular pair of magazines. Indeed, a look at the entire history of Lowndes’ editorship shows him again and again making bricks without straw: he had tiny budgets, and irregular publication, but he found a way to usually (with the occasional exception such as the November 1958 issue cited here) produce decent magazines.

Rich Horton’s last retro-review for us was the July 1962 issue of Amazing Stories. See all of Rich’s retro-reviews here.