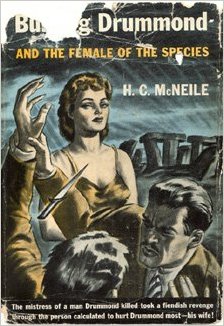 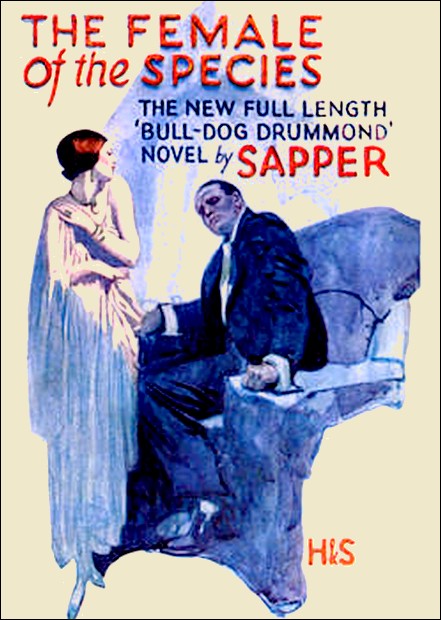 Sapper’s The Female of the Species (1928) is quite likely the best book in the long-running Bulldog Drummond thriller series. Its one failing comes late in the narrative and spoils it as assuredly as Mickey Rooney’s bucktoothed yellow-face performance as Mr. Yunioshi sours Breakfast at Tiffany’s (1961) for modern audiences. As a devoted fan of both Blake Edwards and Sapper, I do my best to make exceptions for both artists’ failings, particularly when they were acceptable in the times they lived in.

In the case of the former, the suggestion of pornographic photos in Truman Capote’s novella could never have been transferred to the screen with an Asian actor in the role of Audrey Hepburn’s frustrated landlord. Edwards soft-pedaled the material and defused a scene that never would have slipped by the Production Code if handled dramatically by offering Mickey Rooney in a broad caricature of an Asian. It was a star cameo in a comic stereotype still common in television sitcoms of the 1960s and Jerry Lewis films. Audiences at the time laughed at the fact that it was Mickey Rooney making a fool of himself and nothing more. Today, the classic status of the film makes the sequence stick out as an unfortunate example of racial insensitivity in a fashion that does not taint comedies of the day which are now viewed as an example of what then passed for juvenile humor.

So we come to The Female of the Species where Sapper’s engrossing thriller falls apart at the climax for modern readers by the repeated belittling of Pedro, an African henchman as a “nigger.” Worst of all, Sapper attempts black-face humor and notes the disguised Drummond doesn’t smell like a “nigger.” This isn’t a colonial jungle tale where the word was employed without contempt; this is a Roaring Twenties thriller where it is employed as a contemptuous slur. While allegations of Sapper’s racism are often exaggerated by modern commentators, when he does pile it on, he stands out among his contemporaries as genuinely intolerant of everyone and everything not British. Never is this more true than in this book where the sheer repetition of the slur from multiple protagonists who hold the man in contempt for the color of his skin leads one to feel repulsed. 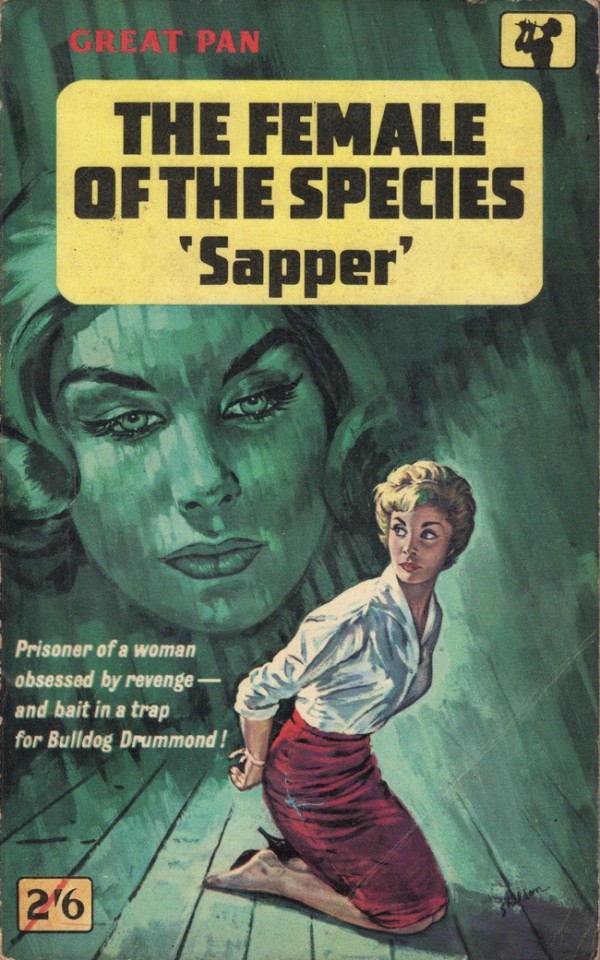 All of which is quite sad because up until the climax, Sapper delivers a corker of a book. The narrator, Joe Dixon, is a British everyman (albeit more quick-witted than most Sapper characters) who falls in with Hugh Drummond and his gang when Drummond’s wife, Phyllis, is abducted by Carl Peterson’s mistress, Irma, as the first part of an elaborate plot to avenge her lover’s death at Drummond’s hand at the climax of the previous book in the series. Irma borrows Rudyard Kipling’s 1911 poem, “The Female of the Species”, which concludes with the immortal line, “The female of the species is deadlier than the male,” and uses it as the starting point to a deadly scavenger hunt with Phyllis Drummond as the prize.

Of course, Irma has no intention of playing fair. Each piece of the puzzle comes with its own death trap and she very nearly wins the last round and just manages to escape with her life. But for the repeated racism, more pulp fans would be raving about this book as one of the finest thrillers of its era. Minus the racism, the story was adapted to varying degrees of fidelity for the films, Bulldog Drummond Comes Back (1937) and Deadlier than the Male (1966). As it stands, it is this book with its over-the-top intolerance that makes it most challenging for new readers to embrace the character and author and dooms the property to near obscurity. It stands as a tragic, but deserving, fate under the circumstances.

I read most of the Bulldog Drummond books in my teens, along with Dornford Yates (who remembers him, these days?) but I’m still not sure if I read this particular one; I certainly remember the Sixties film (which bore no resemblance to the books); mainly for how poor old Leonard Rossiter is paralysed by two sirens then thrown off his hotel balcony, and for the chess-game at the end. The male lead was originally the favourite to play Bond.

The first four Sapper BULLDOG DRUMMOND thrillers didn’t really bother me in terms of content. He was a True Blue Brit. He despised communism and socialism and thought every other nation was inferior. The stories play out with Drummond as a larger than life British patriot. The situation with FEMALE OF THE SPECIES is far different because Pedro is despised by Drummond and his gang because he is black. It’s the difference between nationalism and racism that changes my perception of the material.

Sometimes it’s hard to make allowances for a particular author, or a particular book. I’m sure you’ve heard about this big brouhaha re the World Fantasy Award and Lovecraft’s racism (which unfortunately seems to have been an integral part of his work) and I remember Richard Hanny (a likeable character in most other respects) grumbling away about whenever there was some murky business afoot there was invariably a jew at the bottom of it somewhere.

The anti-Semitism of authors like John Buchan and Sapper was tied in with conspiracy theories about Communism. Sadly, you can find newspaper articles from the era where it was alleged that the Russian Revolution was a Jewish plot. The day is likely coming soon where hardboiled detective fiction from Hammett through early Ross Macdonald will be criticized for its homophobia. Times change and it is difficult to see attitudes that were acceptable at the time the works were created going unchallenged. At the same time, I loathe the notion of suppressing works because of the ideas contained within. Sometimes a publisher needs only to add a brief preface explaining the offending material for modern readers.

I think you just have to accept that even authors you like will reflect some of the popular prejudices of the day – especially popular authors! It’s easy to forget that antisemitism was pretty much the cultural norm throughout Europe and the US prior to WWII. Also, I think there’s a spectrum (ie, I’d make a distinction between a persistent offender and an occasional lapse in judgement).

The character of Irma Peterson had been arodn form the first book right? I mention here in this article I wrote.