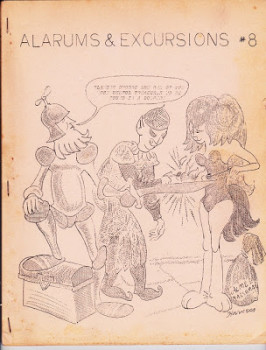 Despite what my post last week may have implied, I too have been culling my RPG collection. This isn’t driven so much by a concern about space – that’s what garages are for, after all – but utility. In the thirty-five years I’ve been involved in this hobby, I’ve accumulated a lot of games, but how many of them do I actually play with any regularity? Heck, how many of them do I play at all?

The answers to those questions are surprisingly short, as I’ve discussed before. Of course, I’m not so stonyhearted that I’d consign to the flames (or at least eBay) any RPG I hadn’t played in the last year or two. I’m a hopelessly sentimental guy who revels in nostalgia and youthful memories. That’s why I keep around Gamma World and Gangbusters, neither of which I’ve played in decades. I used to play these games with great regularity and I hold out hope that I will get to do so again (plans are afoot for a new Gamma World campaign later this month!). But Blue Planet or Spycraft or even D&D settings like Planescape or Dark Sun? Nah.

Overall, then, my RPG collection is growing smaller, though I prefer to think of it as growing more “focused.” That said, its size isn’t wholly on a downward trend. That’s because, while I’m buying very few new games, I’m continuing – even increasing – my purchase of RPG fanzines.

When I was a kid, gaming fanzines weren’t on my radar. I read Dragon and, later, White Dwarf, and was vaguely aware of Different Worlds, but all three of those were professional magazines produced by game companies rather than photocopied (or “Xeroxed,” as we said back in the day) pages lovingly stapled together in someone’s basement and then sent through the mail. I dimly recall hearing about Alarums & Excursions, probably from one of the older guys who hung around the hobby shop, though, as they would have been quick to point out, A&E is an amateur press association, not a ‘zine, a distinction that’s still somewhat obscure to me even today.

Regardless, fanzines played a vital role in the early days of the hobby, disseminating not only news and reviews, but also ideas derived from what players and referees were actually doing with RPGs at the time. Reading them, one could see the myriad ways that roleplaying games were being interpreted and expanded upon, which in turn sometimes gave birth to whole new games and approaches to gaming, something that, even now, sets them apart from the slicker, better produced “pro ‘zines” that followed in their wake.

In recent years, as 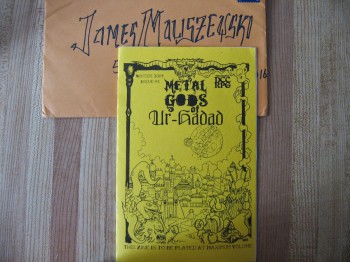 interest in what have come to be called “old school” RPGs has grown, I’ve noticed a concomitant growth of interest in fanzines. By that I don’t simply mean old ‘zines from the ’70s and ’80s. Rather, I mean an interest in creating fanzines to support one’s favorite games. There are several that have caught my attention over the last few years, such as The Manor, Crawl! and my current favorite, Metal Gods of Ur-Hadad.

There are too many more to name, but what they all have in common is that, like those original fanzines of yore, they’re unique takes on the RPGs to which they’re dedicated. Each issue oozes with more than creativity; it reflects the idiosyncrasies of their authors. That means a lot to me in this day and age, when so many of entertainment products, including roleplaying games, are made to appeal to the largest number of people possible. All the rough edges have been pounded smooth, along with the eccentric voices that, for me, are at the heart of this hobby. ‘Zines provide terrific venues for those voices to sing.

Better still – again, from my perspective – is that these ‘zines are real, physical products you can hold in your hands. When you order a copy of most of them, you can get it sent to you through the mail in an envelope addressed to you. Perhaps I’m a silly middle-aged man, but this means a lot to me. Admittedly, I’m a Luddite; I’m one of a vanishingly small number of people for whom electronic “books” hold no appeal. Thus, I appreciate the effort that goes into stapling these little booklets together, writing out the names of their recipients by hand, and putting a postage stamp on it.

I can’t think of anything more old school than that.

James: Well said. As I stated in my post after yours, there are some things that I’ll keep because I play them or love them too much. I like to think of the final version of my RPG collection to be lean and mean. 🙂

“All the rough edges have been pounded smooth, along with the eccentric voices that, for me, are at the heart of this hobby. ‘Zines provide terrific venues for those voices to sing.”

A comment about Dragon: I have the first one hundred issues (other than #1 itself, though I have a pdf scan of it I found on the internet), and though this definitely became a slick RPG industry magazine, the first ten or twenty issues don’t qualify as much beyond a fanzine.

I love the “rough edges” of these early ‘zines. For, as you so eloquently put it, this is where those eccentric voices can really sing!