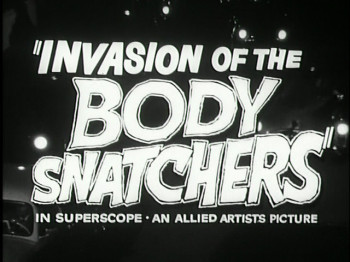 Now that’s the voice of paranoia if ever I heard it, but those final lines from the original Invasion Of the Body Snatchers (1956) still ring true today. In this increasingly digitized, on-camera, drone-filled world, how could they not?

Having already seen the atmospheric 1979 remake (directed by Phillip Kaufman), I fully expected the original Invasion to be clunky, loaded with lousy actors, and filmed by some dim-witted amateur with no understanding of cinematic composition. Imagine my surprise: Invasion is genuinely unsettling, well acted, and maintains a taut, fearless pace throughout.

The aces up its sleeve? Director Don Siegel, for one, and screenwriter Daniel Mainwaring, whose take-no-prisoners script delves deeply into the twin human terrors of identity and sleep.

The traditional line on Invasion is that it’s a metaphor for McCarthyism, that the film (and the Jack Finney serial on which it was based) skewers the whole notion of a “Red Scare.” For what it’s worth, Siegel never confirmed this theory. Indeed, the film ought to be read in reverse: it’s an ode to the dangers of conformity, and as such can be “read” in the same vein as Ira Levin’s The Stepford Wives, or even Eugene Ionesco’s play, Rhinoceros. 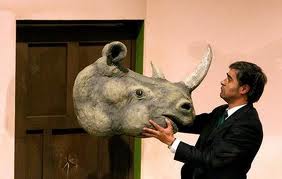 (In Rhinoceros, written in 1959, the entire population of an Italian town turns, one by one, into rhinoceri, except for our aging, stuck-in-his-ways hero. Rhinoceros is widely seen as an allegory about fascism in general and Mussolini in particular, but I now find myself asking whether Ionesco saw Invasion Of the Body Snatchers before he began work on his Theatre Of the Absurd masterwork. I rather suspect he did.)

The bottom line: it’s a terrifying thought that the world at large might really be out to get you, and that your friends and neighbors are in on the fix. If they are, then you won’t be able to convince anyone of your fears, because they either won’t believe you (because you sound irrational), or they’ve already been co-opted (and they’ll meet your every argument with carefully designed obfuscation and reassurances). 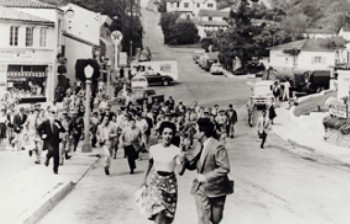 Cue The Kinks, singing “I’m Not Like Everybody Else,” a tune that really ought to have been employed in at least one of the three or so available remakes.

Siegel wasn’t a “political” director (unlike, say, Oliver Stone), but he returned to questions of identity repeatedly. In Dirty Harry (1971), Clint Eastwood’s Harry Callahan concludes early on that he can’t trust the members of his own police force –– but who exactly has it in for him?

In The Shootist (1976), John Wayne (in his final movie) feels certain that one or more assassins are headed his way, but he has no idea if those who stalk him are unknowns, allies, or friends. As a result, he can barely take a step without hesitating; the danger, as in Invasion, is tangible, unrelenting.

Bodysnatcher-wise, how does one go over to the enemy? Painlessly, of course. It’s not even a conscious choice. You go to sleep, and you wake up changed, altered. Catch a little shut-eye, and you become –– just like that –– one of them. Sleep itself, inexorable and inescapable, becomes the enemy. 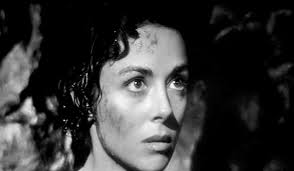 Invasion is hardly isolated in its disquiet stance over the human need to sleep. Other than death and head trauma, nothing else interrupts our consciousness so totally, or so seductively, to say nothing of sleep’s clockwork regularity. Every day, each of us surrenders, via rest, to a kind of enforced anonymity. We let our heads hit the pillow, or we curl up in a chair, and our eyes close. Next thing you know, we aren’t anyone in particular; we’re nothing, nowhere.

Think of Alice (through her looking glass), wandering lost in the forest where all names are forgotten. Think of Ursula K. LeGuin’s The Lathe Of Heaven, Shakespeare’s A Midsummer Night’s Dream, or Wes Craven’s A Nightmare On Elm Street (1984). Or consider countless role-playing games where, somewhere in the wilderness, the player characters must assign a watch –– and woe betide those who succumb to slumber. Disaster awaits all who surrender their essential claim to consciousness. 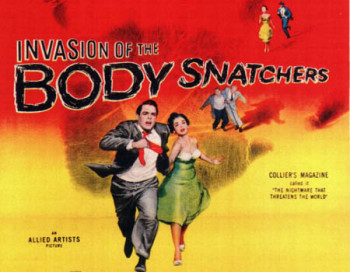 Visually, Invasion borrows heavily from film noir, but critics and pundits refuse to categorize Invasion as an actual noir piece on the grounds that the expressionistic lighting and off-kilter compositions that define the genre are (they say) always deployed in the service of an individual’s story, in order to illustrate through overt means the collapse and derailment of one person’s psyche.

Siegel strikes me as a director who doesn’t care beans for theory, and he understood from the get-go that the way to keep both his characters and the audience off balance was to roll out one noir trope after another, ranging from extreme close-ups to striking black-and-white shadow effects and odd, unexpected angles.

Bold chiaroscuro is the word of the day, with vivid patterns imprinted, shadow-wise, on walls and faces. Invasion, then, is a sci-fi outing that looks and feels like noir; the discombobulations of the latter are here leveled against society as a whole, and the device works like gangbusters. 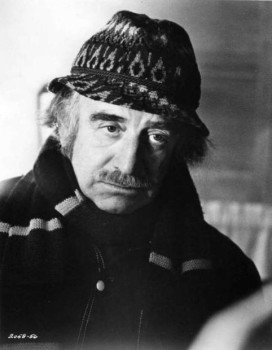 That Siegel achieved such memorable visuals is all the more remarkable when taking into account that he shot the entire film in just nineteen days. Mostly. Truth be told, there were nineteen days of “principal photography,” but then, once the studio got a gander at the film, they sent Siegel back to the field and forced him to add a framing device, one that provides a far more optimistic ending.

Mainwaring and Siegel’s original ending sees Dr. Miles Binnell (a solid Kevin McCarthy) running through night-time traffic, weaving in and out of headlights and yelling to all who will listen (viewers included) the words with which I began this review, “They’re here already! You’re next!”

Not exactly the sort of doomsday tone with which post-war Hollywood studios wished to be associated.

Taken on its own terms, the film’s frame/flashback device isn’t actually bad, but the original ending was downright nihilistic, and more importantly, artistically correct: the screaming-in-traffic ending, with the world deaf to Dr. Binnell’s cries, is the organic, logical upshot of the whole bodysnatching scenario. Anything less feels like pandering, the kind of false hope one gets in the desert when the water is gone and the massive Evian delivery truck turns out to be a mirage.

It’s not so much a pity as it is a tragedy that of the versions of Invasion in circulation today, none (so far as I know) feature Siegel’s original cut. Leave it to the bean counters to ruin whatever they can.

Attitudinally, the film remains very much of its time. The female characters do exhibit a certain strength now and again, and Becky (Dana Wynter) displays a ready wit in her scenes with McCarthy, but by and large, the women of Invasion are confined to what roles the mid-fifties allow. Men (and pods) drive the action from start to finish. No surprise there. In ninety percent or more of today’s Hollywood fare, they still do. Hollywood’s learning curve do be mighty slow.

The legacy of the Siegel-Mainwaring Invasion has been discussed at length (even ad nauseum), but with good reason. Its sci-fi premise tapped a universal pulse of worry, the sort of fears that an increasingly affluent society could afford to have. Name a zombie film that isn’t in debt to Invasion, and endless government conspiracy flicks have followed, many excellent: The Manchurian Candidate (1962), The Parallax View (1974), and more than a few X-Files episodes, to name a few.

And why not? Big Brother is most definitely watching –– and yes, I know that for a fact, because I just asked Google if it’s true, and Google forwarded my query to the NSA, along with most of my supposedly private and encrypted personal information.

I mean, that’s not paranoid of me, is it?

I first saw this film some half a dozen or so years after its theatrical release. Channel 10 in Columbus, OH, ran a double feature every Friday night, beginning at 11:30, called “Chiller Theater.” They showed everything from the original Universal pictures, like “Frankenstein” and “Dracula,” to the post-WW II Reds-as-aliens flicks and nuclear-radiation fueled giant ‘thing’ epics. I saved up paper route money and bought myself a portable b & w TV for my bedroom (complete with earphone!) and scared myself to sleep every weekend. But “Invasion” I watched in the family living room, by myself, after everyone else had gone to bed. Early 1960s America was a lot like an old black-and-white movie, and the fact that we hadn’t changed much as a society from 1956 (the year of the film’s release) to 1962, when I saw it for the first time, added to the stark realism of the story for me (and aren’t we all impressionable at 11 ½?). I saw the 1979 remake, with Donald Sutherland, and although I found it almost as frightening, I was nearly 30, and the film’s impact had lost something (that it was filmed in color may have been a factor). Memory no longer serves like it used to, but I think I did see the original downer ending that first time. All I do know is that, when the film ended that long ago night, I switched off the TV, just as our water softener began screeching through its 2:00 a.m. recycling period, and it scared me so much I practically flew halfway across the darkened house to my bedroom. It wasn’t the first night I fell asleep shivering under the covers, and it wouldn’t be the last.

smitty59, thanks for sharing that. Good to know that I’m not the only that thinks this flick has some juice.