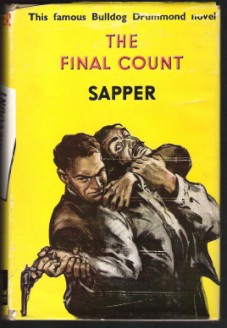 Sapper’s The Final Count (1926) saw the Bulldog Drummond formula being shaken and stirred yet again. The first four books in the series are the most popular because they chronicle Drummond’s ongoing battle with criminal mastermind Carl Peterson. The interesting factor is how different the four books are from one another. Sapper seemed determined to cast aside the idea of the series following a template and the result kept the long-running series fresh, as well as atypical.

The most striking feature this time is the decision to opt for a first person narrator in the form of John Stockton, the newest member of Drummond’s gang. While Drummond’s wife, Phyllis, played a crucial role in the first book, she barely registers in the early sequels. One would have expected Sapper to have continued the damsel in distress formula with Phyllis in peril, but he really only exploits this angle in the second book in the series, The Black Gang (1922).

The Black Gang reappear here, if only briefly, and are quickly dispatched by the more competent and deadly foe they face. This befits the more serious tone of this book, which has very few humorous passages. The reason for the somber tone is the focus is on a scientific discovery of devastating consequence that threatens to either revolutionize war or end its threat forever. Robin Gaunt is the tragic genius whose invention of a deadly poison that could wipe out a city the size of London by being released into the air proves eerily prescient. 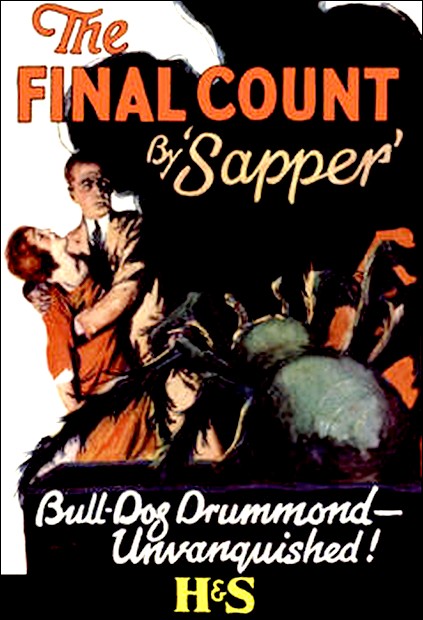 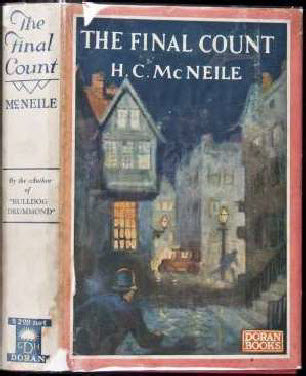 Sapper also foreshadows the best scene in Thomas Harris’s Black Sunday (1975) in the scene where Carl Peterson anonymously sends Hugh and Phyllis complimentary tickets to board the airship he plans on detonating over London. Darkly humorous as it may be, it is also treated more dramatically than one expects from a pulp thriller. I strongly suspect the racist tag attached to Sapper’s work which, to some degree, has been exaggerated in these politically correct times, is the reason commentary on these books is so rare to find.

The Final Count isn’t my favorite of the first four (that honor rests with its immediate predecessor 1924’s The Third Round), but it is still a satisfying read that harkens closer to the tone of The Black Gang in its intensity and realism. Carl Peterson is kept in the background for much of the book, but is given some strong scenes toward the end. The character’s actual finish is surprisingly muted with the suggestion (as in the first book with Peterson’s henchman’s death) that the character died a coward’s death. For an Englishman who fought in The Great War, nothing could be more despicable.

As with the second book in the series, the influence of Sir Arthur Conan Doyle that was so prevalent in the first and third books is barely detectable here. Sapper may have wavered between genre parody and an actual desire to comment seriously on The Great War, the threat of a Second World War, and the birth of international terror (at the time, in the form of Bolsheviks), but he remained a natural storyteller whose depiction of his larger than life British Everyman helped create a standard that still resonates today with the James Bond franchise.

The novel’s finish, with a wonderfully underplayed encounter between Drummond and Peterson’s bitter and grieving mistress, Irma, at the wreckage of the burning airship, sets the stage for the next book in the series and echoes the powerful ending of the original, as well as foreshadowing Ian Fleming’s masterful finish to On Her Majesty’s Secret Service (1963). Carl Peterson may have been down for The Final Count, but Drummond (and his avid followers) would eventually learn from Irma the lesson that The Female of the Species is Deadlier than the Male.