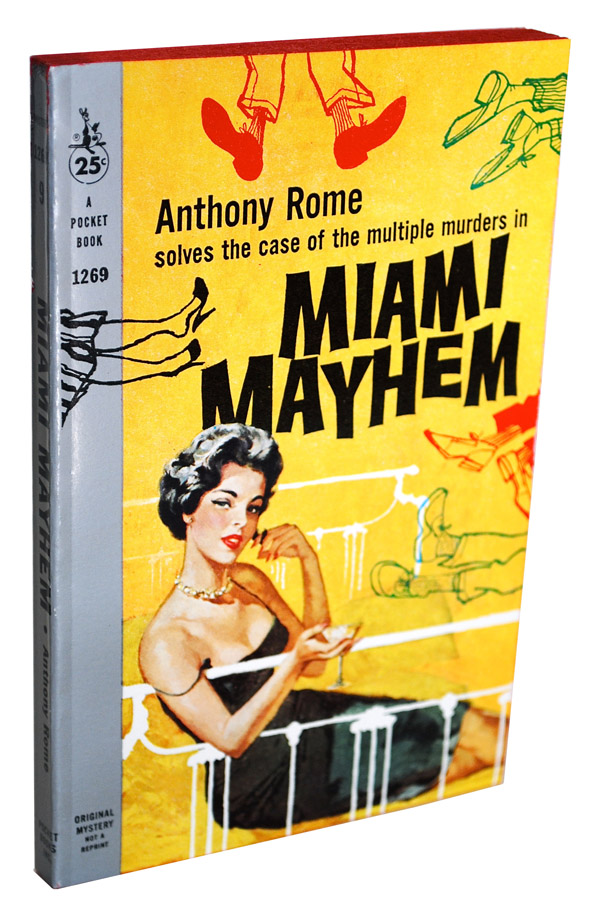 Tony Rome is best remembered today thanks to a pair of campy Frank Sinatra vehicles in the mid-1960s which portray the character as a middle-aged playboy drooling after bikini-clad lovelies half his age. The fact that the private eye operated out of a houseboat called “The Straight Pass” seems to have inspired John D. MacDonald’s Travis McGee private eye series, which launched later in the decade. The sad thing is such vivid recollections of the character do a terrible disservice to the books. 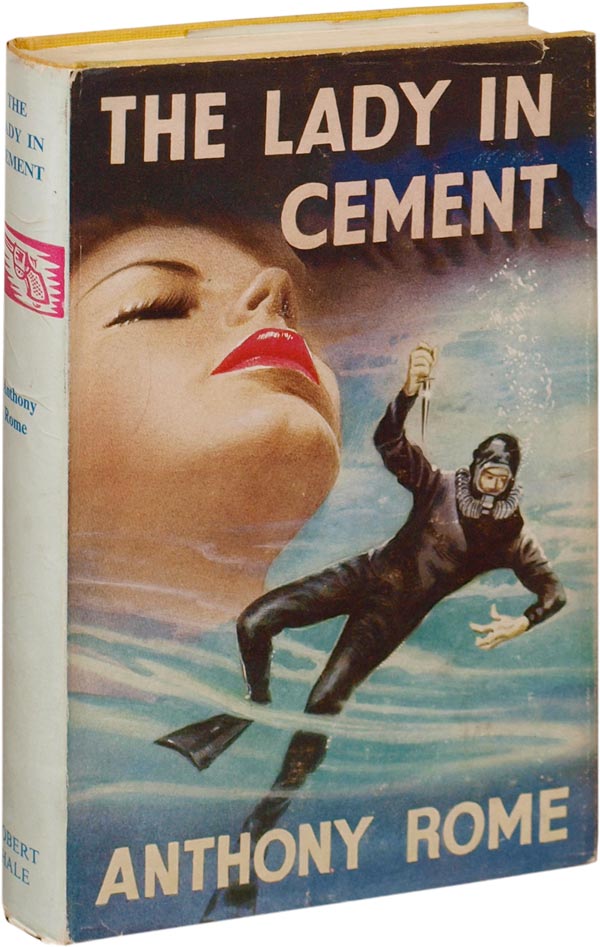 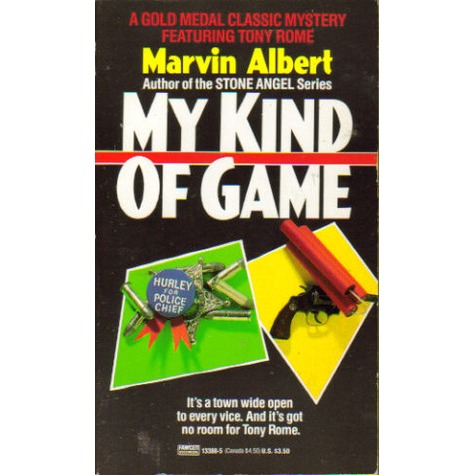 Tony Rome, on the printed page, is a private eye who carries a great deal of emotional baggage. He quit the Miami Police Department after his father (a police captain) committed suicide following public exposure by a political rival that he had once accepted a bribe early in his career. Tony quit the force and largely retreated from the world aboard his houseboat. He is most at home snorkeling in the beautiful and peaceful Atlantic Ocean. Crime routinely brings him ashore and Rome sees justice is done before retreating out to sea once more.

While no longer a young man, Tony has no interest in settling down or even seriously dating anyone. He feels the occasional attraction and pangs of loneliness, but in the end he remains the loner who knows he is too damaged to be of use to anyone else. He is also surprisingly self-conscious of his gambling addiction and realizes he would make a poor husband or father with his various issues.

Lest one think the character wallows in clinical depression, it is worth noting that Tony’s troubled past has afforded him an understanding of life’s other outsiders. Tony views the strippers and junkies and lesbians, that are treated as objects of lust or ridicule ripe for exploitation by the lowlife users that populate Miami, as real people deserving of compassion. In that respect, Sinatra’s interpretation of the character is a stinging betrayal of the humanity of the literary original.

The first book in the series, Miami Mayhem (1960), plays like an update of Chandler’s The Big Sleep (1939), with its exposure of the dirty secrets wealthy families can afford to hide most of the time. The second title, Lady in Cement (1961), sees Tony stumble into the middle of a sordid mob connection after discovering the corpse of a nude woman in a block of cement while snorkeling in the deep blue sea. The third and final book, My Kind of Game (1962), sees Tony on a mission of revenge when the surrogate father figure who mentored him in the private eye business is worked over while investigating big crime in a small town.

All three books have strong echoes of Chandler and the last has echoes of Hammett’s Red Harvest (1929). Every time I settled into thinking the story was purely a routine gumshoe caper, Albert would toss in an original wrinkle that would keep me off guard and hold my interest. All of the traditional hallmarks of the genre are present from the cop friend with a prickly relationship with the private eye to the detective as knight errant setting the world to rights by staving off the forces of chaos that threaten to overturn a surprisingly fragile society.

The titles were last printed in the late 1980s. Here’s hoping The Mysterious Press or Vintage Crime/Black Lizard or Hard Case Crime pick up the clues and bring these gems back into print. Perhaps hardboiled fans will get lucky and receive a deluxe hardcover omnibus edition from Haffner Press. Until then, one can only encourage the faithful to hunt eBay and ABE.com for secondhand copies of the paperback originals, the rare UK hardcover editions, the mid-1960s movie tie-in editions, or the late 1980s paperback reprints.

Tony Rome’s adventures are worth discovering, as are the talents of the criminally ignored Marvin Albert. For all those hardboiled purists who balk at continuation writers trying to resuscitate Philip Marlowe, discovering a Marlowe-inspired hero like Tony Rome should prove a more than acceptable alternative.

By coincidence, I have a post about one of Albert’s books up today, too.
http://billcrider.blogspot.com/2014/04/ffb-no-chance-in-hell-nick-quarry.html

Looking forward to reading it, Bill. I enjoy the Jake Barrow books although I don’t think of them as indistinguishable from Tony Rome as some have suggested. There’s an unsold “Nick Quarry” TV pilot that Albert wrote as well which was considered ultra-violent for the era. Never had the pleasure of seeing it, but it seems to tie in with the Jake Barrow character.

It’s always a crapshoot reading these old genre novels. These Tony Romes sound pretty good, but we’ve all been disappointed at one time or another. I’d always wanted to get around to one of Brett Halliday’s Mike Shayne books, and a few months ago I finally did – and it was terrible. On the other hand, I also recently read the first of Donald Hamilton’s Matt Helm books and it was a crackling good story, and I’m looking forward to more.

I’ve never been a fan of Brett Halliday’s work if that helps you, but I don’t consider the Tony Rome books classics of the genre either. What they are is solid entertainment that deserved better than the Sinatra movies for a reputation. Marvin H. Albert acquitted himself well and has earned more attention than he received (outside of France where he was afforded a great deal of serious critical acclaim).

Based on your descriptions, I’m definitley going to track down copies of these. I’m not expecting Hammett, Chandler, or Ross Macdonald – I just want some fair approximation of the hardboiled atmosphere that you get in their work. That’s where Halliday fell completely flat. And speaking of great genre writers, a bunch of John D. MacDonald’s non-Travis McGee books from the 50’s and early 60’s are being reprinted in nice paperback editions by Random House. It’s a lot stuff that’s gotten difficult to find. Great news!

Hope you enjoy them, E. McGargle and thanks for the tip about the new John D. MacDonald reprints!

Brash Books will be reprinting a lot of Albert’s books later this year, but not the Tony Rome novels. 20th Century Fox has the rights to those and is developing a TV series based on them.

I’ve not heard of that imprint so thank you for that, Bill. Not sure what to make of a TONY ROME TV series. I knew that TNT is developing an updated PETER GUNN series and a LEW ARCHER series is in development at TBS. A ROCKFORD FILES revival and updated PHILIP MARLOWE concepts have been juggling between big and small screen as well. We’ll see if any of them make the grade. I’m probably more forgiving of continuation novels than I am of a film or TV adaptation gone awry.

Bad film/TV adaptations can do great harm to writers like this. For years I assumed that the Matt Helm books were nonsensical crap because of the beyond over-the-top Dean Martin movies. Not so, and if you’ve made the same assumption, I urge you to give the books a try. They’re finally coming back into print after a long hiatus.

Yep, from Titan Books who are also doing a nice job of reissuing the original FU MANCHU series by Sax Rohmer as well as the great JAMES BOND UK comic strip omnibus editions. Titan has become a favorite of mine for all of that and their SHERLOCK HOLMES anthologies and the current editions of Alex Raymond’s FLASH GORDON Sunday strips. They’ve really gone a long way in establishing themselves as a genre favorite.