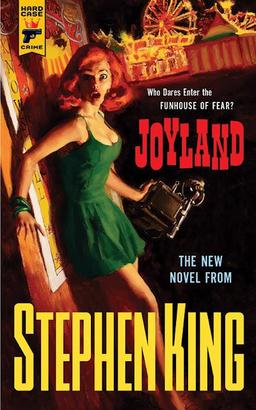 Admittedly, until Doctor Sleep, I had been over Stephen King for some time.

I caught up with him in college, falling hard for Salam’s Lot and The Shining, and proceeded to devour anything King I could get my hands on.

That is until I slammed head-first into The Stand.

That experience, much like a really bad bender, left me swearing I’d never, ever, do that again. And just like the days or weeks or even months after that horrible hangover, here I am once again ready to slug down a really strong glass of King – neat.

But this isn’t the Wild Turkey King of my youth – no siree.

This is an aged and far smoother vintage of King; free of what we now know was a fairly serious struggle with substance abuse.

Which totally explains The Stand, if you ask me.

And so having consumed Doctor Sleep, finding it a wonderful and satisfying with no nasty after taste, I now carry the experience a bit further with Joyland.

Published in early 2013, it was the novel that preceded Doctor Sleep by a mere three months. And though it is only a little more than half the size (288 pages vs. 531) I was a bit worried that in his newly won sobriety, King was back to his old model of cranking out novels at a breakneck pace. Historically, his best works appeared to have around a two-year interval between them.

However, inside of Joyland’s first chapter I knew I was destined to binge the entire thing. 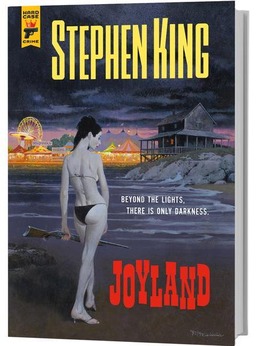 After realizing his romantic life is not going in the direction he’d hoped, Devin Jones decides to take a summer job at an amusement park. There he makes friends with Tom Kennedy and Erin Cook, also summer hires at Joyland, which years before had been the scene of the murder of a young woman named Linda Gray, whose ghost is said to be seen at the Horror House. He also befriends a young boy, named Mike Ross and his mother, Annie. Their lives all become entwined when Devin decides to investigate the mystery of Linda Gray’s unsolved murder by the “Carny Killer.”

So the first thing to remember is this isn’t a horror novel per se. Instead, it contains the element of “weird” in a way that keeps you on edge. Plus the narrative is just plain awesome. I hate to say that it isn’t “typical” King, because Doctor Sleep is probably in my top 20 favorite books of all time, but Joyland is entirely mesmerizing in a different way.

Remember the first time you went to a cheesy carnival at night, with your friends and without your parents? You rode rides that felt like they might fly apart at any moment and got sucked into unwinnable games by a real “carney?” It was exciting and creepy at the same time…

That’s Joyland to a tee.

For Joyland, King chose publisher Hard Case Crime, founded by Charles Ardai. If that name sounds vaguely familiar, it’s because Ardai is also known as the founder of the Internet service Juno (‘member them?)

Hard Case Crime seeks to recreate, in editorial form and content, the style of the paperback crime novels of the 1940s and ’50s. The covers feature original art done in the pulp style, and such books are most authentically displayed dog-eared and hanging out of the back pocket of your favorite, grungy Levis.

I love crime, I love mysteries, and I love ghosts. That combo made Hard Case Crime the perfect venue for this book, which is one of my favorites. I also loved the paperbacks I grew up with as a kid, and for that reason, we’re going to hold off on e-publishing this one for the time being. Joyland will be out in paperback, and folks who want to read it will have to buy the actual book.

So come in from the bone-chilling cold and follow the sunset down the beach all the way to Joyland. Eat a dog and take a spin on the wooden coaster. And pay no mind to that corpse you pass in the fun house which I’m sure is just part of the effects anyway…

It’s the perfect way to cure the winter blues.

Thanks for the review Sue. I collect Hard Case Crime books. So, even though I’m not necessarily a King fan, I bought and read this last summer. It’s an awesome summer read! But I can see how it might fight the winter blues as well.

If you liked Joyland, King also did another Hard Case Crime book a few years ago called The Colorado Kid that you might like as well.

Appreciate the comment James and glad you enjoyed Joyland. I swear I can smell funnel cakes and cotton candy every time I pick it up.

You collect Hard Case Crime books eh…? I might have to take that hobby up myself and I will definitely try out The Colorado Kid.

Sue, just so you know, Joyland is very unlike most of the Hard Case Crime books. In fact, it seems to me that Joyland barely fits within the genre of crime or noir fiction. It makes me wonder if King does these books as a sort of favor to boost the Hard Case line with his celebrity status.

I read Joyland this summer. It was the first new King I had read in probably 20 years (I think The Green Mile was the last one) and I was very pleased to be reminded of what a terrific storyteller he can be. Of course he’s still Stephen King, so there’s the patented “go-too-far gross out” passage…but just one. I’ve always thought his strengths show best at shorter lengths, and he really put the hooks in me with Joyland. I’ve recommended it to everyone.

EMC,
Interesting observation about King being at his best in shorter stories. Now that I think about it, I agree.

First Joyland and then Dr. Sleep. Let’s hope he’s on roll. “Mr. Mercedes” is next with a June 3rd release date. But at 496 pages, I’m just a tad worried…