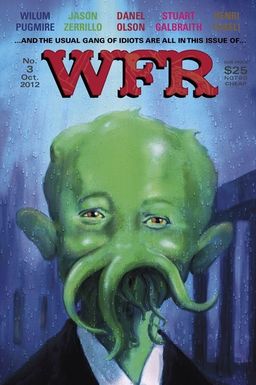 Two years ago I reported on the first issue of S. T. Joshi’s new magazine devoted to the study of weird and supernatural fiction, Weird Fiction Review (not to be confused with Ann and Jeff VanderMeer’s new online journal, also called Weird Fiction Review. Go figure.)

I recently stumbled across a pic of the third issue of Joshi’s WFR (at left), and it made me laugh out loud. I had to order a copy, and it arrived this week.

There’s lots to enjoy with the massive, 232-page issue. The front and back covers (see both here) are tributes to Mad magazine and the timeless artwork of Don Martin. Inside there are seven original stories from Michael Cisco, Joseph S. Pulver, Sr, and others.

There’s also a host of intriguing articles. Darrell Schweitzer looks at Lovecraft’s influence on one of the most important pulp SF stories ever written, “Who Goes There?”, in “John W. Campbell’s Lovecraftian Tale,” and Bradley H. Sinor presents a previously-unpublished interview from 1994, in “Excellence Demanded, Whiners Piss Off: The Last Interview of Karl Edward Wagner” (which picks up several of the themes in Wagner’s letter to editor Robert A. Collins published in Fantasy 55.)

Weird Fiction Review 3 was edited by S.T. Joshi and published by Centipede Press on March 19, 2013. The issue contains fiction, poetry, and reviews on high quality paper with lots of color. It is 232 pages, priced at $25 for the sewn trade paperback. It’s a high quality package throughout. It’s limited to 500 copies, and is currently on sale for $20 from the publisher. Get more detail and order copies at Centipede Press.

Centipede Press stuff is always gorgeous but unfortunately very expensive. Don’t get me wrong–I don’t think you get ripped off; I think you get a lot for your money. But for those of us on a budget, our dollars go further (more books) elsewhere.

I’m thankful for all of the older works that Centipede has kept in print. My understanding is that there are a few of these niche, high-end, horror publishers. More power to them.

That cover art is brilliant. Thanks for showing us!

According to Jeff Vandermeer, the two version of Weird Fiction Review exist in a “symbiotic relationship.”

Oh, I know exactly what you mean. I was excited to learn that they were planning a massive, 900-page anthology of the best of Carl Jacobi, the latest volume in their Masters of the Weird Tale set. I steeled myself for a high price… but when it was finally announced, it was $350! Even with Amazon’s discount, it’s still over $300, well out of my price range:

One the other hand, Centipede recently published Dark Melody of Madness by Cornell Woolrich, which is only $18 in paperback:

And this issue of Weird Fiction Review is only $17.14 at Amazon — well worth the price, in my opinion:

> That cover art is brilliant. Thanks for showing us!

Isn’t it? I opened the issue expecting to find more parody inside… sadly, that’s the only concession to MAD. But still, it shows a welcome (an unexpected) tendency to whimsy on the part of the editor, which I found appealing.

> According to Jeff Vandermeer, the two version of Weird Fiction Review exist in a “symbiotic relationship.”

Yeah. No idea what that means, though. I think it just means they’ve agreed to share the title.

Now I want that symbiotic relationship to be creepily tentacular and extradimensional.

Sarah, you bust me up.