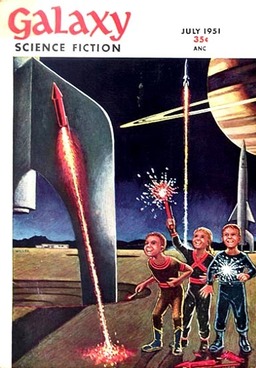 With a colorful, 4th of July holiday-appropriate cover, the July issue of Galaxy hit newsstands (or arrived in your mailbox if you were a subscriber), much to the delight of its readers (or so I imagine). The issue felt very full — as though H. L. Gold used some undetectable device to cram extra fiction into the folds. Or perhaps it was the anticipated conclusion of “Mars Child” and the absence of any science article. At any rate, I think this was one of the better issues.

“Venus is a Man’s World” by William Tenn — Ferdinand is the only boy on a rocket filled mostly with young women on a journey to Venus. That world offers a better opportunity of finding a suitable husband than Earth, where the population is mostly made up of women. Not that Ferdinand cares about any of that. He just wants something to do, so he explores the ship, including restricted areas, like one of the lifeboats. Except that someone’s already in the lifeboat — a stowaway who calls himself Butt. And Butt knows all kinds of things that Ferdinand’s sister never talks about. If only he’d let Ferdinand hold his gun…

I absolutely loved this story, and it was easily my favorite of the issue. The narration is told in first-person from Ferdinand’s point of view, and it is hilarious and engaging. Butt’s character is outstanding. This is also a piece that stands the test of time. It was eventually collected in William Tenn’s third collection, The Square Root of Man (1968).

“Common Denominator” by John D. MacDonald — As humanity begins to study another advanced race in the galaxy, they discover that the aliens have a crime rate and insanity rate of nearly zero. Charting the past millennia reveal that it all improved eight thousand years in the past. Lambert, Chief of the Bureaus of Racial Maturity, has the chance to speak with one of them and to try to understand how such a change was possible.

While the story itself is written well, I found the premises simplistic and absurd. But I’m not going to reveal the reason for the alien race’s rise in peace and safety because that is part of the bite of the story. I’m starting to see more of this trend in some of Galaxy’s fiction, though, where an author will envision what humanity (or a variety of humanity) might look like if X or Y was subtracted or added. And that utopia is but one tweak away.

“Syndrome Johnny” by Charles Dye — New plagues strike the Earth’s population like deadly waves that level each generation. Rumors circulate of a single man who triggers each onslaught. Dr. Alcala doesn’t believe such rumors, but a federal investigator thinks otherwise, even to the point of accusing one of Alcala’s associates of being the culprit. 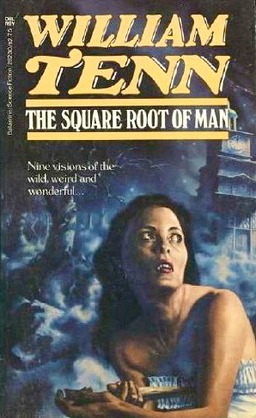 This was an interesting story and premise. The characters are a little lacking, but it’s not a bad piece.

“Mars Child” (Part 3) by Cyril Judd — Tony and the other colonists continue their search for the stolen Marcaine. They’re also banking on a journalist from Earth named Graham who came to their colony to learn about their lives. But Graham turns against the colony, reporting them as a hive of drunkenness, narcotics and other crimes. Without anyone on their side, the colony will soon face eviction, not only from the colony, but from the planet.

The conclusion has some surprises, and I felt satisfied by the ending. Tony showed some warmth that wasn’t in the previous sections, and there was also some nice action in the plot. This is an interesting, nostalgic novel overall, and if you have a few hours to spend on science-fiction from the fifties, you might consider this one.

“Pen Pal” by Milton Lesser — Aging spinster Matilda Penshaws patiently awaits the perfect man. She diligently checks the pen pal columns for eligible bachelors, and one day, she thinks she’s found someone special. When she tracks him down to his home, she discovers he’s not at all what she actually wanted, though he is exactly what he advertised.

It felt a little odd reading this, knowing how technology has changed, simply in how she uses a “pen pal column” and then has to ask several people in town about where the man lives. Today, it would be dating sites and emails, etc. But I could look past that and just smile with the author at the items he meant to be funny.

“Appointment in Tomorrow” by Fritz Leiber — The Thinkers guide society now, and why shouldn’t they? Where other leaders have failed, they have produced amazing results, such as a computer so unimaginably powerful it’s almost as if God Himself is among them. Or is it all an illusion?

This was a creative tale from Leiber. The details around the Thinkers and their rise in power seems so plausible, which makes the humor almost sad.

Matthew Wuertz’s last retro review for us was the June issue of Galaxy Science Fiction.

I have only one complaint about this issue, and it is SERIOUS. The woman who had been appearing on the back cover was replaced by text?!?! A very poor first impression, indeed.

I love the Independence Day cover, and yes, I am sure this issue was much anticipated in its day, since the serial was coming to an end, and the overall quality of the magazine must have been well known by this point. The feeling remains with me now when I know a new issue of Fantasy and Science Fiction is on the way.

“Venus is a Man’s World” was my second favorite. Ferdinand is a good, sympathetic character for young, adventurous readers, and Butt (great nickname!) is dangerous but wise. The illustration of all of the girls admiring him is priceless. I enjoyed the easy writing style and the social issues that came into play. A rocket ride to Venus in a ship full of lonely girls…what’s not to like?

“Common Denominator” reminded me of an article by Garrison Keillor in National Geographic, which I read sometime in the early 1990s. He was discussing contemporary Danish society, and describing at great length how they function by making sure no one person garners too much attention or grabs too much power. The aliens in this could be extremist Danes (kind of an oxy-moron, but it works) who force this attitude upon society. Matt, I agree that the idea is simple and implausible. Utopian ideals never really work for me.

“Syndrome Johnny” was my favorite from this issue. The chase and the gradual discovery of the culprit were an exciting read. Speculative technology from the medical field is not used enough in Science Fiction, in my opinion. This story is not on par with “Flowers for Algernon,” but it is a nice addition to a less common sub-genre.

“Mars Child” adds some action and continues its social dramas in final installment. The emergence of the Brownies was inevitable and maybe even a little predictable, but no less enjoyable for that. There is murder, kidnapping, and the fate of a Mars colony to keep up with. I enjoyed each part of this story, and this chapter was the best.

I cringed and laughed my way through “Pen Pal.” Don’t get me wrong…I loved it, but as Matt says, the changes in society and technology are hilariously apparent. The way Matilda tracks down Mr. Gorka probably seemed resourceful and efficient in 1951. Now, it is antiquated and probably in violation of most anti-stalking laws. Not only that, Matilda allows herself to be locked in a room in a stranger’s house in her quest to meet said stranger. Creepy! Finally, we find out that Mr. Gorka’s wife was letting him shop for new female companions. The story was a fun and and easy read, and the implausible, or maybe just dated, social situations made this piece unique.

“Appointment in Tomorrow” was the least memorable in this issue for me. Literally. I had to go back and skim it to remember the story from when I finished it a month ago. The cautionary commentaries here about power and human nature resonate in any era. It’s the kind of story I hate to love, because it is so real. Plus I like giant 1950s computers, even if…well, I won’t spoil it.

Thanks again, Matt. Happy holidays, and see you in a month. I am going to wait a bit longer to read the next issue so they are more fresh in my mind and I can be a little more insightful and original. I am enjoying this ride very much.

Gus, thanks for the comments. Galaxy is more fun with friends. 🙂

Another comment on “Pen Pal” – what better thing to do after being essentially abducted than take a nap? Goodness…