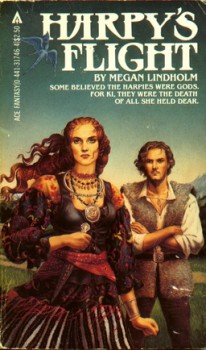 Before becoming the better known Robin Hobb, Mary Astrid Lindholm Ogden wrote under the pen name Megan Lindholm. Today, what little she writes under the Lindholm name tends to be contemporary fantasy. Initially, though, some of it came very close to heroic fantasy. Ogden’s first published story was a swords & sorcery tale under the Lindholm byline, in Jessica Amanda Salmonson’s important 1979 anthology Amazons!.

That first story, “Bones for Dulath,” introduced a pair of traveling adventurers: the stolid wagon driving Ki and her more lighthearted companion Vandien. In a review of Amazons! I wrote last year I said:

It’s not an especially exciting story but Ki’s voice and the easy camaraderie between the two feels real and comfortable. Ki and Vandien find themselves face to face with a strange, dangerous mountain creature and a town of people who’ve come to see it as a god. I’ve read a few of Lindholm’s novels under the Robin Hobb name and enjoyed them but they’re more mainline fantasy than this good slice of S&S.

In her first published novel, Harpy’s Flight (1983), Lindholm returned to Ki and Vandien to tell how they met and became companions. It’s not the work of heroic fantasy I was expecting based on “Bones for Dulath,” but instead something closer to the mainline fantasy of her Hobbs books. Still, it is good solid work, particularly for a first book. Lindholm/Hobb has a tremendous talent for creating truly strange, alien worlds and peopling them with multi-dimensional human characters, not simply hangers for a bundle of traits and quirks. That talent is beautifully displayed throughout Harpy’s Flight.

Plotwise, Harpy’s Flight is about little more than Ki’s effort to cross the dangerous Sisters’ Pass late in the season when snow will have started to block the road. But during the course of the journey she finally lets go of the horrible events which seem to have left her life disfigured beyond all repair and begins to reach forward toward a new one. Along the way Ki meets several serious temptations that would leave her either trapped in a false life or further psychically wounded. Ki’s resistance and her soul’s revival make up the greater portion of the book. 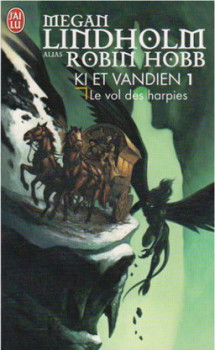 Harpy’s Flight opens with a detailed description of Ki scaling a dangerous cliff face. Her goal is the nest of a harpy family that has ruined her life in an abominable way. Her husband Sven and her two children were killed and eaten by them. Despite the near religious awe with which her husband’s people regard harpies, Ki’s people consider them dangerous monsters worthy only of death.

Ki’s adversaries are not the woman-bird hybrids of Greek legend. Instead, they’re ferocious turtle-beaked monstrosities that stand taller than a human and strike their prey from above on great leathery wings. They also have the ability to give visions of dead loved ones to humans should they so wish. This power forms the core of Ki’s husband’s people’s relationship with the harpies. Her vengeance on these beings leads to great conflict with her in-laws when she finally comes to them to tell them of Sven’s death.

After her time spent with her with husband’s people, Ki returns to the work she’s done for years as a teamster. Raised by the gypsy-like Romni people, Ki travels in a great wagon that serves equally as home and transport. For a price she will carry what needs to be carried by whomever pays her. As part of an elaborate plot to deter thieves, she signs on to hide a cache of jewels amongst sacks of slat and grain. Other wagons are hired as decoys and sent off on other trails.

It is on her way toward the mountain pass that Ki meets Vandien when he makes an attempt to steal from her. On the run from his own troubles, Vandien is half-starved and weak. Ki takes him in and together they set off to cross the snow-bound mountain pass.

Harpy’s Flight interweaves Ki and Vandien’s mountain travels with flashbacks to Ki’s stay with her husband’s family. She hadn’t been aware of the harpies’ power to grant them visions of their dead. The terrible, almost heartbreaking dependency on the harpies and the society it has brought into being is one of Lindholm’s best achievements in the novel. The threat Ki unintentionally poses to this near-enslavement leads to drastic events that are played out as she and Vandien dare the mountain pass. 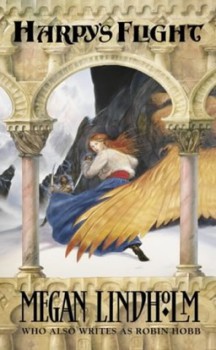 Harpy’s Flight is no momentous discovery, but it is a good one. The thing I liked best about the story “Bones for Dulath” was the camaraderie between Ki and Vandien. Here we’re shown how that ease was earned by both characters. It’s built on trust and a real, palpable friendship that emerges from shared danger. They never succumb to romance or casual lust, something too common between male and female fictional characters. It’s the birth of their friendship that is Harpy’s Flight‘s true core. That burgeoning connection is what leads Ki towards freedom from the tragedy that has shaped her life.

At the book’s end Vandien makes an offer to Ki:

I could offer to never give you anything I didn’t give freely, with no thought of repayment, without even a thought of the giving.

It’s a wonderful sentiment and sets the stage for the three more volumes of adventures Lindholm wrote for the pair.

Oh, and while I said “Bones for Dulath” wasn’t the most exciting of stories, this novel definitely has its action-packed moments. I included the French cover illustration to give you a taste of the tension of the mountain crossing. Coupled with the cliff climb in the beginning, several monster battles, and a run in with the sisters haunting the mountain pass, there’s more than enough adrenaline pumping through the story. Still, the true strengths of Harpy’s Flight are the characters and the strange world Lindholm created.