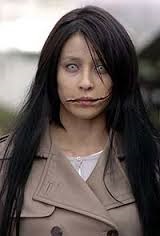 You’re going to love this…

Autoway Loop, one of Japan’s largest wholesalers of tires, has recently employed the image of Kuchisake-onna (the “Slit-Mouthed Woman”) as its new “it” girl.

According to Japanese urban legend, Kuchisake-onna is a woman who is mutilated by a jealous husband and returns as a malicious spirit. When rumors of alleged sightings began in 1979 around Nagasaki, it spread throughout Japan and caused panic in many towns. There are even reports of schools allowing children to go home only in groups escorted by teachers for safety, and of police increasing their patrols.

Flash forward to 2013, to an ad agency somewhere in Japan who are tasked with making snow tires interesting.

The results are awesome (especially the guy with the high-pitched scream toward the end), though I’m not sure afterwards I’d remember someone is trying to get me to buy tires.

I remember when the first wave of Japanese (and other Asian) horror was hitting about 10 years ago. I thought it was some of the most chilling horror around at the time.

It’s cooled a bit. But, personally, I still find it to be really effective–this commercial is a case in point.

So true. That creepy little girl from the Japanese version of The Ring scarred me for life…

Man! That commercial is genuinely creepy.

I thought I was prepared for it, but it still made me jump. I watched it again this morning… and I jumped AGAIN.

Okay, I admit, I jumped back from the screen at that one. Then had a good chuckle. And I consider myself fairly immune to scares on the screen, at least those from Hollywood.

Ha! Love this. Technically (yes, I once went to film school, which makes me more of an idiot than an expert, but) all they’ve done here is cheat: they’ve edited the piece so on one frame, the girl is still fifty yards away, and on the next she’s on the windscreen. By adding in the sound effect of impact, there is no way we can do anything BUT jump, ‘cos the crazed zombie snow-girl has just violated the laws of time and space––and thus our best reasonable expectations.

Well done. And proof that in film at least, the right sort of cheating is delightful.

Mark, in my opinion the whole from-50-yards-away-to-right-up-in-your-shiz is precisely what creepy entities typically do, especially the Kuchisake-onna.

As far as I’m concerned, I’m buying these tires just in case.

Ty, good for you for not falling for the cheap moves Hollywood passes for horror these days.

Now about that stuffed clown in the corner of your bedroom…

Sue, the clown has been dismembered, burned, the ashes sprinkled with holy water, collected into a bottle, dropped into a bucket full of concrete, the concrete allowed to dry, then the bucket dropped into the Atlantic Ocean.

If that doesn’t work, I’m calling the Winchesters.