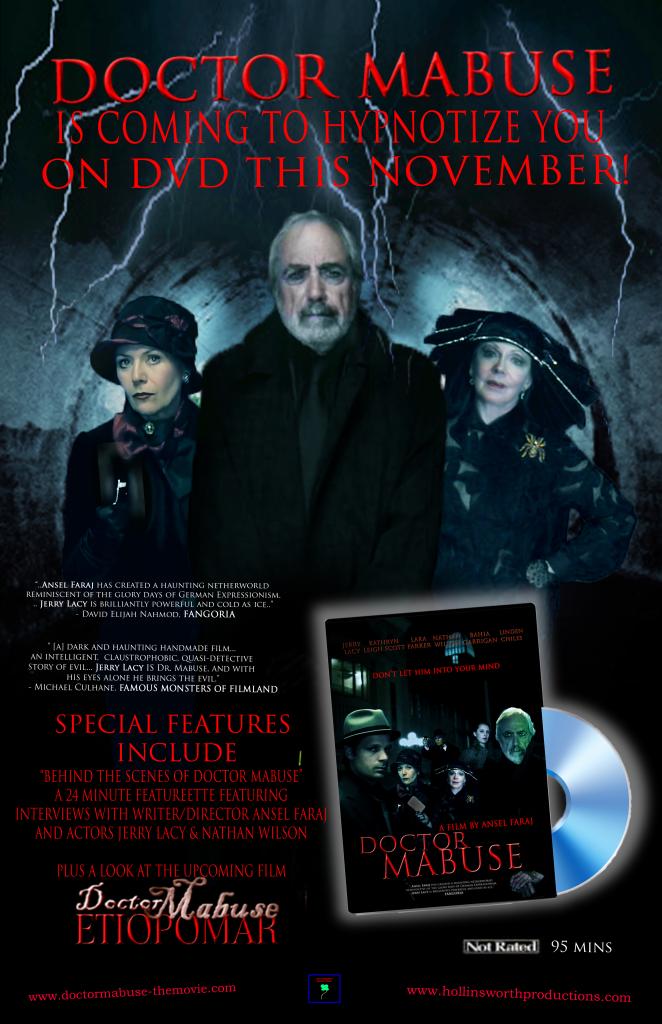 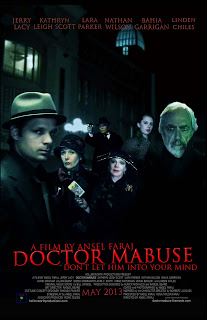 From the original Roaring Twenties figure of Jacques’s fiction and Fritz Lang’s epic two-part silent film and its Depression-era sequel to the character’s rebirth, which book-ended the rise and fall of the Berlin Wall and the beginning of the modern police state with its intricate and intrusive surveillance systems, Mabuse’s long cinematic history incorporates Expressionism, film noir, krimi, Euro-trash, and now modern independent film.

Ansel Faraj is the ambitious young man who has brought Dr. Mabuse into the twenty-first century. A mere twenty-one years old, Faraj has already written and directed twenty-five independent films for his Hollinsworth Productions over the past seven years. Dr. Mabuse, newly released on DVD, shows a surprising polish and sense of artistry rarely found in the work of young filmmakers.

Most surprising is how well Faraj makes use of his modest budget to the film’s overall advantage, instead of its detriment. The Spartan production values assist in creating the dreamlike quality of the film. This can best be appreciated by watching the film in its entirety. Judging the results by the trailer fails to do justice to the neo-Expressionistic mood Faraj has managed to capture here.

A tremendous part of the project’s success is down to Jerry Lacy, who stars in the title role. He is never less than mesmerizing in the part and his presence pervades the film, allowing him to dominate scenes he doesn’t even appear in. The paranoia of this nightmarish dream-world is perfectly realized and much of the chemistry of the film is down to Faraj and Lacy’s ability to perfectly complement one another’s strengths as writer-director and actor. 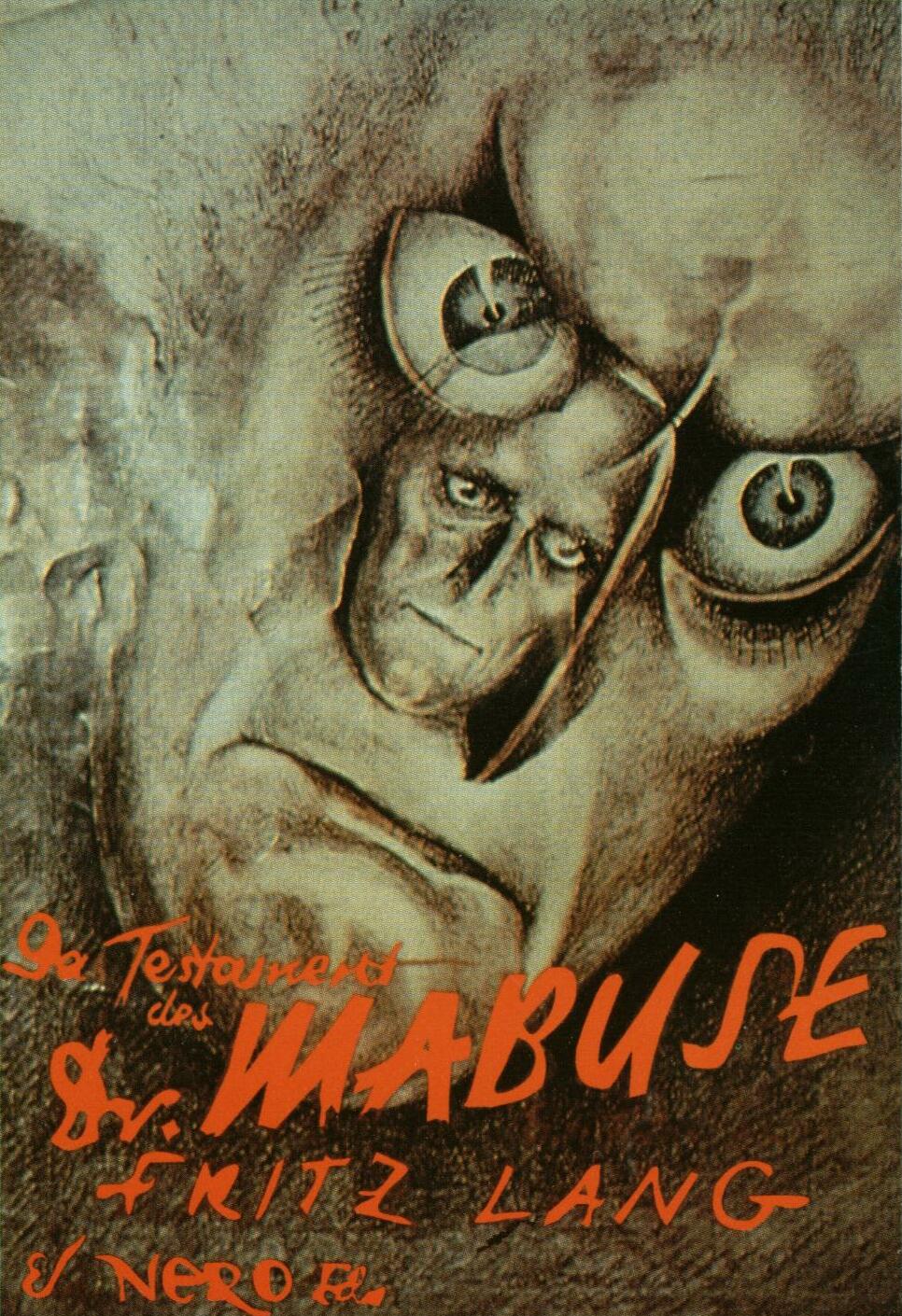 Of course, much of the attention the project has received has focused on Lacy and co-stars Kathryn Leigh-Scott and Lara Parker’s association with the cult classic 1960s Gothic soap opera, Dark Shadows. Casting actors of their age in major roles does lend the project a gravitas that would be lacking with just the younger actors. Their casting seems entirely appropriate for a property that recalls the past on multiple levels.

Part of this association with the past is reflected in character names. As with Claude Chabrol’s Doctor M, the last Mabuse film a quarter of a century ago, Faraj pays tribute to what went before with knowing nods and in-joke references rather than in seeking to link his story to the continuity of the past.

While it is entirely in keeping for a mood of paranoia and sense of impending doom to pervade a new Mabuse film, Faraj takes the link with the occult, which has always been kept deliberately ambiguous in the past, and chooses to make it explicit. The denouement left me recalling Nicholas Roeg and Donald Cammell’s disturbing but artful 1970 thriller, Performance.

I believe David Kalat was the first Mabuse scholar to make note of the French meaning of the name (Mabuse is literally “self-abuse”). The implication of self-destruction, which was always intrinsic to the material, likewise becomes more overt in Faraj’s film. 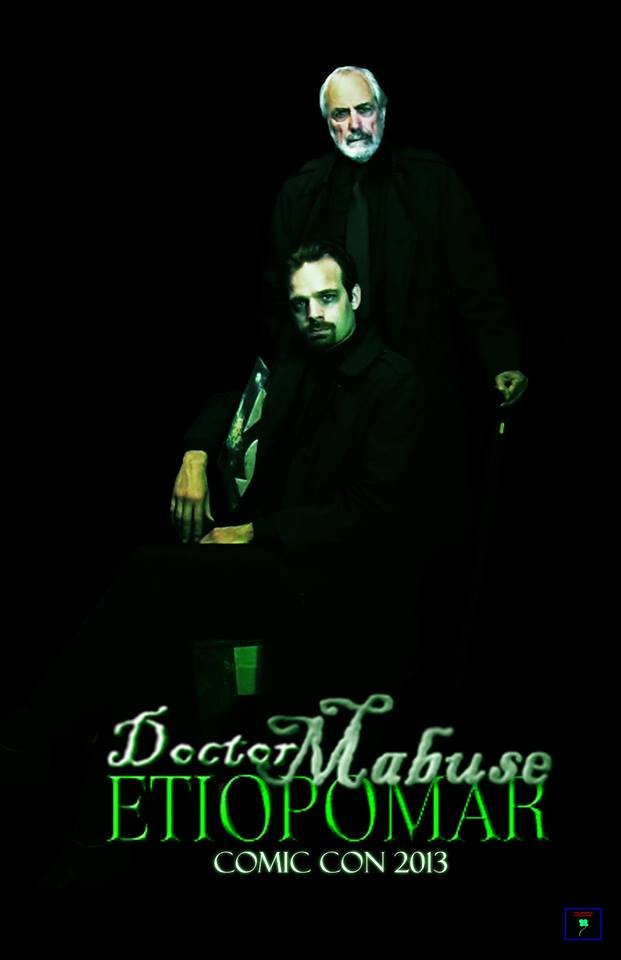 Interestingly, Faraj picks up on the novel’s thread of Mabuse creating a utopia out of the ashes of the dystopian nightmare and makes it crucial to his film. Etiopomar, in the novel, was to be a South American colonial refuge for Mabuse to escape the urban jungle of Germany on the brink of collapse. The suggestion here is that Mabuse will raise Etiopomar from the ashes of the film’s unnamed city on the point of collapse. This fascinating plot twist sets up Faraj’s sequel, which recently wrapped shooting.

As a longtime Mabuse fan, I greeted news of this project with skepticism. CCC, the German company which has controlled the rights to the property in Europe for over 50 years, had been planning a Mabuse spoof. What Faraj has conjured is far more interesting. I urge you to visit the official website at http://www.doctormabuse-themovie.com/ for details about the DVD and immerse yourself in this strangely familiar world that could very well be our own. As longtime fans are aware, Dr. Mabuse could be anyone. As chaos and anarchy threaten the fragile infrastructure of the Western world, the argument could be made that Mabuse isn’t someone, he’s everyone. He is legion.