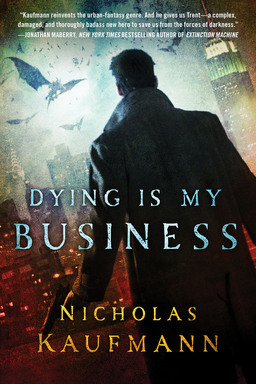 I love these Chris McGrath covers. He does terrific character portraits and unique things with light. His characters perpetually seem spotlighted by a fog-drenched glow and no artist today makes his heroes more stylish. Just check out his gorgeous covers for Ken Scholes’s Canticle or Max Gladstone’s Three Parts Dead (or see a more complete gallery at his website.)

I think McGrath was an excellent choice for Nicholas Kaufmann’s dark urban fantasy, Dying Is My Business, the tale of a badass hero facing down the forces of darkness in modern-day Brooklyn.

Given his line of work in the employ of a psychotic Brooklyn crime boss, Trent finds himself on the wrong end of too many bullets. Yet each time he’s killed, he wakes a few minutes later completely healed of his wounds but with no memory of his past identity. What’s worse, each time he cheats death someone else dies in his place.

Sent to steal an antique box from some squatters in an abandoned warehouse near the West Side Highway, Trent soon finds himself stumbling into an age-old struggle between the forces of good and evil, revealing a secret world where dangerous magic turns people into inhuman monstrosities, where impossible creatures hide in plain sight, and where the line between the living and the dead is never quite clear. And when the mysterious box is opened, he discovers he has only twenty-four hours to save New York City from certain destruction.

Nicholas Kaufmann is the Bram Stoker Award-nominated author of General Slocum’s Gold and Chasing the Dragon. This is his second novel.

Dying is my Business was published by St. Martin’s Griffin on October 8. It is 369 pages, priced at $15.99 in trade paperback and $9.99 for the digital edition.

Nicholas Kaufmann - What’s My Favorite Bit in DYING IS MY BUSINESS?

[…] Another quick bit of fun news: Dying Is My Business is featured on the Black Gate website. It actually focuses on cover artist Chris McGrath, who deserves every bit of attention he gets, but editor John O’Neill also has some nice things to say about the book. Check it out here. […]

[…] October I talked about Nicholas Kaufmann dark fantasy novel Dying is My Business, which I called “the tale of a badass hero facing down the forces of darkness in […]