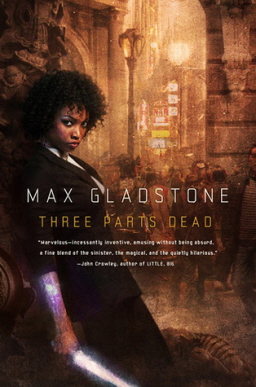 The fall is a big time for fantasy releases. We see a lot of press releases and advance proofs in the build-up to the holiday season, and everyone here has their favorites. I’m usually a fan of serial fiction — Fritz Leiber’s Fafhrd and the Gray Mouser tales, Jame Enge’s Morlock the Maker, Howard Andrew Jones’s Dabir and Asim novels — and I’m always on the lookout for the next breakout fantasy series.

But this year the book that most grabbed my attention was a first novel by Max Gladstone. I first saw the cover hanging on the wall at a Tor party at Wiscon in May, and I’ve been anxiously awaiting it ever since. Set in a decaying city on the verge of destruction, Three Parts Dead offers a high-stakes tale of dead gods, necromancers, and dark dealings in a richly-imagined urban landscape.

A god has died, and it’s up to Tara, first-year associate in the international necromantic firm of Kelethres, Albrecht, and Ao, to bring Him back to life before His city falls apart.

Her client is Kos, recently deceased fire god of the city of Alt Coulumb. Without Him, the metropolis’s steam generators will shut down, its trains will cease running, and its four million citizens will riot.

Tara’s job: resurrect Kos before chaos sets in. Her only help: Abelard, a chain-smoking priest of the dead god, who’s having an understandable crisis of faith.

When Tara and Abelard discover that Kos was murdered, they have to make a case in Alt Coulumb’s courts — and their quest for the truth endangers their partnership, their lives, and Alt Coulumb’s slim hope of survival.

Set in a phenomenally built world in which justice is a collective force bestowed on a few, craftsmen fly on lightning bolts, and gargoyles can rule cities, Three Parts Dead introduces readers to an ethical landscape in which the line between right and wrong blurs.

OK, count me as intrigued.

Max is in my wife’s writing group, but I haven’t read the book yet, since my wife still has a hold of our copy.

From the reading he gave at the book-signing we went to, it does sound interesting.

> Max is in my wife’s writing group,

Kristin hangs out with the coolest people. I’m glad she hung out with us at Worldcon. Someone that well connected, it’s good to have around.

[…] more stylish. Just check out his gorgeous covers for Ken Scholes Canticle, or Max Gladstone’s Three Parts Dead (or see a more complete gallery at his […]

[…] Choice of the Deathless is a corollary. Since Max is currently a John W. Campbell nominee, and his Three Parts Dead just made Reddit’s list of under-read fantasy, I thought now would be a great time to spend […]

[…] few years back I got all excited by Max Gladstone’s debut novel, Three Parts Dead, which I described as […]

[…] wrote about the first book in the sequence, Three Parts Dead, in 2012, and Two Serpents Rise in June. The fourth, Last First Snow, is not yet scheduled. Max […]

[…] First Snow, the fourth novel in the sequence following Three Parts Dead, Two Serpents Rise, and Full Fathom Five, is due to arrive in July. Here’s the […]