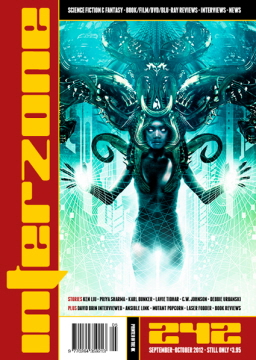 Arriving in the mail the other day was not one, but two small parcels from TTA Press, mini versions of Black Static and Interzone, now both in a more compact, dare I say it, iPad-ish, format, with spine and laminated color cover. Sort of like a book (or, if you prefer, the aforementioned  iPad).

Kinda cool. The rationale seems to be a way to pack more content at what I assume is a more inexpensive way to print it (which may also be why both issues will now come out at the same time, six times yearly,  instead of alternate months.) Even if it isn’t completely a cost issue, the new versions are quite handsome and, even better, more handy. 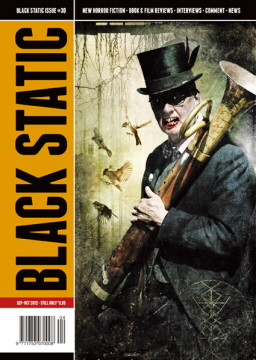 A definite updagrade. Kudos to Andy Cox and crew for trying to preserve the magazine in print format.

Hey, maybe it’s like vinyl records in a digital age: it may be a minority format, but there are people who still want to buy it (I’m one of those in both camps).

I’ve called Ken Liu the “house writer” for F&SF before (or one of them–Albert E. Cowdrey also springs to mind). But he seems to be so prolific that he’s now turning up in Interzone, and I just received the latest Analog in the mail and it too has a Liu story.

And for being so prolific, all his stories that I’ve read have been uniformly wonderful. He’s kind of like Ted Chiang in that way, only with 20 times more output!