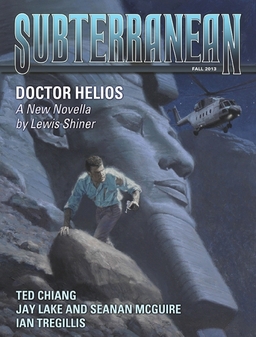 The tireless Bill Schafer has released another issue of the excellent Subterranean Magazine, right on time, continuing to make those of us who struggled with publishing deadlines look bad. Jerk.

The Fall Issue is packed with big names, too. Just check out this table of contents:

“Doctor Helios,” by Lewis Shiner
“The Truth of Fact, the Truth of Feeling,” by Ted Chiang
“Hook Agonistes,” by Jay Lake and Seanan McGuire
“What Doctor Ivanovich Saw,” by Ian Tregillis

Lewis Shiner is the author of Deserted Cities of the Heart, Frontera, Slam, and many other novels. “Doctor Helios” is a whopping 30,000 words, practically a novel in itself.

The brilliant Ted Chiang has won four Nebula awards and four Hugo awards for his short fiction — pretty good considering he’s written only 14 stories in the past 23 years. A new Chiang story is a major event, and it’s not often you’re offered one for free.

Jay Lake has been published twice in Black Gate magazine (“Fat Jack and the Spider Clown,” in BG 8 and “Devil on the Wind,” in collaboration with Michael Jasper, in BG 14); his collaborator here, Seanan McGuire, has never been published in Black Gate, but we don’t hold that against her. She has written 10 novels in the October Daye series, and (as Mira Grant) the Newsflesh trilogy and the upcoming Parasite.

I saw Ian Tregillis give a reading at the World Science Fiction Convention last year — and that man knows how to pack a room. His most recent novels are Bitter Seeds, The Coldest War, and Necessary Evil, the final book in the The Milkweed Triptych.

Subterranean is edited by William Schafer and published quarterly. The Fall 2013 issue is completely free and available here; see their complete back issue catalog here. We last covered Subterranean magazine with their previous issue, Summer 2013.

Ted Chiang doesn’t write much, but when he does, it’s usually worth tracking down.

Thanks for coming to my reading at Chicon!

(Actually, my latest novel is Necessary Evil, which is the final book in the Milkweed series 🙂

> Ted Chiang doesn’t write much, but when he does, it’s usually worth tracking down.

Agreed! Have you read his collection, Stories of Your Life and Others?

> Actually, my latest novel is Necessary Evil, which is the final book in the Milkweed series 🙂

Hi Ian! Thanks for dropping by the site.

Sorry I missed that last one. (I missed BITTER SEEDS too, until I stumbled into your reading and was hooked in about 60 seconds). I corrected the reference in the post.

Now to go hunt up a copy of NECESSARY EVIL…

You’re obviously more hip than me, since the title didn’t mean anything to me (beyond “Dr. Sun”)

That cover, however, has a delightfully retro DOC SAVAGE look to it, so I may have to check it out anyway.

We were camping all week, in gorgeous western Maryland, so I’m just catching up on the Black Gate blog, and wow, a new Ted Chiang.
I know by now you’ve probably seen me name many authors as favorites in my many comments here, but Chiang is simply amazing. I can make up for the fact that this one is free because I’ve paid for both the e-book and the dead tree version of his (sadly) only collection.
Now off to read the new story.